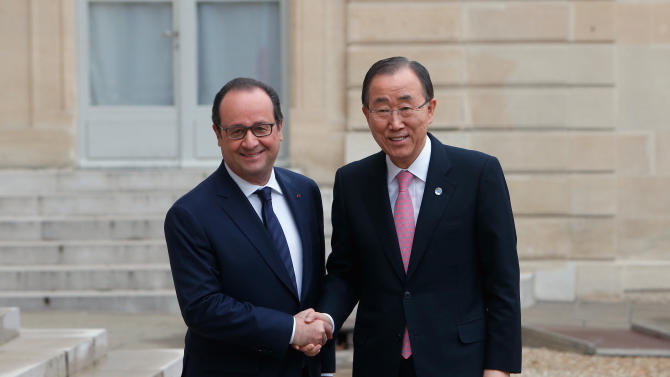 France's President Francois Hollande, left, shakes hand with Secretary General of the United Nations Ban Ki-moon, prior to a meeting at the Elysee Palace, in Paris, Sunday, Nov. 29, 2015. More than 140 world leaders are gathering around Paris for high-stakes climate talks that start Monday, and activists are holding marches and protests around the world to urge them to reach a strong agreement to slow global warming. (AP Photo/Thibault Camus)

In an interview Sunday on the eve of a U.N. climate summit in Paris, Ban told The Associated Press he endorsed plans for reviewing targets every five years.

"I would propose that the first such review session should be held before 2020," Ban said.

In Paris, governments are supposed to adopt a landmark deal to fight climate change and help vulnerable countries deal with rising seas, extreme weather events and other impacts of global warming.

More than 180 countries have submitted climate action plans before the conference, including pledges to cut or rein in heat-trapping greenhouse gas emissions after 2020, when the new deal is supposed to take effect.

However, scientific analyses show that even if those plans are implemented man-made warming is likely to reach almost 3 degrees C (5.4 F), which is beyond the 2-degree C (3.6 degree F) goal of the international talks.

"It's not enough. We have to do much more and faster to be able to contain the global temperature rise below 2 Celsius," Ban said.

Still, he said he was encouraged by the recent progress in the climate talks, which for years have been bogged down by disputes between rich and poor countries over who should do what.

"It seems to me that all the stars are aligning," Ban said. "I'm pretty optimistic that we will be able to have a very robust universal climate change agreement."

By KARL RITTER 1 hour ago