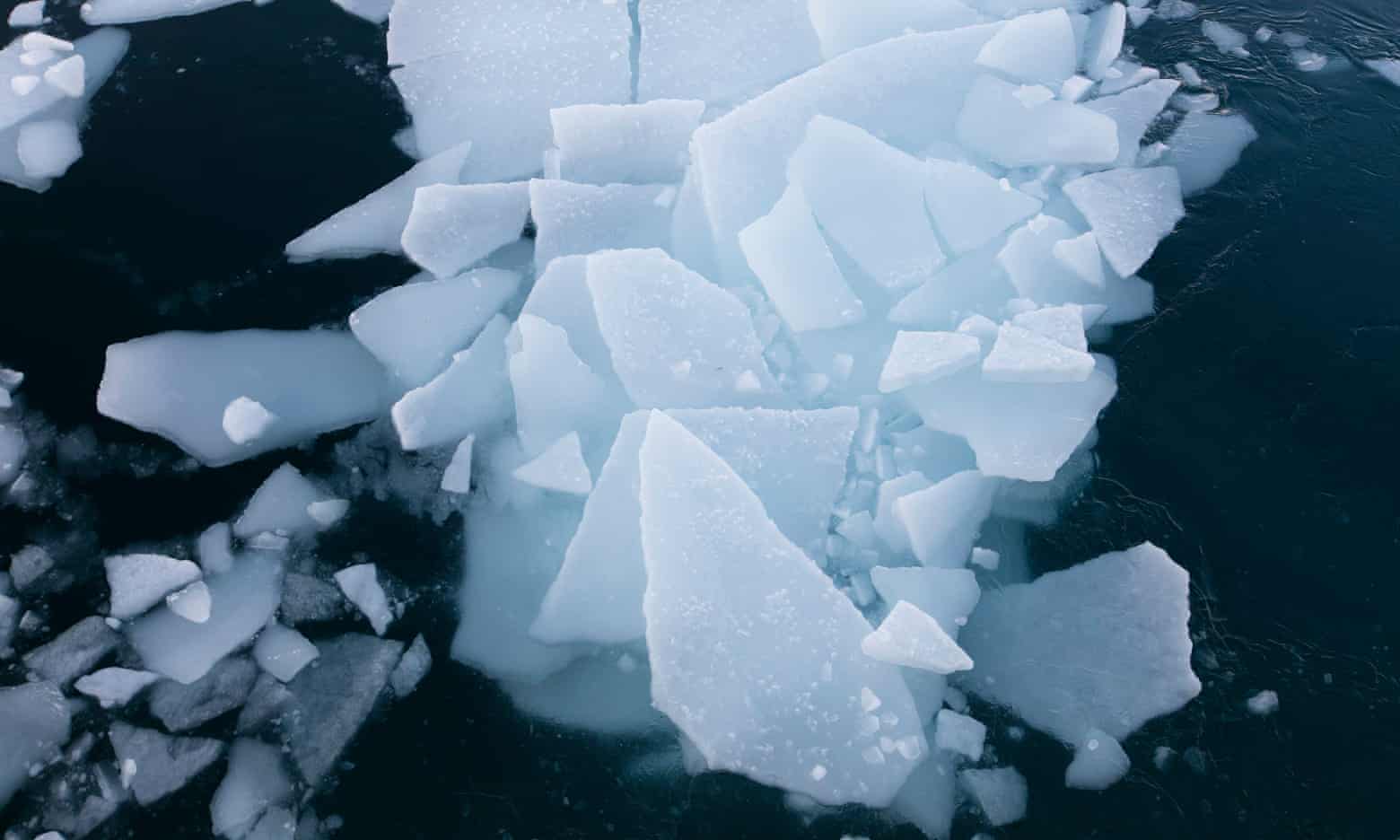 Global warming has driven the loss of about three-quarters of the northern ice cap so far. Photograph: Nick Cobbing/Greenpeace

The dramatic melting of Arctic ice is already driving extreme weather that affects hundreds of millions of people across North America, Europe and Asia, leading climate scientists have told the Guardian.

The northern ice cap has been shrinking since the 1970s, with global warming driving the loss of about three-quarters of its volume so far. But the recent heat in the Arctic has shocked scientists, with temperatures 33C above average in parts of the Russian Arctic and 20C higher in some other places.

In November, ice levels hit a record low, and we are now in “uncharted territory”, said Prof Jennifer Francis, an Arctic climate expert at Rutgers University in the US, who first became interested in the region when she sailed through it on a round-the-world trip in the 1980s.

“These rapid changes in the Arctic are affecting weather patterns where you live right now,” she said. “In the past you have had natural variations like El Niño, but they have never happened before in combination with this very warm Arctic, so it is a whole new ball game.

“It is inconceivable that this ridiculously warm Arctic would not have an impact on weather patterns in the middle latitudes further south, where so many people live.

“It’s safe to say [the hot Arctic] is going to have a big impact, but it’s hard to say exactly how big right now. But we are going to have a lot of very interesting weather – we’re not going to get around that one.” 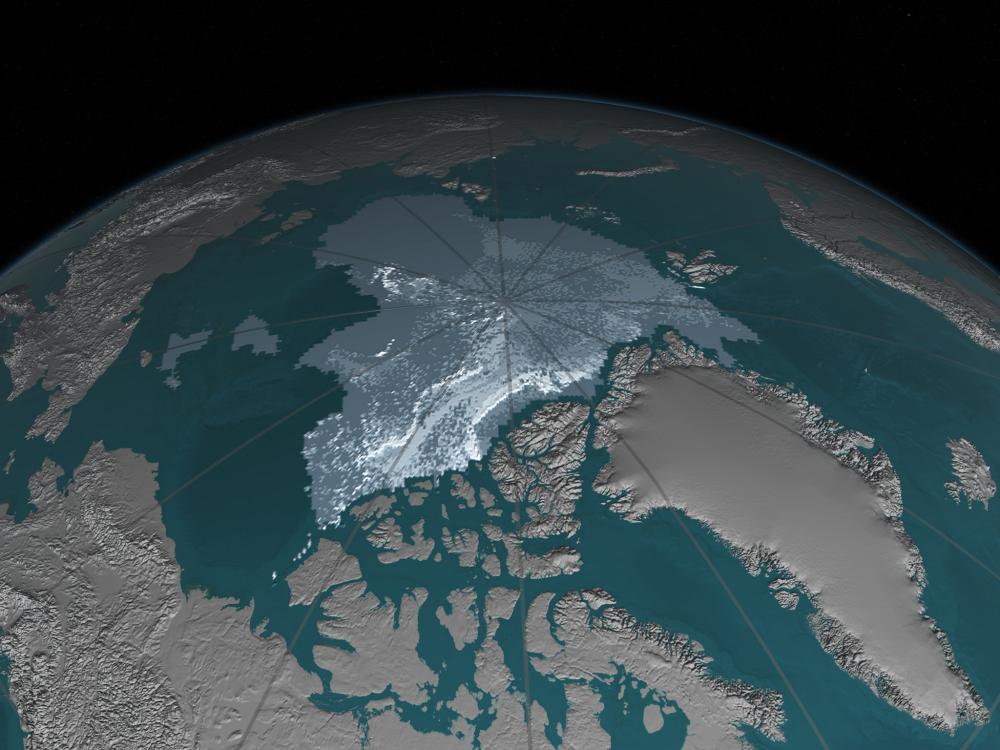 The chain of events that links the melting Arctic with weather to the south begins with rising global temperatures causing more sea ice to melt. Unlike on the Antarctic continent, melting ice here exposes dark ocean beneath, which absorbs more sunlight than ice and warms further. This feedback loop is why the Arctic is heating up much faster than the rest of the planet.

This in turn narrows the temperature difference between the Arctic and lower latitudes, which is crucial because it is the temperature gradient between them that drives the jet stream wind, which streaks around the pole at up to 250mph and about 8km above the surface.

The jet stream forms a boundary between the cold north and the warmer south, but the lower temperature difference means the winds are now weaker. This means the jet stream meanders more, with big loops bringing warm air to the frozen north and cold air into warmer southern climes.

Furthermore, researchers say, the changes mean the loops can remain stuck over regions for weeks, rather than being blown westwards as in the past. This “blocking” effect means extreme events can unfold.

“There have been recent studies showing very plausible physical mechanisms of how rapid warming in the Arctic can influence weather in the mid latitudes, both in summer and winter,” said Dim Coumou at the Potsdam Institute for Climate Impact Research in Germany. Coumou is a former offshore industry geophysicist who has studied the link between extreme weather events and global warming since 2010.

“A couple of years ago this was the main criticism on any such links, that the physics was not well understood,” he said. “But the big question [now] is, how important are these mechanisms?”

The other main influence on the jet stream is sea surface temperature in the tropics, which waxes and wanes with El Niño, while solar cycles and even volcanic eruptions have smaller effects.

The clearest connection so far between the melting Arctic and weather is for extreme winter conditions, such as the intense winters that hit parts of North America and northern Europe in 2009-10, 2010-11 and 2013-14, causing record snowfalls and billions of dollars of damage.

In those years, the jet stream deviated deeply southwards over those regions, pulling down savagely cold air. Prof Adam Scaife, a climate modelling expert at the UK’s Met Office, said the evidence for a link to shrinking Arctic ice was now good: “The consensus points towards that being a real effect.”

While downswings of the jet stream can bring freezing winters, the accompanying upswings have been linked to worsening the drought in California. “These northward jet stream swings are of course the reason California is having such a terrible drought,” said Francis. This effect was in fact predicted back in 2004, with those researchers now saying: “Reality is moving faster than we thought or hoped it would.”

But the winter extremes can also swing the other way and bring mild but torrential weather, as seen in the past two winters in the UK, leading to severe flooding, said Prof Edward Hanna, at the University of Sheffield in the UK.

150 years of global warming in a minute-long symphony

He pointed to the North Atlantic Oscillation (NAO), a cyclic variation in air pressure that may be affected by the fast melting of Arctic ice. The variability of the NOA has doubled in the last century, he said: “Within the last decade, there have been wild swings in the NAO values in December.”

The connection between the vanishing Arctic ice and extreme summer weather in the northern hemisphere is probable, according to scientists, but not yet as certain as the winter link.

Blocking patterns caused by slow-moving meanders of the jet stream have been firmly linked to some devastating events, including the 2010 summer floods in Pakistan, which killed 2,000 people and affected 20 million, and also the searing heatwave in Russia in the same year, which killed 50,000 people and wiped out $15bn (£12bn) of crops. 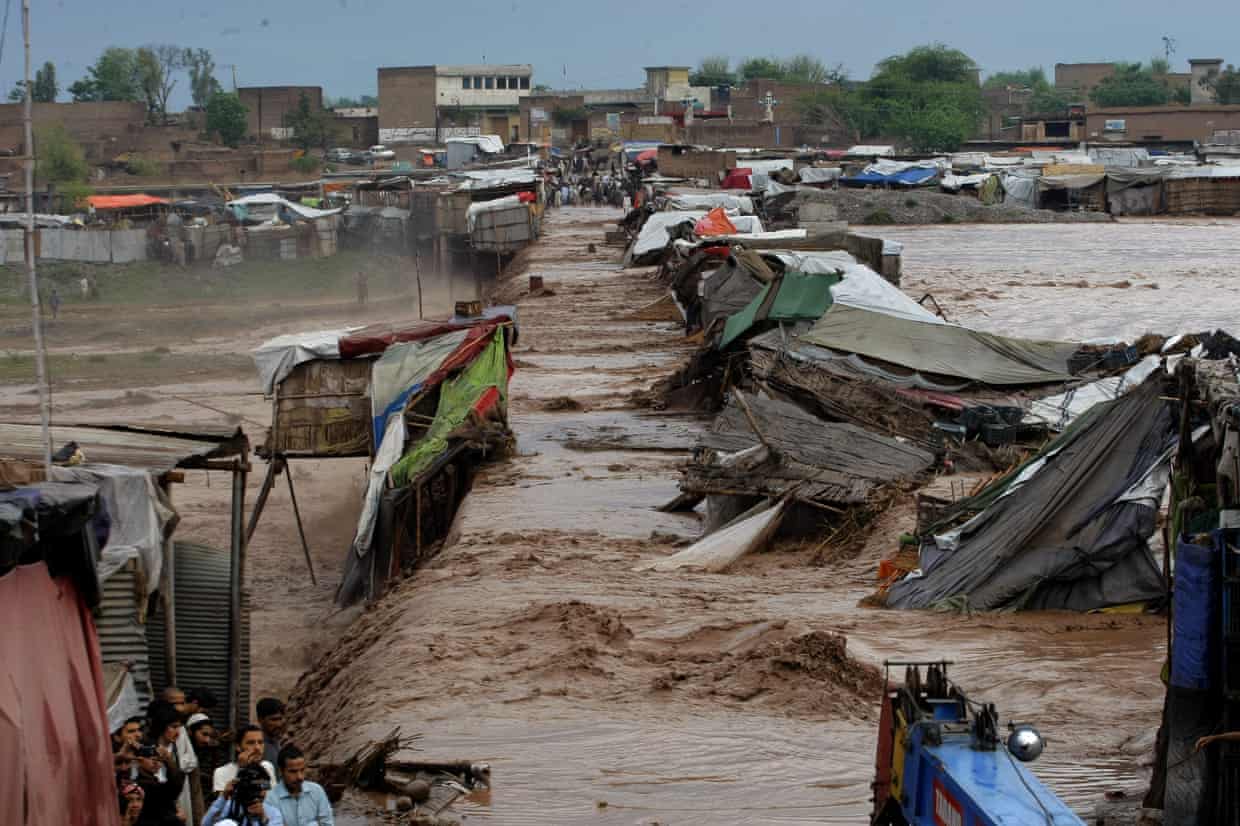 Villagers stand outside their homes during flash floods on the outskirts of Peshawar, Pakistan, on April 2016. Photograph: Mohammad Sajjad/AP

Blocking events have also been linked to summer deluges in the UK, leading to disastrous flooding in 2007 and 2012 which caused billions of pounds in damage.

The year 2012 was also an extreme year for Greenland, with record melting across its entire surface flushing water into the ocean and accelerating sea level rise. The hot loop of air that sat on Greenland that year may also be linked to one of the biggest weather disasters of recent years: Hurricane Sandy, which killed 233 people and cost $75bn in damages.

Scientists suspect that the blocking event over Greenland, potentially linked to the record low Arctic ice that summer, prevented the hurricane veering north-east out into the Atlantic like most storms. Instead, blocked by the high pressure, Sandy swung left over the most populated area of the east coast of the US. 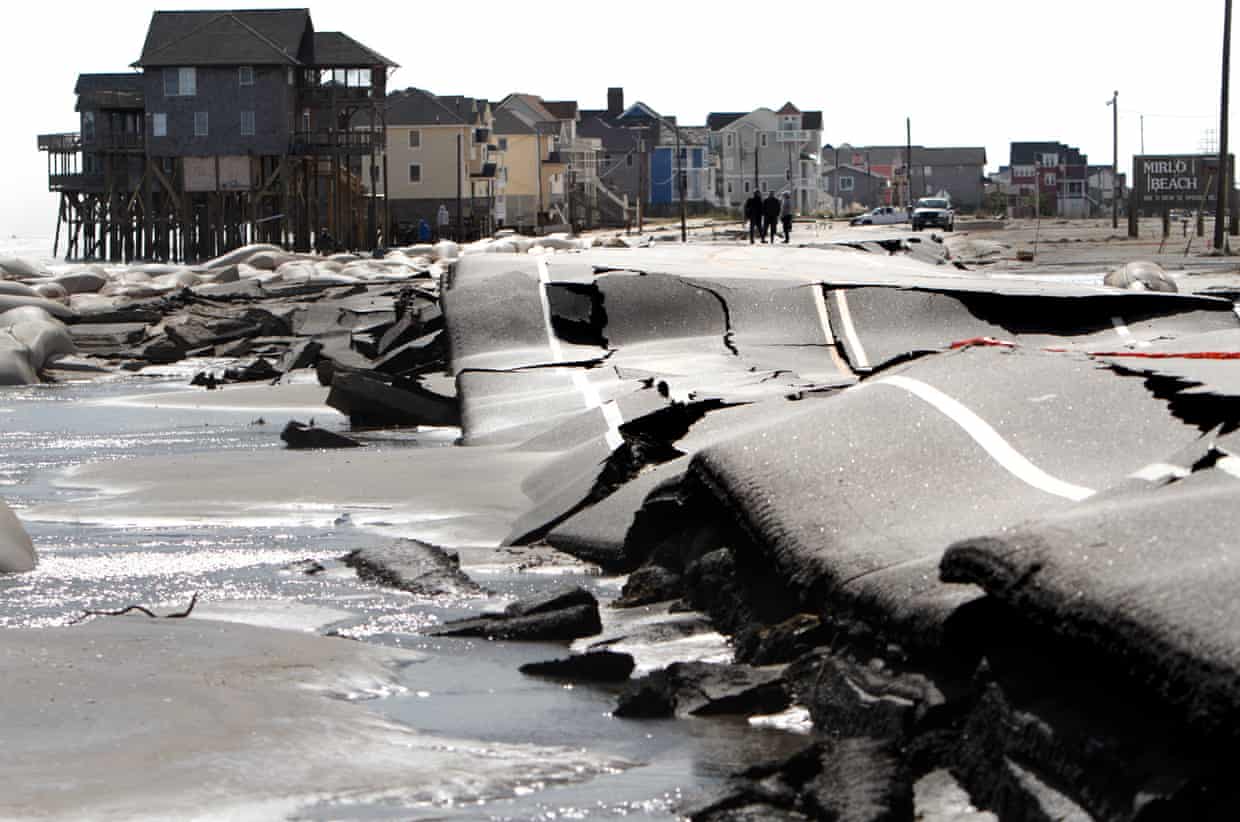 Another consequence of the fast melting Arctic raises the possibility that there may be even worse extreme weather to come, according to a few scientists: titanic Atlantic superstorms and hurricanes barreling across Europe.

The melting of Greenland ice is pouring about 250bn tonnes a year of fresh water, which is less dense than salty sea water, into the ocean. As a result, the water mass sinks less and the current that drags warm water up the Atlantic is weakened – scientists have already found that the current is at its weakest for a millennium.

This means a region of the north Atlantic is becoming relatively cool and this exaggerates the contrast with tropical waters to the south, which is the driver for storms. In the worst case scenario, said the renowned climate scientist Prof James Hansen, this “will drive superstorms, stronger than any in modern times – all hell will break loose in the north Atlantic and neighbouring lands”.

Hansen– who was one of the first scientists to alert the world to the dangers of climate change in 1988 and has been arrested more than once outside the White House while protesting against fossil fuel developments – pointed to the historical record as a precedent: 118,000 years ago a superstorm tossed 1,000-tonne mega boulders on to the shores of the Bahamas. 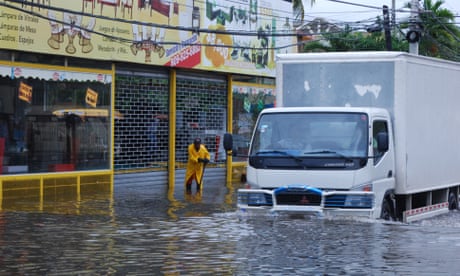 “I would certainly not call such [superstorm] scenarios ridiculous,” said Coumou. “But it is speculative – we don’t have the hard evidence.”

But even with what is known so far, there is cause for concern that the complex interactions are turning the slow burn of global temperature rise into sudden weather disasters.

“The worrying aspect is that such dynamical changes can occur more abruptly than simple background warming of the climate,” said Coumou. “Dynamical changes can change more rapidly and can therefore lead to surprises and I think there are many such possibilities in the system.” 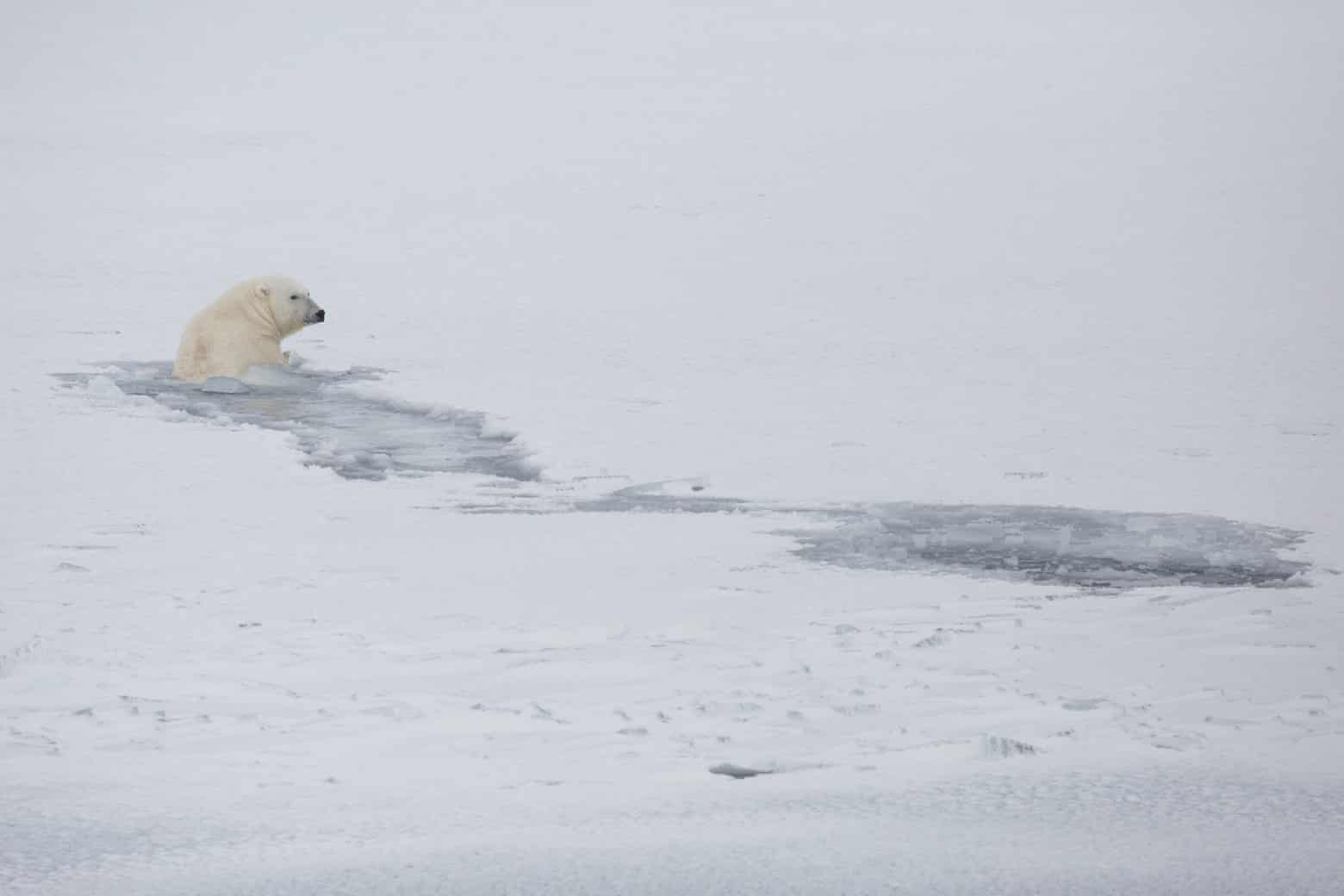 A polar bear swims in Svalbard. The fjords there would usually be partially covered with sea ice, but last winter most of the archipelago was surrounded by open water. Photograph: Nick Cobbing/Greenpeace

Amid the gloomy prospects, there is some cause for hope however.

“A large fraction of the US public still doesn’t believe that it is humans that are affecting the climate system,” said Francis. “But one of the silver linings of this pretty dark cloud is that the Arctic is such an obvious and conspicuous change, that anybody can see them happening. There is no ambiguity whatsoever.”

But this changing of minds needs to happen quickly, said Hansen: “If we wait for the natural world to reveal itself clearly, it may be too late.”