Arctic scientists have warned that the increasingly rapid melting of the ice cap risks triggering 19 “tipping points” in the region that could have catastrophic consequences around the globe.

The Arctic Resilience Report found that the effects of Arctic warming could be felt as far away as the Indian Ocean, in a stark warning that changes in the region could cause uncontrollable climate change at a global level.

“The warning signals are getting louder,” said Marcus Carson of the Stockholm Environment Institute and one of the lead authors of the report. “[These developments] also make the potential for triggering [tipping points] and feedback loops much larger.”

Climate tipping points occur when a natural system, such as the polar ice cap, undergoes sudden or overwhelming change that has a profound effect on surrounding ecosystems, often irreversible.

‘No one’s an exception’: toll of climate change, from US to the Marshall Islands – video

In the Arctic, the tipping points identified in the new report, published on Friday, include: growth in vegetation on tundra, which replaces reflective snow and ice with darker vegetation, thus absorbing more heat; higher releases of methane, a potent greenhouse gas, from the tundra as it warms; shifts in snow distribution that warm the ocean, resulting in altered climate patterns as far away as Asia, where the monsoon could be effected; and the collapse of some key Arctic fisheries, with knock-on effects on ocean ecosystems around the globe.

The research, compiled by 11 organisations including the Arctic Council and six universities, comes at a critical time, not only because of the current Arctic temperature rises but in political terms.

Aides to the US president-elect, Donald Trump, this week unveiled plans to remove the budget for climate change science currently used by Nasa and other US federal agencies for projects such as examining Arctic changes, and to spend it instead on space exploration.

“That would be a huge mistake,” said Carson, noting that much more research needs to be done on polar tipping points before we can understand the true dangers, let alone hope to tackle them. “It would be like ripping out the aeroplane’s cockpit instruments while you are in mid-flight.” 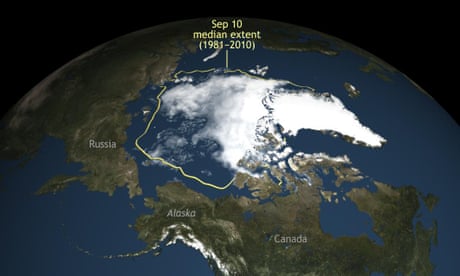 He added: “These are very serious problems, very serious changes are happening, but they are still poorly understood. We need more research to understand them. A lot of the major science is done by the US.”

Scientists have speculated for some years that so-called feedback mechanisms – by which the warming of one area or type of landscape has knock-on effects for whole ecosystems – could suddenly take hold and change the dynamics of Arctic ice melting from a relatively slow to a fast-moving phenomenon with unpredictable and potentially irreversible consequences for global warming. For instance, when sea ice shrinks it leaves areas of dark ocean that absorb more heat than the reflective ice, which in turn causes further shrinkage, and so on in a spiral.

The Arctic ice cap helps to cool sea and air temperatures, by reflecting much of the sun’s radiation back into space, and acting as a global cooler when winds and ocean currents swirl over and under it. It has long been known to play a key part of the global climate system, but the difficulty and expense of close monitoring have meant that scientists have only in recent years been able to make detailed assessments.

The report, billed as the first comprehensive study of ecosystems and societies in the region, found: “The potential effects of Arctic regime shifts [or tipping points] on the rest of the world are substantial, yet poorly understood. Human-driven climate change greatly increases the risk of Arctic regime shifts, so reducing global greenhouse gas emissions is crucial to reducing this risk.

150 years of global warming in a minute-long symphony

The authors also warned that people living in and near the Arctic would be badly affected, and called for communities to be provided with equipment and skills to survive. They took evidence from a variety of settlements in the region, finding many signs of stark changes already under way.

Joel Clement, co-chair of the project and director of the office of policy analysis at the US Department of the Interior, said: “This groundbreaking report is an unprecedented effort to gain insight from what is happening on the ground. The findings are foundational to a more informed, coordinated response to building resilience across the region.”