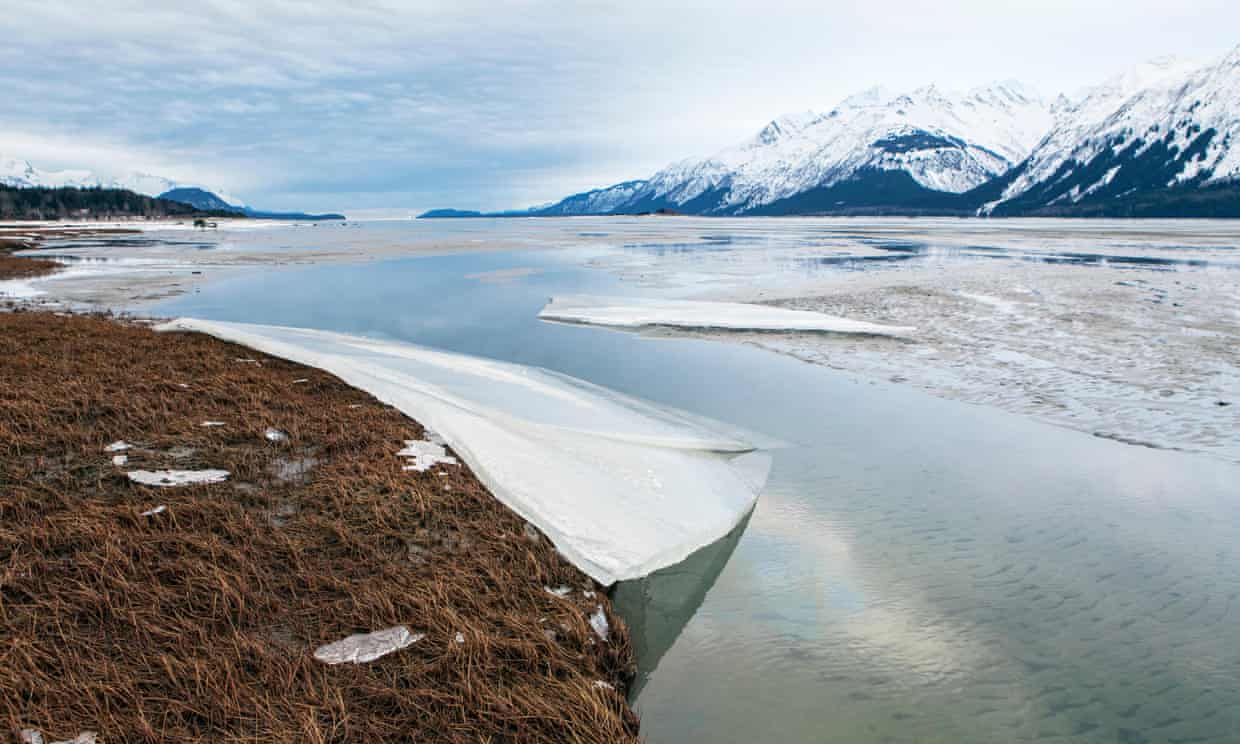 Melting ice on the Chilkat river near Haines, Alaska, in January 2016. This winter scientists said the Arctic freeze stalled early on, across the polar seas. Photograph: Michele Cornelius/Alamy

With the ice cover down to 14.52m sq km, scientists now believe the Arctic is locked onto a course of continually shrinking sea ice...

A record expanse of Arctic sea never froze over this winter and remained open water as a season of freakishly high temperatures produced deep – and likely irreversible – changes on the far north.

Scientists at the National Snow and Ice Data Centre said on Monday that the sea ice cover attained an average maximum extent of 14.52m sq km (5.607m sq miles) on 24 March, the lowest winter maximum since records began in 1979.

“I’ve never seen such a warm, crazy winter in the Arctic,” said NSIDC director Mark Serreze. “The heat was relentless.”

It was the third straight month of record lows in the sea ice cover, after extreme temperatures in January and February stunned scientists.

The winter months of utter darkness and extreme cold are typically the time of maximum growth in the ice cap, until it begins its seasonal decline in spring.

With the ice cover down to 14.54m sq km, scientists now believe the Arctic is locked onto a course of continually shrinking sea ice – and that is before the 2016 melt season gets underway.

“If we are starting out very low that gives a jump on the melt season,” said Rick Thoman, the climate science manager for the National Weather Service’s Alaska region.

“For the last few years, we have had extremely low ice cover in the summer. That means a lot more solar energy absorbed by the darker open water. That heat tends to carry over from year to year.”

After this winter’s record ice lows, scientists now expect more than ever that the Arctic will be entirely ice-free in the summer months within 20 or 25 years.

“Sometime in the 2030s or 2040s time frame, at least for a few days, you won’t have ice out there in the dead of summer,” said Dr John Walsh, chief scientist of the International Arctic Research Centre.

Those changes are already evident on the ground. In 1975, there were only a few days a year when ships could move from Barrow to Prudhoe Bay off the north coast of Alaska. Now that window lasts months.

The Arctic will always have ice in the winter months, Walsh said. But it will be thinner and more fragile than the multi-year ice, and less reliable for indigenous peoples who rely on the ice as winter transport routes or hunting platforms.

“It’s not just about how many hundreds of thousands of square kilometres covered by the ice. It’s about the quality of that ice,” Thoman said.

The extent of ice cover is a critical indicator of the changes taking place in the Arctic – but the shrinking of the polar ice carries sweeping consequences for lower latitudes as well.

The bright white snow-covered ice reflects about 85% of sunlight back into the atmosphere, compared to the dark surfaces of the open water which absorb most of the heat energy.

“Basically the polar regions are the refrigerator for the Earth,” said Dr Donald Perovich, a researcher at Dartmouth University. “They are extremely important for being able to keep the Arctic colder, and in turn help keep the rest of the planet colder.”

Since 1980, however, the summer sea ice cover over the Arctic has gone into a drastic decline, from 7.8m sq km to 4.4m sq km in 2012, before rebounding slightly. “It would be as if the entire United States east of the Mississippi melted away plus the states from Minnesota down to Louisiana, past North Dakota, South Dakota, Nebraska, Kansas and Oklahoma. It’s huge,” Perovich said.

This winter scientists said the Arctic freeze stalled early on, across the polar seas. The sea ice extent was exceptionally low both in the Barents and the Bering seas – which in past years has been one of the most prolific producers of ice. And it was thinner, especially in the Beaufort sea north of Alaska, scientists said.

Fort Yukon has recorded Alaska’s coldest ever temperatures but this winter temperatures have been much warmer than usual, leading to dangerously thin ice

There were a number of causes, in addition to the record high temperatures and carry-over effects of earlier ice loss.

The El Niño weather system produced more warming, and the Arctic saw influxes of exceptionally warm water from the Pacific as well as the Atlantic side.

In any event, Walsh said it was becoming increasingly clear the Arctic would never return to its previous frozen state, even if there are small gains in ice cover in a single year.

“The balance is shifting to the point where we are not going back to the old regime of the 1980s and 1990s,” he said. “Every year has had less ice cover than any summer since 2007. That is nine years in a row that you would call unprecedented. When that happens you have to start thinking that something is going on that is not letting the system go back to where it used to be.”