ARE DROUGHT CONDITIONS IN THE US SOUTHWEST HERE TO STAY? 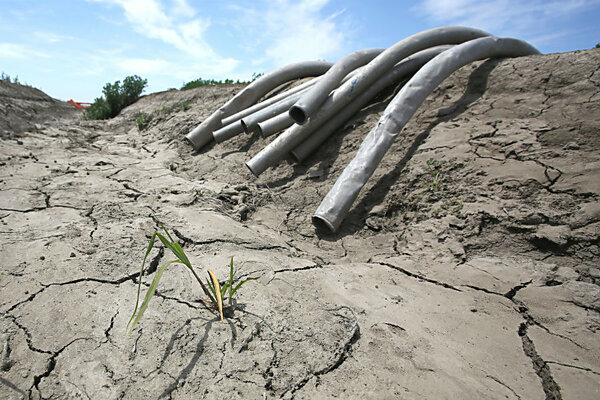 Irrigation pipes sit along a dried irrigation canal on a field farmed by Gino Celli near Stockton, Calif. last spring amid some of the broadest water cuts on record. Rich Pedroncelli/AP/File

A new study suggests that extremely dry conditions may now be standard in the central and western US, as precipitation and storms there have seen a marked decrease through the past decades.

A new study suggests that dry conditions in the southwestern United States, including the ongoing California drought, may become standard.

The study, published in Geophysical Research Letters, analyzes weather types to demonstrate how the American Southwest has already shifted to a much drier climate system than it once had, along with showing a downward trend in overall precipitation. The research, which uses data from 1979 to 2014 collected from across the contiguous United States, could show that the dry pattern will continue into the future.

“A normal year in the Southwest is now drier than it once was,” said Andreas Prein, the leader of the study and a research fellow at the National Center for Atmospheric Research (NCAR), in a release from the center.

“If you have a drought nowadays, it will be more severe because our base state is drier,” he said.

To gather information on precipitation processes, the researchers analyzed daily sea pressure, atmospheric water depth, and wind speeds over a period of 35 years. Trends in five US regions – the Northwest, Southwest, Midwest, Northeast, and South – were studied, with each area divided into three subregions where the precipitation analyses were performed.

The data showed that areas such as the Pacific Southwest were especially reliant on only a few weather types, and were markedly affected by changes there. The weather types that provide almost two-thirds of the precipitation to that region, for example, were the ones that “significantly decrease[d] in frequency” over the period of study, leading to the dry conditions throughout the Southwest.

“The weather types that are becoming more rare are the ones that bring a lot of rain to the southwestern United States,” said Dr. Prein. “Because only a few weather patterns bring precipitation to the Southwest, those changes have a dramatic impact.”

While the final trends showed an increase in precipitation frequency and intensity throughout much of the Atlantic coast and Northeast, the Central Plains and most of the western US were shown to have a decreasing trend decade-over-decade in weather type frequency, although some of the region saw an increase in intensity. Even so, without a steady source of water, even the bigger, stronger storms may still not be enough to provide the necessary water to western regions. And with the added warming effects of climate change, less precipitation further aggravates drought conditions.

“As temperatures increase, the ground becomes drier and the transition into drought happens more rapidly,” said Greg Holland, one of the study’s co-authors and a senior NCAR scientist. “In the Southwest the decreased frequency of rainfall events has further extended the period and intensity of these droughts.”

So while a variety of factors have led to the ongoing drought, “[Weather type] frequency shifts are the dominant driver for decreasing precipitation in the US Southwest,” and the conclusions of the researchers “support projections of climate models that show a pronounced increase of droughts and aridity in the Southwest during the latter half of the 21st century.”

California recently extended its emergency water conservation measures through the fall, and the effects of this year’s El Niño storms still unknown. But experts are hoping the intense rain and snowfall will aid in hydrating the state’s land and resources, at least for the time being, and the new information brought forward by the NCAR study could help the region prepare for the coming years of dryness.

“Understanding how changing weather pattern frequencies may impact total precipitation across the US is particularly relevant to water resource managers as they contend with issues such as droughts and floods, and plan future infrastructure to store and disperse water,” said Mari Tye, an NCAR project scientist and co-author on the study.