AROUND THE MEDITERRANEAN, THE FIRE THIS TIME... 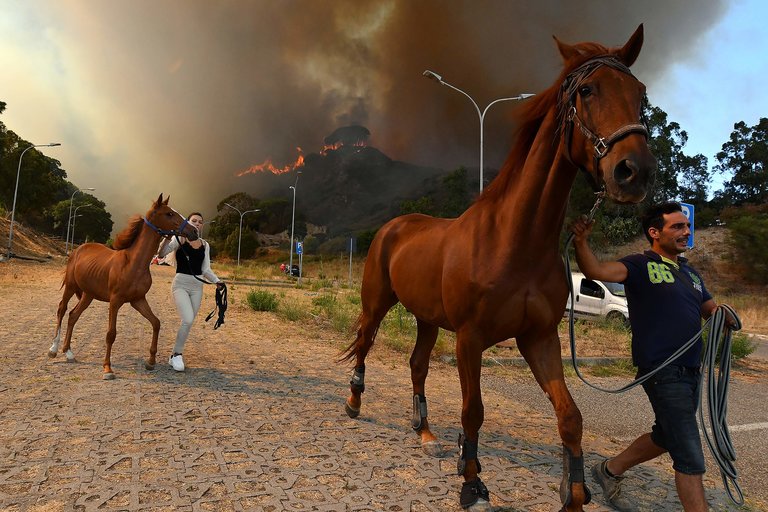 Lu Fraili, Sardinia — As my husband and I drove back from dinner one evening last month, we were stunned by something I had never seen in 25 years of summer visits to Sardinia: a corona of flames on the scrub-covered hills above the city of San Teodoro. We feared for the town we’ve known so well, and even for our home here, only about four miles away...

The next day bright yellow Canadair water-bomber planes headed out over the Mediterranean to scoop up the sea, then circled back to drench the burning hills. More than 1,000 people had been evacuated from the San Teodoro area the night before, we learned, and at least two homes had been lost to the flames.

Drought, devilish winds and historic heat have unleashed vicious wildfires across southern Europe this summer. In June, more than 60 people died in a blaze that whipped through a forest in Portugal. Since then, hundreds of fires in Spain, France, Croatia, Montenegro, Greece, Italy and elsewhere have burned thousands of acres, killed untold numbers of wild animals and forced the evacuation of thousands of people, including many tourists. Fires in Sardinia forced the evacuation of a prison, with prisoners spending the night on a nearby beach.

While forest fires are a normal feature of summer in Mediterranean Europe, the frequency and intensity of the blazes this summer are exceptional. The unprecedented heat that has stoked them, and caused droughts like the one that led to water rationing in Rome, is a harbinger of what climate change will bring, scientists say.

In the past week winds from North Africa — which the Italians aptly call Lucifero — have caused hellish temperatures across Italy. The heat index (what the temperature feels like) reached a record 50 degrees Celsius, or 122 degrees Fahrenheit, in Sardinia last Tuesday. That day, a 71-year-old man died of a heart attack triggered by the sweltering temperatures while tending his vegetable garden in a town near Sardinia’s capital, Cagliari.

Drought has threatened the livelihoods of many Sardinians. Farmers and shepherds blocked a portion of Sardinia’s main highway in June to attract attention to their plight. Without help, many on this drought-stricken island fear they will lose their farms and flocks. The boulder-littered canyons and sheer stone cliffs rising from the Mediterranean that give Sardinia its wild beauty also make it difficult to combat wildfires. The very survival of this island’s pastoral heart — its cheeses, wine and carpets woven from local wool — will be at risk if summers like this one, or worse, become the norm.

The difficulties of rural life elsewhere in the Mediterranean may have indirectly created conditions for wildfires. As people moved to cities, vast areas where farms once broke up tracts of forest and herds of domestic animals chewed the underbrush low, have reverted to forests thick with brush. Officials are encouraging new activity in these abandoned areas, like truffle farms or vineyards, to create “green firebreaks” and ecosystems more resistant to forest fires.

But more conventional fire control methods are needed too: Clearing firebreaks to stop the spread of forest fires, keeping homes free of surrounding brush, and setting controlled fires to burn underbrush and to thin dense young forests. We were shocked on a recent road trip by the blackened landscape that greeted our arrival in the city of Iglesias, where fire had torn across brush and trees that led right up to the city’s edge.

Europe generally needs to be better prepared. Firefighting crews in southern Europe are exhausted, and equipment is stretched thin, especially the Canadair water-bombing planes, which are crucial for remote, hilly areas. Last month, Italy, itself battling nearly 900 separate fires at one point, lent a Canadair to France as it fought a major fire on the Riviera near Nice.

The European Union, member nations and local authorities must buy more equipment and fund and train more firefighting crews, including community volunteers, before next summer’s season of fire begins. As the earth heats up, year by year, the risk of fire will only increase.