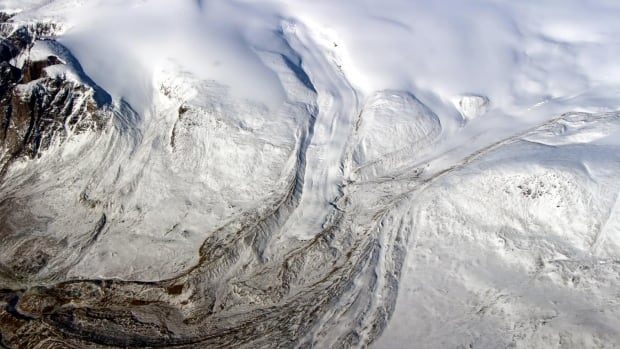 Canada's glaciers and ice caps are now a major contributor to sea level change, a new UCI study shows. Ten times more ice is melting annually due to warmer temperatures. Seen here is the edge of the Barnes Ice Cap in May 2015. (NASA/John Sonntag)

Canada's glaciers are responding rapidly to a warming Arctic and are a major contributor to sea level rise, a new study suggests.

Researchers from the University of California Irvine studied data collected from 1991 to 2015 on glaciers found in the Queen Elizabeth Islands in the Arctic. They found that, from 2005 to 2015, surface melt off of these glaciers rose by 900 per cent — something they say is attributable to warming air temperatures in the region. 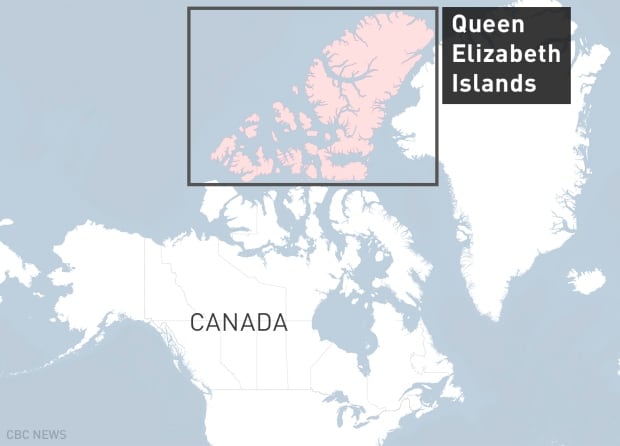 There are two ways in which glaciers lose ice: surface melt and the discharge of icebergs, known as calving.

Before 2005, the mass lost from glaciers in the Queen Elizabeth Islands was shared almost equally between the two, at 48 and 52 per cent respectively. However, after 2005, surface melt became the major contributor of ice loss: it now accounts for 90 per cent of total losses in the region.

They have gone from shedding three gigatons of water annually to 30 gigatons — something that has serious consequences. 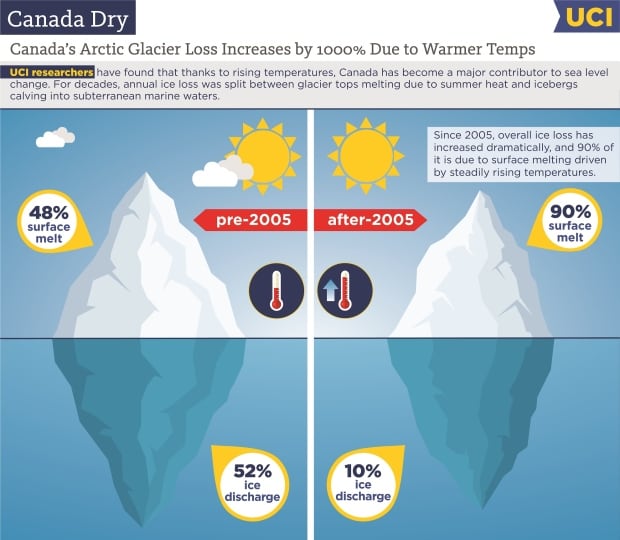 This infographic illustrates how glacier loss has changed within a decade in the Canadian Arctic. (UCI)

While Greenland and Antarctica hold the most freshwater in the world in the form of glaciers and ice sheets, Canada hold its fair share as well. The country is home to about 20 per cent of the world's glaciers and, as a result, is the third-largest contributor to sea level change.

If the planet continues to warm in response to carbon dioxide being pumped into the atmosphere, this could accelerate glacier loss in the North and raise sea levels, threatening delicately balanced ecosystems.

Glaciers are masses of ice that begin on land and form over hundreds or thousands of years. They can extend hundreds of kilometres out into oceans and are a major source of food for sea birds and seals.

"In the 20-plus years or so that I've been working up there, we've had radical change in the climate regime and very dramatic changes in what the glaciers look like in terms of how they behave and the extent to how they're delivering water into the ocean," said Martin Sharp, a glaciologist at the University of Alberta who was not associated with the study.

The researchers suspect that as temperatures continue to rise, the surface melt will continue and possibly accelerate.

"What we can expect is that the glacier will retreat to higher ground and surface melt will be 100 per cent," said the study's lead author, Romain Millan.

The extent of the effects this melting has on the ecosystem isn't entirely clear, though Sharp said scientists are looking at what the effects are on the seals and birds who feed off the tips of the glaciers.

More concerning is recent findings of volatile contaminants — such as PCBs and DDTs — that have been turning up in marine life.

When released, these volatiles are taken up into the atmosphere. However, when they reach cold temperatures they condense, rain back down and become trapped in glaciers.

Researchers are finding "fairly significant accumulation" of these compounds in the food chain, Sharp said, as glaciers continue to melt, particularly in the North where the volatiles accumulate. 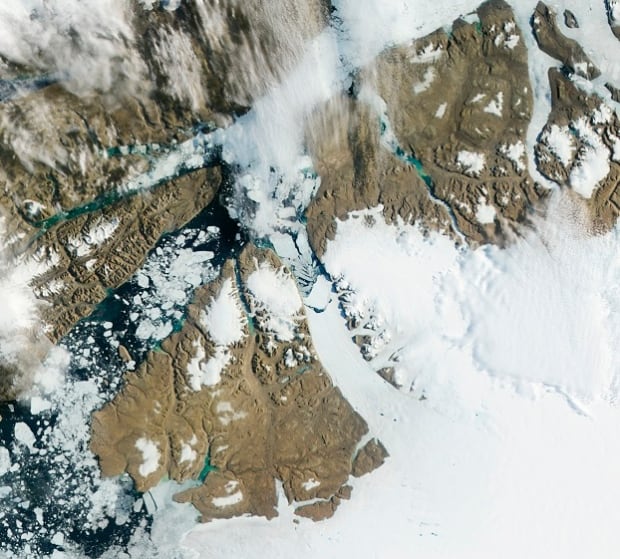 The Petermann Glacier in Greenland experienced a major calving event in 2012. (NASA/NOAA/Aqua - MODIS)

Sharp also said that sea level is anticipated to rise by as much as half a metre within the next 50 years. That could displace populations along world's coasts, not just due to mean sea levels, but the danger posed by storm surges and hurricanes.

"There are two billion people who live within two metres of contemporary sea level," he said. "The scale of the refugee program that could be generated by significant sea level rise could make what's been going on in Europe in the last two years look trivial by comparison."