AS CLIMATE CHANGES, SOUTHERN STATES WILL SUFFER MORE THAN OTHERS... 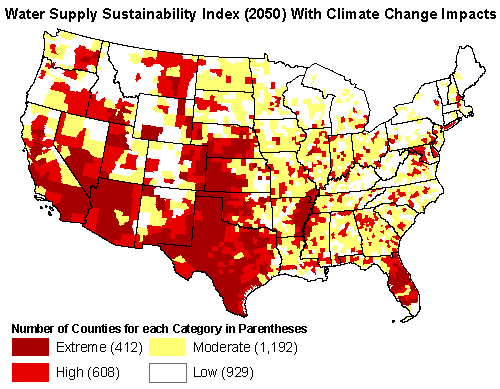 As the United States confronts global warming in the decades ahead, not all states will suffer equally. Maine may benefit from milder winters. Florida, by contrast, could face major losses, as deadly heat waves flare up in the summer and rising sea levels eat away at valuable coastal properties...

In a new study in the journal Science, researchers analyzed the economic harm that climate change could inflict on the United States in the coming century. They found that the impacts could prove highly unequal: states in the Northeast and West would fare relatively well, while parts of the Midwest and Southeast would be especially hard hit.

In all, the researchers estimate that the nation could face damages worth 0.7 percent of gross domestic product per year by the 2080s for every 1 degree Fahrenheit rise in global temperature. But that overall number obscures wide variations: The worst-hit counties — mainly in states that already have warm climates, like Arizona or Texas — could see losses worth 10 to 20 percent of G.D.P. or more if emissions continue to rise unchecked.

“The reason for that is fairly well understood: A rise in temperatures is a lot more damaging if you’re living in a place that’s already hot,” said Solomon Hsiang, a professor of public policy at the University of California, Berkeley, and a lead author of the study.

“You see a similar pattern internationally, where countries in the tropics are more heavily impacted by climate change,” he said. “But this is the first study to show that same pattern of inequality in the United States.”

The greatest economic impact would come from a projected increase in heat wave deaths as temperatures soared, which is why states like Alabama and Georgia would face higher risks while the cooler Northeast would not. If communities do not take preventative measures, the projected increase in heat-related deaths by the end of this century would be roughly equivalent to the number of Americans killed annually in auto accidents.

Higher temperatures could also lead to steep increases in energy costs in parts of the country, as utilities may need to overbuild their grids to compensate for heavier air-conditioning use in hot months. Labor productivity in many regions is projected to suffer, especially for outdoor workers in sweltering summer heat. And higher sea levels along the coasts would make flooding from future hurricanes far more destructive.

The authors avoided delving into politics, but they warned that “climate change tends to increase pre-existing inequality.” Some of the poorest regions of the country could see the largest economic losses, particularly in the Southeast. That pattern would hold even if the world’s nations cut emissions drastically, though the overall economic losses would be considerably lower.

Predicting the costs of climate change is a fraught task, one that has bedeviled researchers for years. They have to grapple with uncertainty involving population growth, future levels of greenhouse-gas emissions, the effect of those emissions on the Earth’s climate and the economic damage higher temperatures may cause.

Previous economic models have been relatively crude, focusing on broad global impacts. The new study, led by the Climate Impact Lab, a group of scientists, economists and computational experts, took advantage of a wealth of recent research on how high temperatures can cripple the economy. And the researchers harnessed advances in computing to scale global climate models down to individual counties in the United States.

“Past models had only looked at the United States as a single region,” said Robert E. Kopp, a climate scientist at Rutgers and a lead author of the study. “They missed this entire story of how climate change would create this large transfer of wealth between states.”

There are still limitations to the study. It relies heavily on research showing how hot weather has caused economic losses in the past. But society and technology will change a lot over the next 80 years, and people may find novel ways to adapt to steadily rising temperatures, said Robert S. Pindyck, an economist at the Massachusetts Institute of Technology who was not involved with this study.

Urban planners could set up cooling centers during heat waves to help vulnerable people who lack air-conditioning, as France did after a heat wave killed 14,802 people in 2003. Farmers may adopt new crop varieties or shift planting patterns to cope with the rise in scorching heat.

Notably, the model also does not account for the effects of future migration within the United States. If Arizona becomes unbearable because of rising temperatures, more people may decide to move to states like Oregon or Montana, which would largely escape intolerable heat waves and could even see an increase in agricultural production. Such migration could reduce the country’s overall economic losses, said Matthew E. Kahn, an economist at the University of Southern California.

Other outside experts praised the study, but cautioned that it may have underestimated certain kinds of damages. Economic losses on the coasts could be far higher if ice sheets in Antarctica and Greenland disintegrate faster than expected. And climate change could bring other calamities that are harder to tally, such as the loss of valuable ecosystems like Florida’s coral reefs, or increased flows of refugees from other countries facing their own climate challenges.

The study also does not factor in how reduced labor productivity could compound over time, leading to slower rates of economic growth, said Frances C. Moore, a climate expert at the University of California, Davis.

The researchers at the lab plan to expand their model to include more possible impacts and provide a detailed view of what individual counties can expect, so policymakers can begin to prepare far in advance.

“That’s the hope, that this research can help prevent many of these outcomes,” said Trevor Houser, a co-author of the paper who helps direct the Climate Impact Lab. “If cities take action to prevent heat wave deaths by building cooling centers, then costs would be lower than we project. But I wouldn’t see that as a failure of prediction — that’s a policy success.”

The map shows median estimates of economic damage per year in 2080 to 2099 under a high-emissions scenario (RCP8.5). Damage is calculated as a percentage of county G.D.P., factoring in agriculture, mortality, crime, labor productivity, coastal impacts and energy demand. Counties with negative damage (green) are projected to see economic benefits. In the chart, the ranges labeled “likely” refer to outcomes with a two-thirds chance of occurring.

By BRAD PLUMER and NADJA POPOVICH