AS DROUGHT DEEPENS, AFRICAN NATIONS STRUGGLE TO GET GLOBE'S ATTENTION... 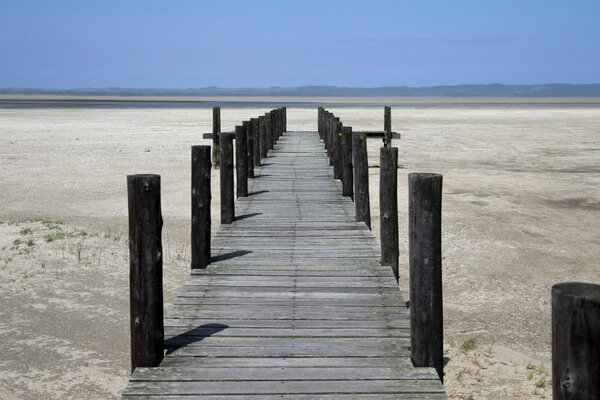 It's been at least three decades since southern and eastern Africa have seen this level of drought. In an ironic twist, the progress countries have made in responding to drought may be making it harder to get the outside help many need.

The sky above Ramoso Pholo’s fields is a glossy, postcard blue, drenching light over his neatly planted rows of corn, beans, and sunflowers. From a distance, it looks bucolic, but up close it is anything but.

For the past six months, Mr. Pholo has been waiting for clouds to blot this shimmering horizon and rains to soften his bone-dry fields. Instead, his neat rows of sunflowers have withered, and his corn stalks – normally as tall as he – are frozen waist-high.

“I have been farming my entire life and this is the worst season I have ever seen,” he says, cradling the head of a slumping sunflower. “About 99 percent of my crops are damaged – this year will be a total failure.”

The drought may be the worst Pholo has ever seen, but if forecasters are right, it may not be the worst he ever lives through. For climate scientists, the massive drought sweeping southern and eastern Africa since last year is an ominous signal of how climate change is driving extreme weather, threatening already vulnerable communities where climate and livelihood are closely intertwined.

The current dry weather, parched rivers, and crop failures here, the likes of which have not been seen in at least three decades, are linked to El Niño – a periodic warming of the Pacific Ocean – whose current iteration is one of the strongest ever recorded. El Niño is a natural phenomenon, occurring on average every three to five years and flip-flopping weather patterns in much of the world. But scientists say that rising greenhouse gas emissions are ratcheting up the incidence of super-charged El Niño years like this one. By the end of this century they’ll likely occur every 16 years instead of every 28 – and Africa, the world’s poorest and most ecologically fragile continent, will bear much of the brunt.

But in an ironic twist, that progress may be decreasing the global support that many nations still need – and demanded most recently at the COP21 conference in Paris from the developed countries they hold responsible for many of the damaging effects of climate change.

“There really are some climate justice issues involved,” says Bruce Campbell, director of research on climate change, agriculture, and food security with the Consultative Group for International Agricultural Research. “[Adaptation] is going to cost a large amount of money and it’s not really the fault of developing countries.”

Maize as an early alert

Across southern and eastern Africa, the drought drew attention first to the fragility of the agricultural economy – which employs a greater proportion of the population than farming does anywhere else on earth. In South Africa, for instance, the failure of commercial farms shifted the country from a grain exporter to a grain importer, inching the regional powerhouse ever closer to recession. And as farmers toppled, so did the economies built around them.

Pholo, for instance, typically employs 50 local people to help harvest his crops; this year he’ll be lucky if it is half that. He also leases his farmland from villagers, who in turn receive monthly bags of maize meal and an annual cash payment. In December, for the first time, he wasn’t able to pay out. And in this economically choked corner of the country’s rural northwest, such agreements are many people’s only buffer against destitution.

“I’m very worried because if it doesn’t rain there will be no food and no work,” says Tumelo Kgotle, a farmhand who supports seven dependents.

He says he knows the drought is severe in part because people have begun to eat yellow maize – a crop typically reserved for livestock and long a bellwether of food shortages here. In Malawi, Mozambique, and Zimbabwe, maize prices are up by more than 50 percent over last year.

To a large extent, the international community already knows what it needs to do to reduce the level of devastation to African agriculture in future extreme weather events, Mr. Campbell says. Countries and regions need to invest in better early warning systems, sturdier insurance for farmers, and more drought resistant crop varieties.

But while “there are many successes on the continent … they’re always just pieces of the full solution,” he says.

The effects have trailed out far beyond the continent’s farming communities. In Zimbabwe and Zambia, for instance, the dangerously low levels of the Kariba hydroelectric dam prompted massive electricity shortfall. (In October, Zambian President Edgar Lungu went so far as to call for a national day of prayer to arrest his currency’s precipitous backslide – triggered in part by the power scarcity.)

And in tiny Lesotho, one-third of whose population struggles with malnourishment and HIV, drought began compelling some of the hungry to stop vital medications that must be taken with food.

Then there is Ethiopia. The country has made massive strides in its own drought relief capabilities since a 1980s drought and famine that killed nearly a million people. But some 10 million Ethiopians still require “urgent humanitarian assistance” as a result of the current drought, according to the World Food Programme, and less than half of the $1.4 billion in needed international assistance has been funded to date.

But Ethiopia’s drought threatens the economy in far less obvious ways, according to Berouk Mesfin, a senior researcher with the Institute for Security Studies in Addis Ababa. For instance, it is straining rickety rural health systems and, as in Zimbabwe, sources of hydroelectric power.

“There could also be significant political implications,” he says. “The current government has staked its legacy … on attracting significant foreign investment.”

Drought relief may also become a pawn in national politics, says Ngonidzashe Munemo, a political scientist at Williams College in Massachusetts. In Zimbabwe, for instance, doling out food aid to supporters may be among the most effective tools President Robert Mugabe can leverage to hold onto power.

“That’s your most powerful resource in times of drought,” Mr. Munemo says. “Because it doesn’t have any standing drought relief programs, Zimbabwe is very open to political manipulation around aid distribution.”

Africa’s recent drought has generated relatively little global attention – for reasons that may not be entirely negative, according to Victor Chinyama, chief of communication at UNICEF Zimbabwe. In the 1980s and ‘90s, he points out, African droughts engendered a vast, paternalistic sympathy based on the assumption – not entirely incorrect – that the countries in crisis could not help themselves.

Now, he says, “so much has gone into building the capacities of our health systems that we rarely get to [extreme stages] of malnutrition. In a sense it is a positive story because the level of aid needed isn’t as great as 30 years ago.”

That increased resilience comes in many forms – from better drought monitoring to more highly functional aid distribution. But it can be a double-edged sword: UNICEF recently warned that only 15 percent of its requested $155 million for drought relief in southern Africa had been funded.

African countries attempting to green their economies have faced similar difficulties. Ethiopia, for instance, has laid out an ambitious plan to ramp up hydroelectricity, energy efficiency, reforestation, and sustainable agriculture. But it is struggling to find the $150 billion in outside investments it needs.

Back in South Africa, Pholo says he remains cautiously hopeful – for either government intervention or good rains, whichever comes first. “It will take me three years to recover, at least,” Pholo says, surveying one of the weed-choked fields he didn’t even bother to plant this year. “That's if the rains start tomorrow.”