AS THE SNOWPACK PILES UP, IS CALIFORNIA'S DROUGHT OVER? NO, SAY EXPERTS... 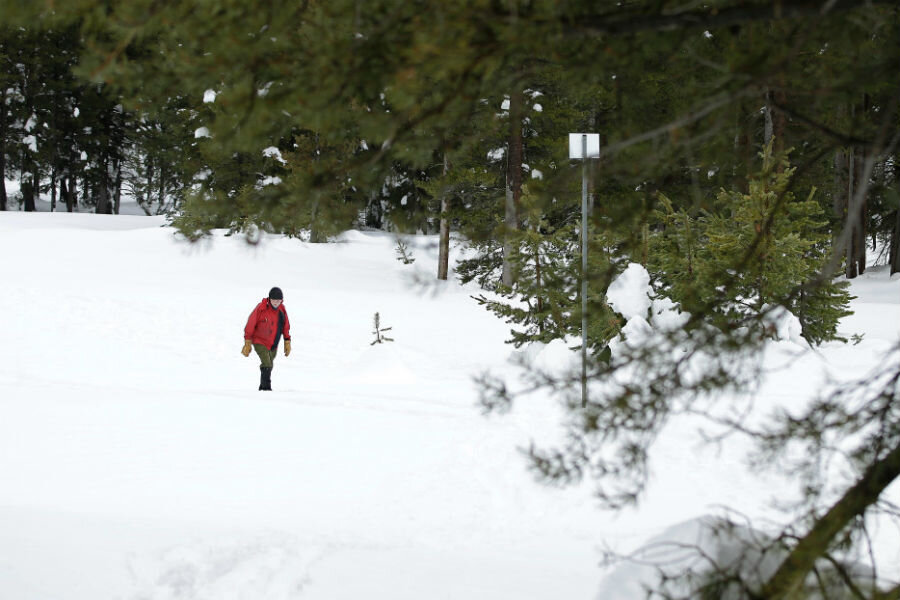 New measurements of the Sierra Nevada snowpack show California's snowiest winter in 20 years. But it may be too soon for sweeping policy changes...

Though heightened snowpack in California’s Sierra Nevada is cause for optimism, reducing water use remains as important as ever, scientists say.

On Thursday, the state’s snowpack in the mountain region reached 173 percent of average for that date. That’s the highest it’s been since 1995, thanks to a series of storms that bombarded California in January. Come spring, the snowpack will melt into 5.7 trillion gallons of water, enough for as much of a third of the state.

“It gives everything a much brighter outlook,” said Frank Gehrke, California’s snow survey chief, the Associated Press reported. Does the heavy rain- and snowfall signal a change in the way that California will approach its years-long drought?

As California Gov. Jerry Brown weighs ending the drought-related state of emergency this spring, farmers and city governments are calling for more water. But scientists caution that the drought is a long-term problem that won't be fixed by one season of heavy precipitation, and they advise officials to stay the course.

“Any aquifer recharge that occurs as a result of this winter's storms is just a small uptick in a century-long decline of groundwater storage, at least with respect to the once-vast reserves in the Central Valley," said James Famiglietti, a senior water scientist at NASA’s Jet Propulsion Laboratory, according to the LA Times.

But farmers and residents tired of the water restrictions point to the snowpack levels as proof that California has come full circle. In January 2014, Governor Brown stood at Phillips Station, a snowpack-measuring area in the Sierra Nevada to declare a state of emergency. On that day, there was no snow at all, a symbol of the intensity of the drought. Three years later, the snowpack at Phillips station is the equivalent of 28.1 inches of water, AP reported.

In April 2015, citing the state of emergency, Brown asked cities to reduce their water use to 75 percent of 2013 levels, and followed that up with reductions preventing farmers from taking surface water. Understandably, farmers and cities that have been affected by water-conservation efforts might like more water now that it seems to be plentiful again.

But while a study by the University of Colorado-Boulder and NASA’s Jet Propulsion Laboratory recently determined that the snowpack had filled more than a third of California’s “snow-water deficit,” the snow statistics are not a reason for a policy overhaul, scientists say.

Why? Because the high-piled snow is just a small part of the state’s overall water outlook, Jay Lund, director of the Center for Watershed Sciences at the University of California-Davis, told the LA Times. Most of the problem, he explained, lies with underground wells and basins.

"That's where the deficit is really concentrated,” Professor Lund said. “Every time [consumers] didn't have enough water, they pumped.”

And while the snow runoff will help address this water shortage, it can only fill underground basins that lie along its path from the mountains to the sea.

On top of that, the years of drought California has experienced means it may take time to restore normal conditions, as The Christian Science Monitor’s Jason Thomson explained on Thursday:

“When land is cracked and devoid of moisture, torrents of rain are not easily absorbed. Instead, they cascade across the surface, bringing floods and mudslides in their wake.”

If this is the first of several wet winters, then things are looking up. In view of the changing climate, however, conservationists suggest that this is the time to double down on water-reduction policies, in order to secure a sustainable future for the state.

In an announcement about California’s progress toward meeting water-conservation targets on Tuesday, state officials seemed to agree.

"We're at halftime," said State Water Resources Control Board chair Felicia Marcus. "We're not doing too badly, but we certainly haven't won the game yet."

Staff | @ellenrpowell
source: http://www.csmonitor.com/
original story HERE
New Climageddon book: Click here for Information on the new Climageddon book about the global warming emergency and what you can do.
Share Blog Post: If you would like to share this blog post on Facebook or in other ways go back to the original short version of this blog posting and look to lower right for the large green Share button.
Get Global Warming Blog RSS Feed: Sign up for free Global Warming Blog RSS feed by clicking here.
Sign Petition: Sign petition to declare an international global warming State of Emergency, click  here!
To see our: most current positions, opinions, comments, agreement or disagreement with this article, and/or possible criticisms related to the subjects or facts in the above article, click here.