AS THE WORLD BURNS, THE RICH CRUISE IN LUXURY THROUGH A MELTING ARCTIC... 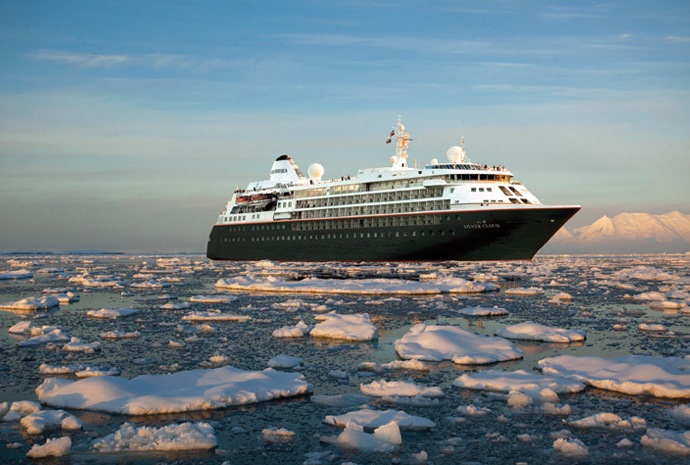 The Crystal Serenity has embarked on a 1000-mile voyage through the once un-navigable Northwest Passage...

As global temperatures soar, wildfires rage and sea ice levels dwindle to record lows, a luxury cruise company has found a way to make a pretty penny off our rapidly changing climate.

The Crystal Serenity set off from Seward, Alaska, Tuesday, on a 32-day voyage through the Northwest Passage. The sea route that connects the Pacific and Atlantic oceans was historically impassable, but global warming is transforming the Arctic and its ecosystem.

At 68,000 tons and capable of carrying 1,700 passengers and crew, it is by far the largest cruise ship to attempt the perilous voyage, National Geographic reports.

But these travelers won’t face the brutal, icy conditions Norwegian explorer Roald Amundsen experienced when he successfully led a 70-foot fishing boat through the passage 100 years ago. Instead, they’ll be soaking in hot tubs, dining in fancy restaurants, gambling in the ship’s casino and sleeping in lush suites as they cruise past polar bears, Inuit communities and vast, melting expanses of ice.

Climate Change as seen from around the world...

The cost of sailing in style through the environmental disaster unfolding near the North Pole is staggering: from $22,000 to $120,000 per person.

Accompanied by a large icebreaking escort boat and carrying two helicopters that will “allow for real time ice condition reconnaissance,” Crystal Serenity aims to make history with its nearly 900-plus mile journey to New York City.

A lot of work has gone into planning for the “epic voyage,” ship Captain Birger J. Vorland said in a message posted to Facebook on Tuesday.

“We have looked at every possible eventuality when it comes to safety, environment and the enjoyment of the guests,” he said. “We have crossed all the Ts and dotted all the Is.”

Given the current state of the planet, however, it should come as no surprise that the cruise has drawn fire from environmentalists worried, among other things, about impacts to marine life and the threat of an oil spill.

The cruise company has taken positive steps, but unsustainable tourism risks “ruining the very thing that tourists would come to see,” Rod Downie of the World Wildlife Fund said in a statement last week.

“The unique wildlife is already stressed by a warming climate and the loss of sea-ice, and the arrival of mega-cruise ships in this part of the world could push it further towards the edge,” Downie said. “It’s because the Arctic is in meltdown that this cruise can take place.”

The Los Angeles–based Crystal Cruises says it has introduced measures to safeguard the environment. “Of note is our intention to use ultra low-sulphur content marine gas oil, which far exceeds the current requirements in that region,” it said in a statement to The Guardian. “This, along with a relatively slow transit speed, will achieve our goal of minimising [sic] our carbon footprint.”

The company describes the cruise on its website as the “ultimate expedition for the true explorer.”

“Follow in the footsteps of intrepid explorers as you sail through unparalleled landscapes of grand glaciers, stunning fjords, and rare wildlife sightings as you learn the Arctic culture and its fascinating people,” it claims.

The Crystal Serenity headed north from Dutch Harbor on Friday and was scheduled to arrive in Nome by Sunday. As for whether this cruise sparks an entirely new tourism industry ― and what that might mean for the fragile arctic ― remains to be seen.