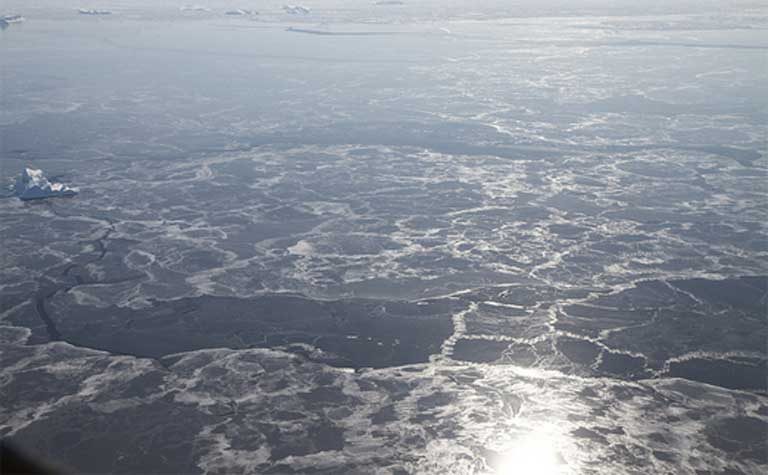 The sun reflects over thin sea ice and a few floating icebergs near the Denmark Strait off of eastern Greenland, as seen from NASA’s P-3B aircraft on April 14, 2012 — the record year for Arctic ice melt, so far. Photo by Jefferson Beck / NASA

Still, while 2017’s summer melt season didn’t break the record, it falls far below the 1981 to 2010 median extent by over 1.58 million square kilometers (610,000 square miles). Moreover, surface cover isn’t everything when it comes to the state of the Arctic — what experts say matters most is the total volume of ice — a combination of thickness and extent, and 2017 saw summer volumes among the lowest ever recorded.

Some scientists are now saying colloquially that the Arctic Ocean has in recent decades entered the “Thin Ice Age.” Since 1980, the average ice thickness come July has decreased by an estimated 120 centimeters (47 inches).

Notably this July, the average sea ice thickness in the Arctic was equivalent to the lowest on record.

So in spite of a slight rebound in summer extent, the average Arctic sea ice volume was still 47 percent below the 1979 to 2016 mean. That is not only likely bad news for the future of Arctic ice and polar ecosystems, but also for a stable global climate, which is highly influenced, and possibly unbalanced by events up North. Climatologists, for example, postulate that jet stream blocking, an effect hypothetically caused by a warming Arctic, could have stalled Hurricane Harvey over Houston.

This year’s thinner, slushier ice is more vulnerable than the past’s thick, multi-year ice, and it melts out rapidly during a spike in temperature or intense cyclonic activity. That’s why, even at the end of August, scientists at the National Snow and Ice Data Center weren’t quite ready to call how 2017 would shake out compared to previous summers. Last year, they noted, took a sudden nose dive around the same time.

“It was pretty unique going into the [2017] melt season, that we had had so many record low sea ice extents and thickness estimates all suggested we had quite thin ice and low ice volume,” says Julienne Stroeve, senior research scientist with the National Snow and Ice Data Center. “You would tend to think that maybe we’d have another record low, but what this summer has shown is that’s not enough to just have thin ice.”

Indeed, summer weather conditions have a larger impact on summer sea ice cover than the extent of the winter maximum going into the season. At least, that is the case, so far, with the ice record. 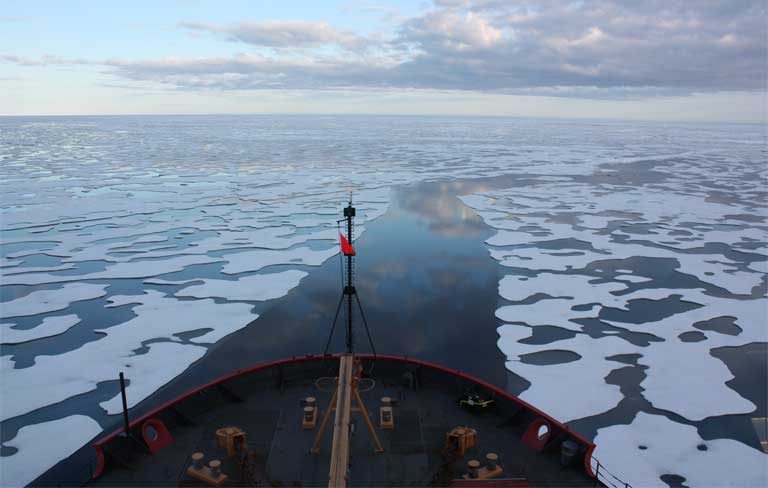 “Even if you have really thin ice at the start of the melt season, it’s still not quite thin enough where it wouldn’t matter what the summer weather patterns were,” continues Stroeve. “It’s not been a particularly warm summer in the Arctic; it’s been pretty stormy, lots of cold-core cyclones have come in, and that has helped to limit the ice melt.”

But atmospheric temperatures are not the only temps that matter. Sea surface temperatures were higher than normal in coastal regions, melting the ice from the sides and from below —reducing thickness through heat exchange and wave action.

While total sea ice volume is ultimately a more important climate indicator, circumpolar volume has not been observed as continuously as extent, which has been monitored daily via satellites since 1979. While scientists can cobble together scattered volume observational data points from Navy submarines, buoy moorings, field measurements, and satellites, these are limited in number in both space and time.

Rather, to determine reductions in volume over time, scientists have input what observations they have into varied numerical models which estimate sea ice volume over several decades. One of these modeling programs has estimated that sea ice volume declined by 4,291 cubic kilometers (1,029 cubic miles) between the end of the summers of 2003 and 2012. 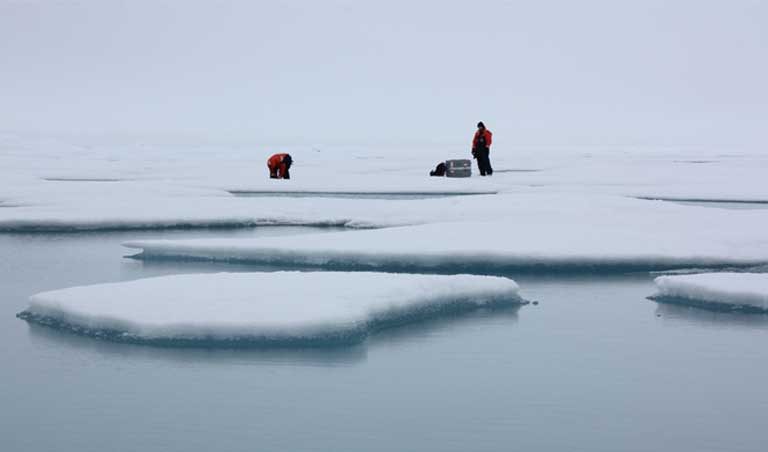 Scientists scout for a location to collect data on sea ice in the Chukchi Sea. Continued decline of Arctic ice, due to human-caused climate change, is hypothesized to be a factor in the destabilization of Earth’s weather patterns. Photo by Kathryn Hansen / NASA

Though sea ice extent was holding steady in mid-September, whether or not that will have any impact on this winter’s extent remains hard to say, says Stroeve. Because winters have been getting warmer and warmer, she expects there will still be delays in sea ice formation this autumn — especially in the Chukchi Sea, which melted out early in 2017.

The NOAA National Weather Service Climate Prediction Center states that due to extensive open water this summer, air temperatures over the Beaufort and Chukchi Seas and along the North Slope of Alaska will likely be far above average through autumn.

And while summer sea ice extent didn’t hit any record lows this year, it didn’t exactly bounce back either. “We [didn’t] have a record low, but [2017 is] still among the lowest we’ve recorded,” says Stroeve. According to NSIDC, 2017 came in at the eighth lowest extent since recordkeeping began in 1979. Also, no other 12-month period (September 2016 to August 2017) has had such persistently low sea ice extent.

“We’re not seeing any sort of recovery in the sea ice. Even if we have an average summer like this one — there was nothing remarkable in the air temperatures — but we still were among the lowest. I think that’s where thickness comes into play,” said Stroeve. “We’re not recovering to the conditions we saw in the 1980s or 1990s and that is because the thickness of the ice has gotten to the point where you’re not getting any recovery anymore.”

What seems fairly certain is that, so long as humanity continues piping greenhouse gases at a staggering rate into the atmosphere, Arctic ice volume will continue deteriorating, and the global climate will continue destabilizing. The Arctic, say researchers metaphorically, is increasingly skating on thin ice.

FEEDBACK: Use this form to send a message to the author of this post. If you want to post a public comment, you can do that at the bottom of the page. 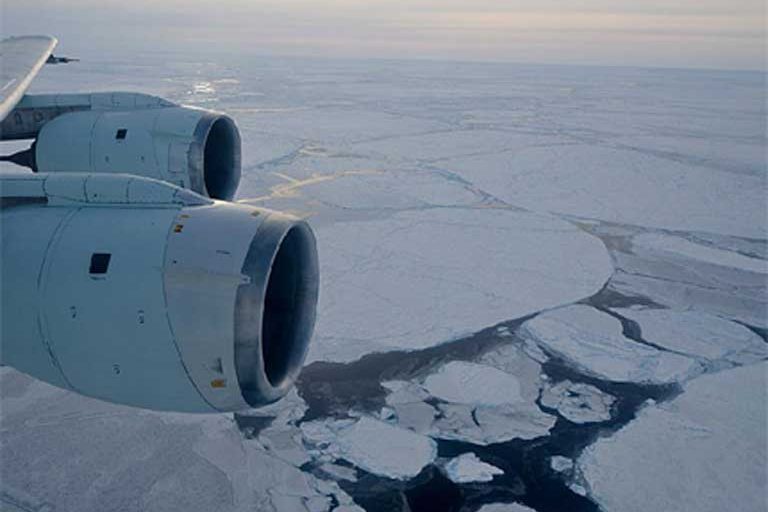 IceBridge Over the Weddell Sea. IceBridge, a six-year NASA program, is the largest airborne survey of Earth’s polar ice ever flown — yielding a three-dimensional yearly view of Arctic and Antarctic ice sheets, ice shelves and sea ice and giving researchers a better understanding of fluctations in polar ice volume and thickness. IceBridge is meant to serve as a continuity mission until NASA’s ICESat-2 launches in late 2018. ICESat-2 will monitor sea ice thickness from orbit, utilizing a new generation of space-based laser remote sensing instruments. Photo by Michael Studinger / NASA