AT THIS YEAR'S GLOBAL CLIMATE TALKS, PATIENCE BLENDS WITH URGENCY... 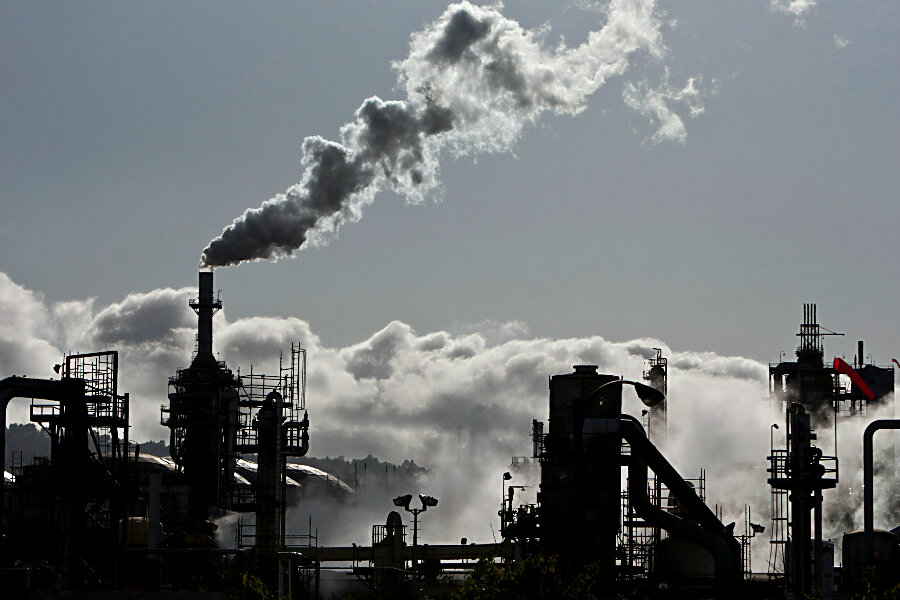 Smoke is released into the sky at a refinery in Wilmington, Calif., in this 2012 file photo. Many climate scientists urge nations to reduce carbon emissions at faster pace than has already been pledged. Bret Hartman/Reuters/File

Emission cuts that countries have pledged in Paris aren't expected to hit the goal of holding Earth's temperature rise to 2 degrees Celsius. This leaves a lot of work for a Morocco conference starting this week...

Marrakech, Morocco—The United Nations climate conference that opens here this week is all about finding the right balance between slow and fast.

At least that’s how many climate experts see it. They anticipate the conference will feature both a push for faster global action on emissions and an underlying practical reality: On some fronts, patience will be vital asset in building needed consensus.

The urgency, to participants including the US delegation, is obvious. An agreement reached at last year’s UN climate conference in Paris is now international law, with the goal of keeping global temperatures from rising 2 degrees Celsius above pre-industrial levels by century’s end. But to reach that goal, and avert some of the worst climate risks to humans and ecosystems, huge reductions in carbon dioxide emissions are needed.

Even with the pledges made in Paris, the world is heading toward a likely temperature rise of 2.9 to 3.4 degrees this century, the UN Environment Program said Thursday. Its report concluded that, although the Paris targets are pushing the world in the right direction, nations still must shave 25 percent of predicted emissions by 2030 to maintain the 2 degree goal.

“[A] big focus of the meeting [will be] specific policies that individual nations can adopt to reduce emissions quickly and more than pledged,” Paul Bledsoe, a climate official in former President Bill Clinton’s administration, says in an email. “Fast action is a key, since climate change impacts are mounting and feedback loops mean much warming is self-reinforcing and can lead to runaway impacts.”

The gathering of climate diplomats here comes just days after the Paris accord officially took effect, following ratification by a required quorum of nations: at least 55 countries representing at least 55 percent of global greenhouse-gas emissions.

The task in Marrakech is partly to start putting flesh on the bones of that agreement, including how to track carbon-reduction progress across nearly 200 participating nations. That’s where patience comes in.

“The negotiations will continue on a whole range of issues. The transparency and the accountability rules. The carbon market rules. How the ramping up and review of subsequent rounds of nationally determined contributions will happen. Are they going to get into a five-year cycle?” said Alden Meyer, director of strategy and policy with the Union of Concerned Scientists.

“Everyone assumes that is going to take a couple of years to do,” Meyer said. “2018 is probably when you will see a package of decisions.”

But this doesn’t mean creating the agreement’s architecture is behind or delayed, said Elliot Diringer, executive vice president with the Center for Climate and Energy Solutions. The Paris agreement last December set a 2018 deadline for implementing processes for transparency (monitoring and reviewing the progress individual countries are making) and finance accounting, two key facets of the deal.

“That’s an indication of the timeline parties had in mind in Paris,” Diringer said in an email, later adding, “So 2018 is shaping up as the next big political moment in the UNFCCC process.”

Bringing more nations on board

Still, the Paris agreement entered into force with remarkable speed, given its global scope. Why doesn’t the Marrakech meeting seek a faster track? A key factor is that many countries haven’t yet ratified the agreement.

So the early ratifiers will likely wait until more nations are officially on board to start establishing the nuts and bolts for the international climate regime. They want to avoid the agreement being “undermined by the feeling that countries don’t have a seat at the table,” said Paula Caballero, global director of the climate program with the World Resources Institute.

“There was an understanding initially that the entry into force would take a couple years,” Caballero said in a call with reporters. “This rapid entry into force obviously poses some challenges.”

So will there be any sort of document coming out of Marrakech?

“I don’t know yet,” John Pershing, the State Department’s lead climate negotiator, said at a recent event. But Mr. Pershing said he expects that, coming out of the first post-Paris rulemaking conference, some sort of bow will be wrapped around the experience.

“Will it be a political statement? I think it will be,” he said.

A deliberative pace on cementing the rules might actually be a good thing. It could help build greater consensus in an international process that relies more on diplomacy and good faith than hard, legally enforceable action.

Still, an uncertainty hanging over the conference’s opening is the US election, and notably the possibility of a Donald Trump presidency. The Republican nominee has said climate change is a hoax while threatening to pull the United States out of the Paris deal.

Despite the caveats, plenty of real bargaining will be going on here.

The US, for example, will lay out its mid-century plan for decarbonizing the economy, Pershing said. The idea is to prod more nations into ambitious action, though it’s unlikely that many others will reveal details about their 2050 policies.

Part of that exercise for the US dovetails with its role of leading efforts in Marrakech to get other countries on the same emissions-slashing timeline. The US tried to persuade others in Paris to set targets for 2025, but most countries thought that was too soon. Now the American goal is “to ensure countries that put out 2030 targets would be asked to review their progress and strengthen them,” says Meyer of the Union of Concerned Scientists.

The idea of setting any sort of deadline for creating rules, though, is rankling influential players like China and Brazil, Meyer adds. “It’s not exactly clear to me whether it’s a negotiating tactic…. There’s a lot of sensitivity in those countries to verification and review.”

Other hot topics in Marrakech are how to bolster monitoring and review capabilities in smaller developing nations. Announcements on sectoral initiatives, such as deforestation and renewable energy deployment, are expected. Ministers will explore country-specific actions to enhance emissions reductions in the near-term.

Climate finance will also be a point of contention, as in previous UN meetings. The Green Climate Fund for developing nations, which developed countries committed to in the 2009 talks in Copenhagen, will be at the center of those discussions.

“This fund is supposed to be supported at $100 billion of funding a year by 2020, but may not be on track for that level of funding,” Bledsoe says. “There are key questions about how this money will be used among the GCF's 24 member board.”

That picture is becoming a little clearer, as nations released a climate aid roadmap ahead of the conference. They’re on track to deliver $67 billion of publicly financed aid by 2020 and intend to leverage the rest through private means.

But there’s still some haziness about those dollar flows, said Mariana Panuncio-Feldman, the World Wildlife Fund’s senior director of international climate cooperation and the organization’s co-lead in Marrakech.

“How that support gets counted,” she said, “This needs to be further discussed “

This story was supported by a fellowship from the International Reporting Project.