AT VATICAN, ‘TENETS OF FAITH’ SEEN AS CRUCIAL IN CLIMATE CHANGE EFFORT... 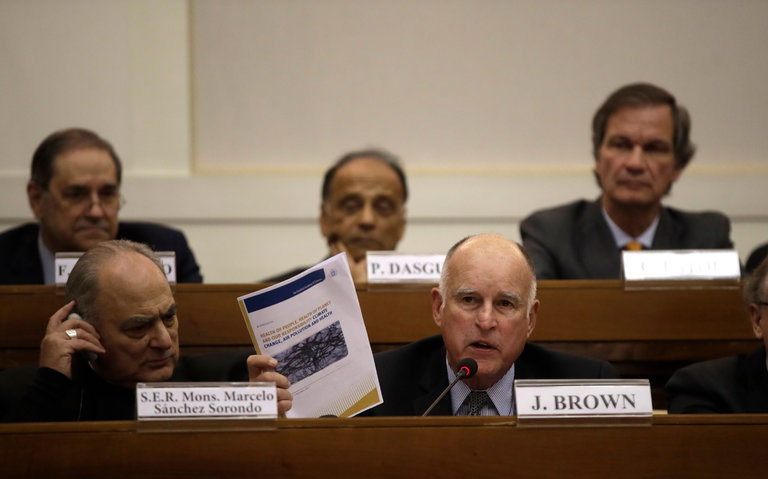 VATICAN CITY — Religious leaders need to tell congregations that global warming can affect not just the environment, but also the spread of diseases and other threats to human health, participants said at a Vatican conference on Saturday on climate change, an issue that has been a priority of Pope Francis...

Persuasion “starts with the tenets of faith” more than with scientific data, said the Rev. Leith Anderson, president of the United States-based National Association of Evangelicals, noting that most of the world’s population has some religious affiliation. “Environmental catastrophes” like recent storms, flooding and droughts, he said, “create opportunities to persuade.”

The Rev. Mitchell C. Hescox, president of the Evangelical Environmental Network, said he had given hundreds of talks on the issue. “Many evangelicals believe in climate change or understand the science in climate change, but they still see it as a future event,” he said. “It’s not something they have to worry about, and that is what we have to change.”

Mr. Hescox added: “The way to move conservatives around the world is to talk about how it impacts or affects their children, their own lives.”

The three-day conference on public health and the planet, which ended Saturday, was hosted by the Pontifical Academy of Sciences. The conference reviewed studies and data that have emerged since Francis issued a forceful 2015 encyclical that highlighted the social and ethical issues caused by climate change, including mass migration and famine.

The participants shared “the most recent solid science on how climate change and air pollution undermines health, increases chronic diseases and the early results on how it impacts the brain,” said Joachim von Braun, the president of the Pontifical Academy. “Science is not just pointing at the environmental consequences of climate change, but also human health consequences” that affect both the poor and the wealthy.

Jerry Brown, the governor of California, who also spoke at the conference, underlined the importance of religious leaders’ involvement. “Until religious leaders from every part of the world and every denomination are engaged, we will not be able to move aside the huge rock of indifference, complacency and inertia,” he said.

“The American people in the majority are very much in support of serious climate action,” said Mr. Brown, who will head to the United Nations’ climate change conference this coming week in Bonn, Germany.

While governments have responsibility to enact change, he said, individuals also have an obligation. Unless people reorient their habits and way of life, he said, it will be difficult to reverse the changes affecting the planet.