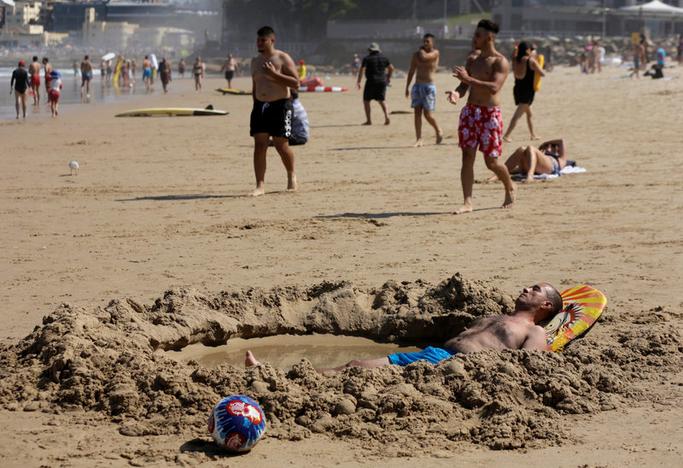 A man lays in a pool of sea water he dug into Sydney's North Cronulla Beach as Sydneysiders take refuge from sweltering conditions during a heatwave along Australia's east coast, February 11, 2017. REUTERS/Jason Reed
Australian emergency services were bracing against "potentially catastrophic" fire conditions on Saturday, as firefighters battled nearly 50 blazes in the state of New South Wales, sweltering in a heat wave sweeping the country's east coast...

Weather officials fear temperatures could hit 48 degrees C (118.4 F) in some areas, setting a record for the state's hottest February day ever. People have been banned from setting fires, and some major sports events have been canceled.

"It's not just another summer's day. This is as bad as it gets," Shane Fitzimmons, rural fire chief in the state, which was already battling 49 bush or grass fires by mid-afternoon, told reporters.

"The catastrophic ratings are what we could describe as beyond the conventional scale."

Thousands of people flocked to Sydney’s beaches to cool off, prompting warnings from lifeguards to stay close to shore and take precautions against the sun.

"We want people to be aware of signs of heat stress," a spokesman for the state's lifeguard service told Reuters. "The number one message for people is to stay hydrated, it’s crucial on a day like today."

The extreme heat roiling out of Australia’s desert interior will also push temperatures in the northeastern state of Queensland and the Australian Capital Territory (ACT), home to the capital, Canberra, to uncomfortable levels on the weekend.

Temperatures hit 47 C (117 F) in parts of New South Wales and ACT on Friday, putting pressure on the electricity grid and prompting plans by authorities to suspend supply in some areas.

Late on Friday, the Australian Energy Market Operator said the prospect of blackouts had been averted as the state cut back consumption.

But with similar grueling weather expected over the weekend, residents cannot relax vigilance on power use, a spokeswoman for the body said on Saturday.

Racing officials in Sydney, Australia's largest city, postponed the Royal Randwick Race Meeting over fears for the animals' wellbeing in the heat.

A weather change on Sunday may offer a breather, said Peter Zmijewski, a senior forecaster at the Bureau of Meteorology.

"For quite a few weeks, nights have been coming warmer and we haven’t had any changes to blow the heat away," Zmijewski told Reuters. "We may break this pattern tomorrow and Monday.”