AUSTRALIA COULD SUFFER FROM DROUGHTS AND HEATWAVES AS THE TROPICAL ZONE EXPANDS... THE Earth’s waistline is bulging and the tropical atmosphere is expanding towards Australia, which could have disastrous consequences...

As the tropical climate creeps out further, it will cause Australia to become hotter and perhaps fall into serious drought with the country suffering from a lack of rain.

The tropical zone between the Tropic of Cancer and Tropic of Capricorn has been expanding about 85km over a decade, which over 100 years is about the distance between Sydney and Brisbane.

If the rapid growth of the tropical zone continues, by 2100 the new dry subtropical zone would extend from Sydney to Perth.

As the dry subtropical zone moves towards Australia, the country will suffer from severe droughts and less rain will fall in warm regions.

CQ University Environmental Geography Adjunct Professor Steve Turton told news.com.au in Perth water storage was already a problem due to a decrease in the amount of rainfall and there was a drying trend across Australia, particularly in the south west.

“South west to Western Australia has dried significantly since the late 1970s,” he said.

“This means places like Perth, their storage of water is becoming an issue for them.”

Professor Turton said Tasmania was likely the only place in Australia that would be protected from the new dry subtropical zone, with rainfall in the state consistent. 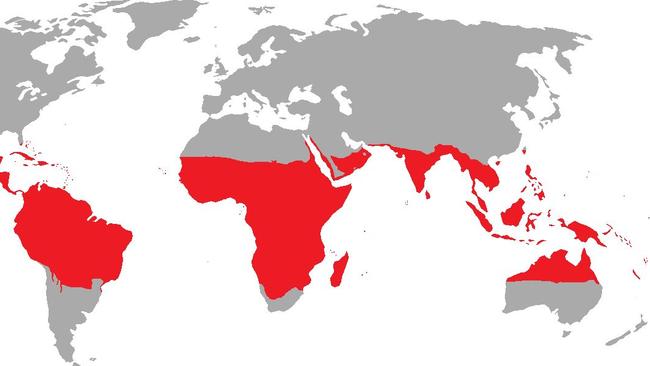 The earth's current tropical zone, which is expanding north and south.Source:Supplied

‘WHO’S GOING TO LIVE THERE?’

Professor Turton said the CSIRO and Bureau of Meteorology expected more hot days with the expansion of the tropics.

“There’ll be more trapping of heat and gas in the atmosphere,” he said.

“A hot day is defined as over 35C because the human body starts getting stretched when the air temperature gets over that.

“In Darwin, it on average has the highest number of hot days. There are about 47 days over 35C each year on average.

“If we continue with business as usual, by 2090 Darwin could experience nearly 320 days a year above 35C.

“And Darwin is on the coast — in places like Katherine it would probably be every day of the year. How do you manage to live there?

“Obviously all our cities will have more hot days and Darwin is an extreme case if we don’t bring emissions down.”

Professor Turton said Darwin’s string of hot days would be a worst-case scenario, but likely if the world did not work to lower greenhouse emissions and black carbon.

He said if countries stuck by their commitment to the Paris agreement — a plan to stop the global average temperatures from rising 2C by the end of the century — the effects of the expanding tropical zone wouldn’t be felt as hard.

But Professor Turton said the global temperature had already risen 1C since the pre-industrial revolution, leaving just 1C to play with. 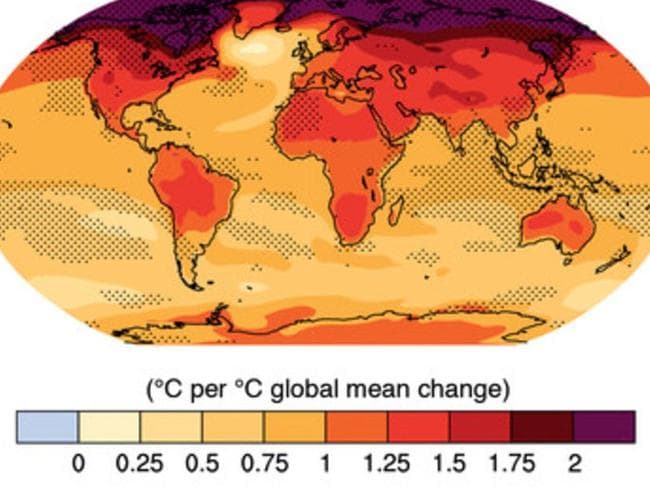 Map shows how the world will warm with the expansion of the tropical zone.Source:Supplied

The effects of the growing tropical zone could also create problems for northern parts of Australia.

There are plans to further develop Australia’s north because the population is mainly in Cairns and Townsville, but this plan may not work due to the moving tropical zone.

“There is a big focus on developing Northern Australia for agriculture, tourism and obviously mining is a big industry,” Professor Turton said.

“The one thing I caution is climate change is going to be a problem for developing the north, mainly because of the heat. It will be the biggest issue, it’s already becoming a problem.”

“Phoenix has the population of Sydney. Can you imagine Sydney airport or other places inland not being able to run the economy because it’s too hot? These are big issues for the northern and southern parts of Australia.” 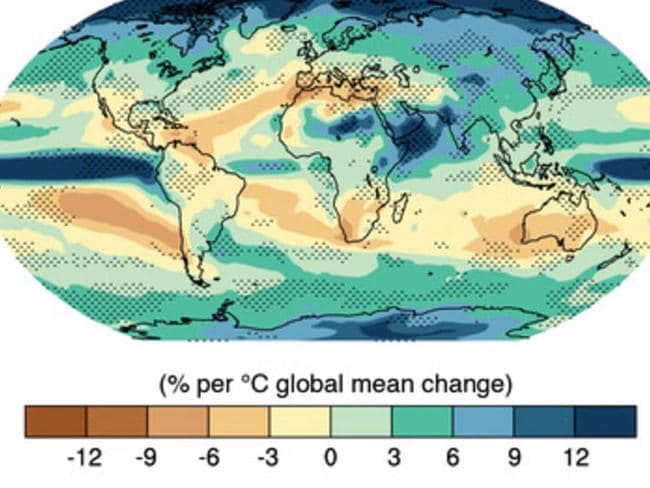 Map shows how the world will suffer from less rainfall with the expansion of the tropical zone.Source:Supplied

RISE IN HEATWAVES AND DROUGHT

“Sydney and Melbourne will have more hot days and hot spells,” he said.

Heatwaves with days above 40C will become more common and Professor Turton said the cities could even have heatwaves that lasted for two weeks.

“Old people will be particularly vulnerable and people in the south where they aren’t used to the heat as much,” he said.

The heatwaves and lack of rainfall won’t just impact humans, but Australia’s entire ecosystem. Professor Turton said animals would die out, farmer’s crops would struggle to handle the heat and Australia’s multi-million dollar wine industry could be destroyed.

“The wine industry is very vulnerable and can handle a few hot days, but an extended period of hot days would literally cook the grapes,” he said.

“It’s an industry we can’t afford to lose.”

Professor Turton said animals migrated when temperatures and weather conditions put them under pressure, but Australia was fast running out of land for animals to move to.

He said Australia needed to implement climate adaptation strategies immediately to control the effects of the earth’s bursting waistline.

Video: 1/06/2017 Australian Deputy Prime Minister Barnaby Joyce says to speculate on what President Trump might do is 'insanity' and he's going to watch his Twitter to see what happens next.