BAD NEWS FOR CLIMATE CONTRARIANS – 'THE BEST DATA WE HAVE' JUST GOT HOTTER... 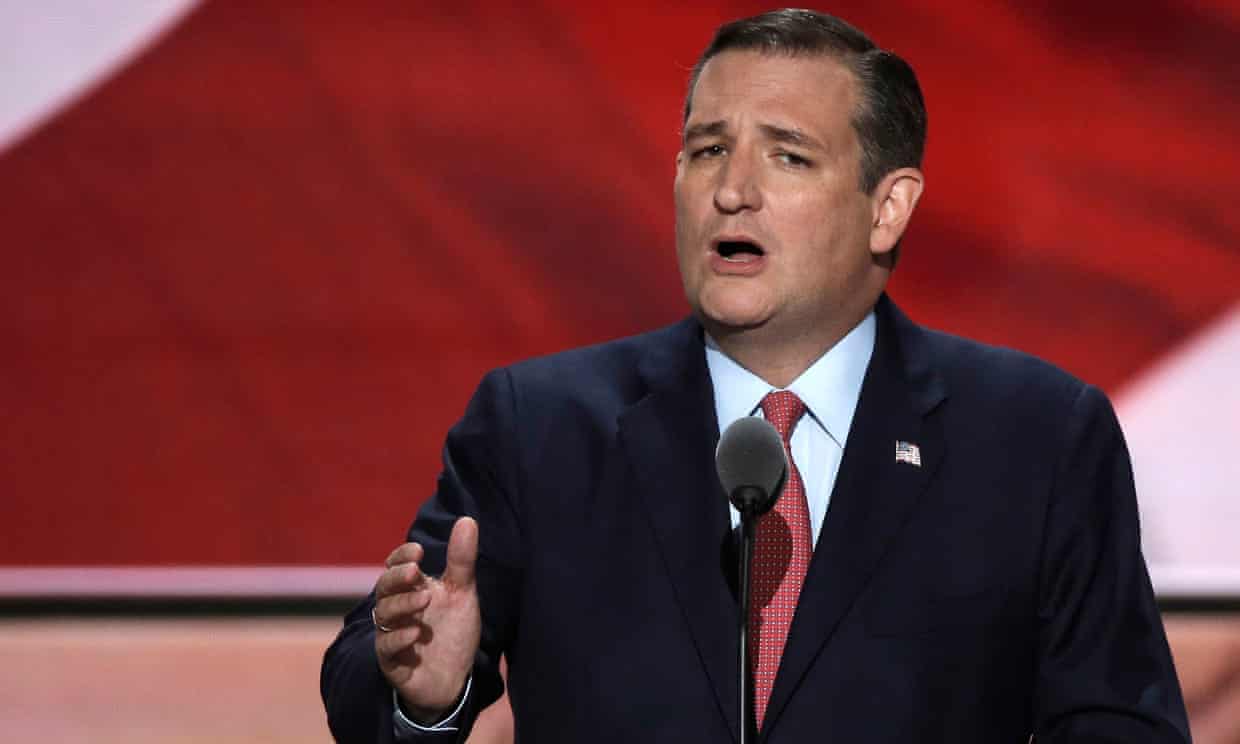 The favorite satellite data of contrarians like Ted Cruz corrected for some errors and ended up hotter...

A new paper just published in the Journal of Climate is a stunning setback for the darling of cherry-picking for contrarian scientists and elected officials. Let’s walk though this so we appreciate the impact.

The vast majority of scientists know that the climate is changing, humans are the main reason, and there are going to be severe consequences. We have decades of measurements that prove our understanding of this process. There is simply no debate or dispute.

Despite this, there are a shrinking number of contrarian scientists, elected officials, and industry representatives that have spent endless time trying to downplay the impact. They have variously argued that the climate isn’t changing, that the changes won’t be very much, or that there are no viable solutions to the problem. Much of their position relies upon finding evidence that the current observations of warming are not great. That is, the Earth is not warming as fast as predictions.

To support this incorrect (and intellectually dishonest) position, contrarians have scoured the data for any evidence at all that suggests the Earth is not warming. They have skipped oceans (which account for 93% of the warming). They skip the Earth’s surface temperature, ignore ice loss, ignore sea level rise, and in fact ignore everything except some select regions of the atmosphere. Their fallback position is that since a part of the atmosphere seems not to be warming very fast, this means the Earth isn’t warming or that climate models cannot be trusted. I know I know, this sounds dumb, and it is. But it is their current argument.

But let’s pretend we are contrarians and let’s ignore the entirety of the Earth system except for this very small part. Do they have a point? There has been a lot of dispute about exactly how fast these atmospheric temperatures have been rising. Measurements are best made by weather balloons or by satellites. The satellites are convenient because they orbit the Earth quickly and can gather lots of information that is quite uniform across the globe. But satellites have their problems.

First, they are not stable. They drift in altitude and their orbits drift horizontally. As a consequence, satellite users have to correct their data to make sure these drifts don’t give a false impression of heating or cooling. The satellites also have other issues. For instance, they have to be calibrated and they have to be stable in time. You want to ensure the temperature sensors don’t change during the satellite’s lifetime. You want to make sure that you know the location where the measurements are taken.

In short, you have to be really careful about satellite measurements, there is a lot of uncertainty. Despite this, contrarians have tried to tell us that satellites are better than thermometers, better than models, better than anything at measuring climate change.

Contrarians claiming satellite data are ‘the best data we have.’ Video by Peter Sinclair for Yale Climate Connections.

One of the groups that has promoted satellite measurements, and downplayed climate change is from the University of Alabama at Huntsville (UAH). In the past, they have falsely claimed that the atmosphere was cooling (it wasn’t, they had made a mistake). Over the years, people have found multiple errors in their work and data, and it seems every time an error was discovered, the satellites we revised warmer and in better agreement with thermometers and climate models. To counter the UAH group, another institution began processing satellite data (Remote Sensing Systems, RSS). The RSS group has been very helpful over the years finding and correcting errors in the UAH data.

RSS was responsible for this new publication. In updating their analysis, they find that prior to about 2000, the old and new analysis were very close to each other. However after that, the improved analysis shows a much more rapid warming. Just in the time period for the so-called “hiatus” – the temporary slowdown in surface and lower atmospheric warming that’s now ended. Compare the red (new) analysis to the grey (old) in the image below. 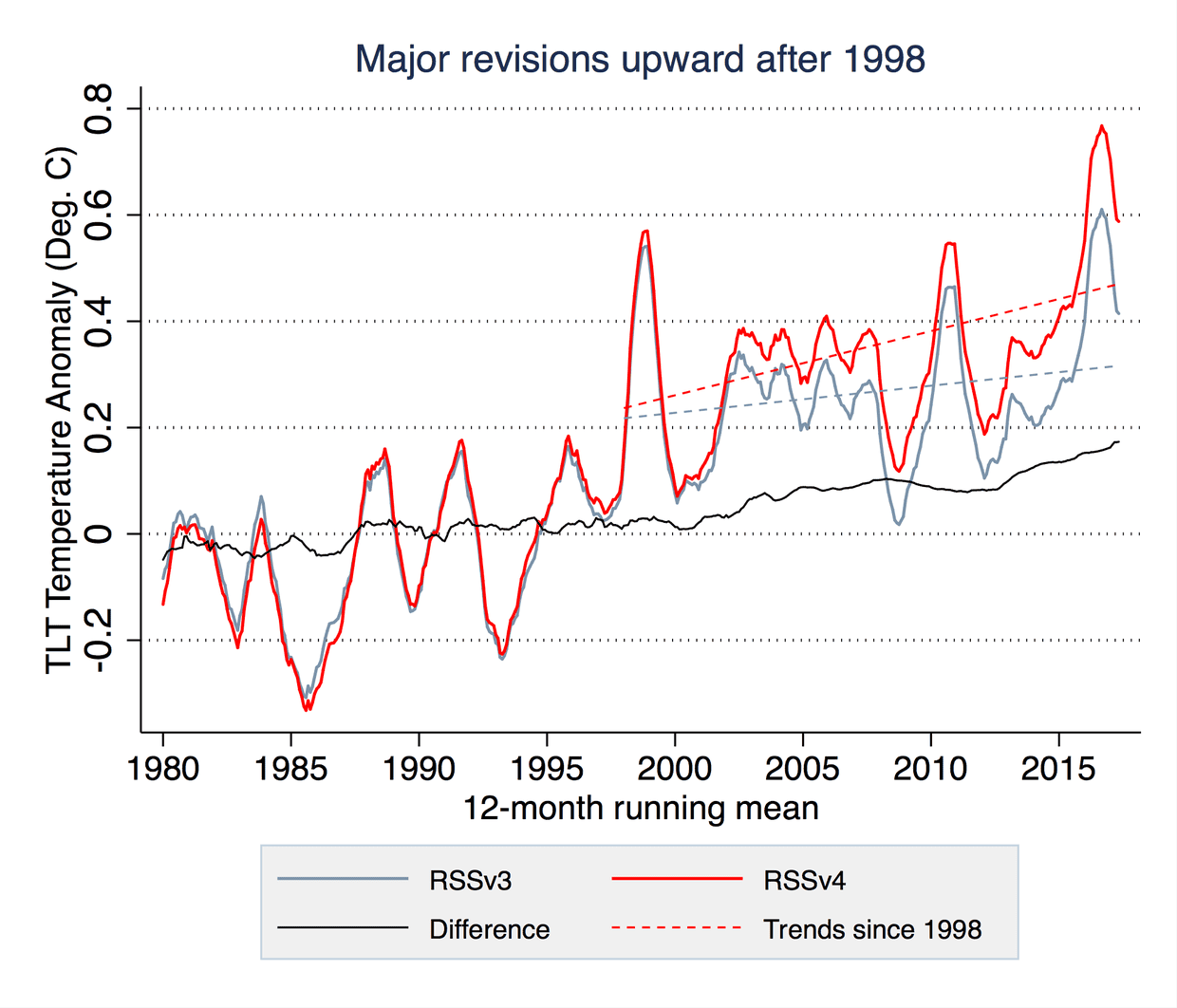 Not only that, but the improved analysis shows that the atmospheric (lower troposphere) temperatures are warming faster than the Earth’s surface. 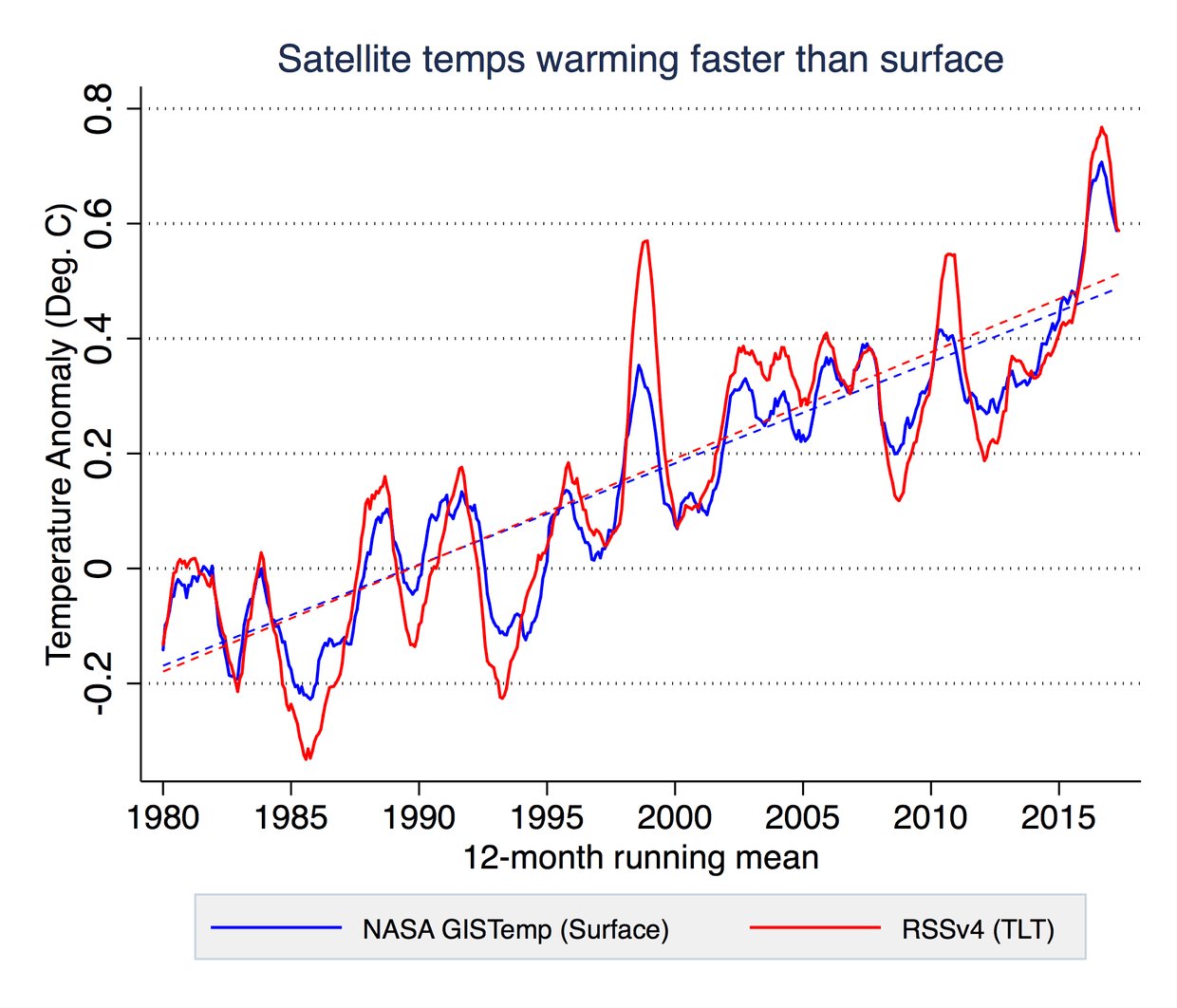 This means that the results from satellites are now in-line with all the other signals from the climate. This is an incredibly consistent pattern.

But what about those contrarians? Are there other data that contradict the current results? Yes, as seen in the third image, below. The image shows that the RSS and UAH data agree pretty well until around 2000. After that, the UAH data nearly flatlines but the RSS data continues warming. 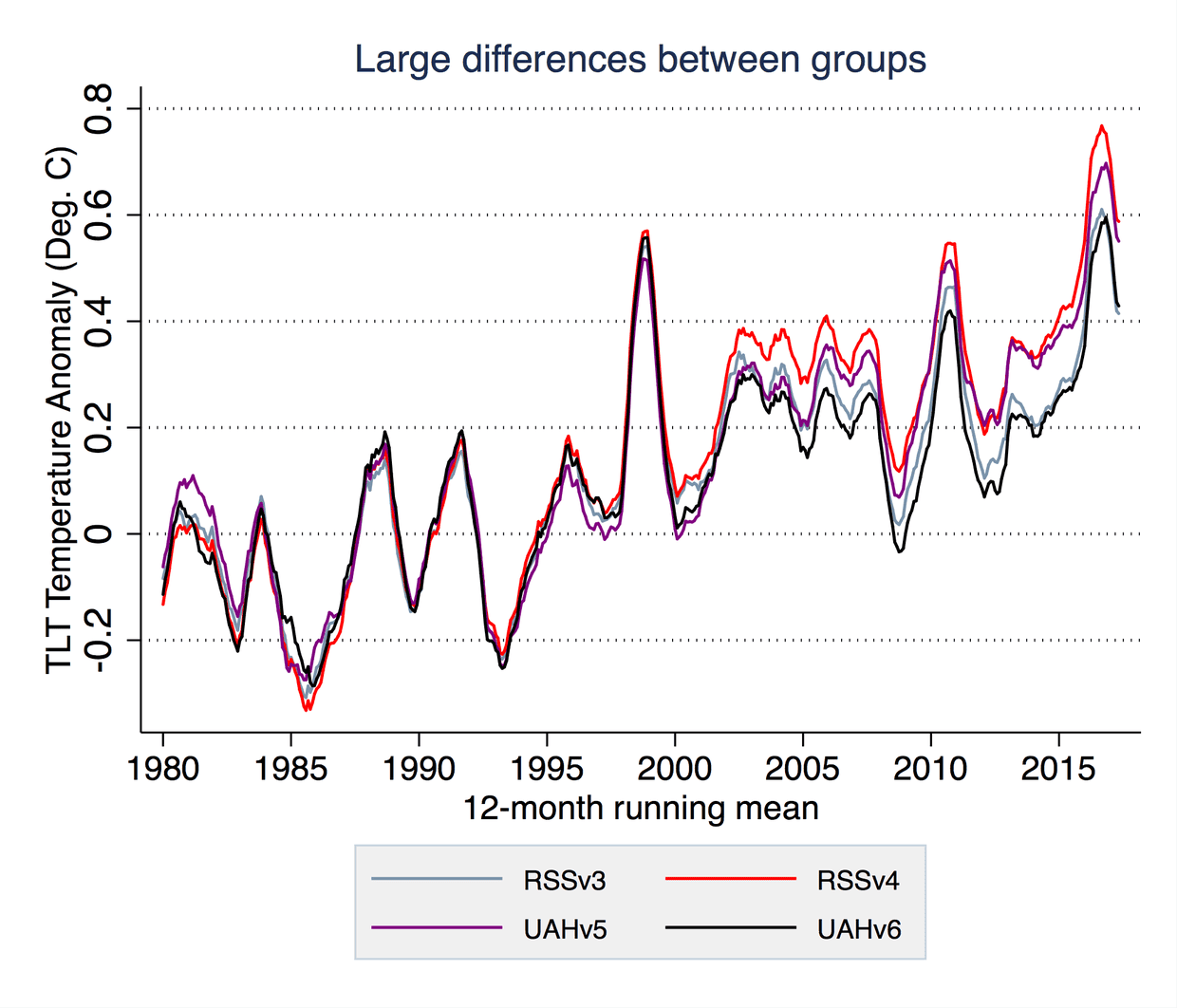 So what are the corrections made by the RSS team? As I mentioned earlier, the orbits of the satellites change over time which means that locations where measurements are made at a given time of the day change (it drifts). To account for these changes, RSS used a combination of satellite comparisons, climate models, and something called climate reanalysis to estimate changes in the temperature with time. They included measurements from other instruments as a check, such as weather balloons. RSS also identified bad data – when multiple measurements were made and one of the measurements disagreed substantially with the others, it was suspect. They also caught a calibration error that lead to changes in warming rate.

For those who only follow climate science on the periphery, they may have heard phrases like “global warming stopped 15 years ago,” “climate models got it wrong,” “we don’t really know if it is warming,” etc. There is now no reason whatsoever to believe these claims. We who work in the field knew these assertions were baseless, but now hopefully the people making them will retract.

This study also shows how science works. Science is a cut-throat occupation. As a group, scientists love to collaborate, to share ideas, to work together – all with a goal of understanding the world a little better. But, we are also very critical of each other (and critical of ourselves). We challenge each other, sometimes privately and sometimes openly. I firmly believe this culture is important. It is essential that the best ideas survive. It is critical that the best science wins out in the end. One way the best science can win is when science is competitive. The funding and publications should be based on your skill and your history of being right. Science funding should be cut-throat so bad science is not continually funded. Funding should be cut-throat so money isn’t wasted. Funding should be “survival of the fittest.”

This idea is important because there is a move to break this strategy. In the USA, there is a growing effort to fund scientists not on their skill but rather on their politics. Sort of ‘give some money to mainstream scientists and equal money to contrarian scientists.’ While I have no argument with contrarians getting money for research, I object for scientists to get money for bad science. I object to favoritism and politicization.

Scientists should get rewarded based on good work that survives scrutiny. They should not be rewarded for being a Republican or a Democrat. This growing movement of favoritism should disgust any real scientist. It should infuriate taxpayers (whose money will be wasted). It means that scientists don’t have to be good to be supported, they just have to have their “team” in the White House. How shameful. More on this in a future post.