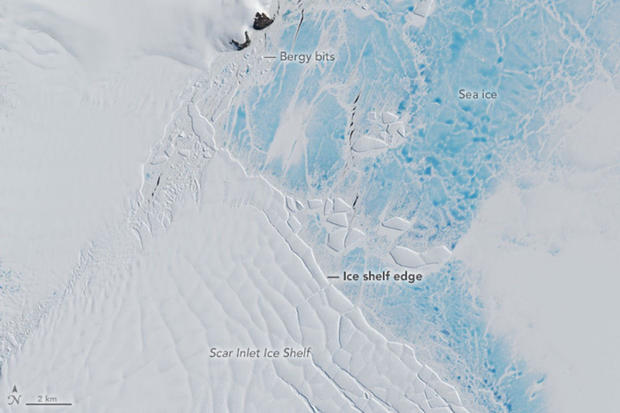 An expansive new image shows the changes in Antarctica’s Larsen Ice Shelf since the mid-1980s...

The story is one of retreat, and the ice continues to crumble. A growing crack in a portion of the ice shelf called Larsen C is poised to free an iceberg the size of Delaware from the continent.

Larson C isn’t visible in the new satellite image, which focuses on two more northerly portions of the sheet, Larsen A and Larsen B. Ice shelves are floating mattresses of ice that form from the outflow of the glaciers that creep slowly across the Antarctic continent. The Larsen Ice Shelf is on the northeast coast of the Antarctic Peninsula along the Weddell Sea. It was named for the Norwegian explorer Carl Anton Larsen, who explored parts of it in 1893 by ship and ski. [Images of Melt: Earth’s Vanishing Ice]

Since 1995, the Larsen Ice Shelf has lost 75 percent of its mass, according to the National Snow and Ice Data Center (NSIDC). In 1995, a 579-square-mile (1,500 square kilometers) chunk of Larsen A broke off from the ice shelf, according to NASA’s Earth Observatory. In 2002, an even larger portion of Larsen B — 1,255 square miles (3,250 square km) crumbled away. While calving events are normal, collapses of this magnitude have only been seen in the last 30 years, according to the NSIDC. 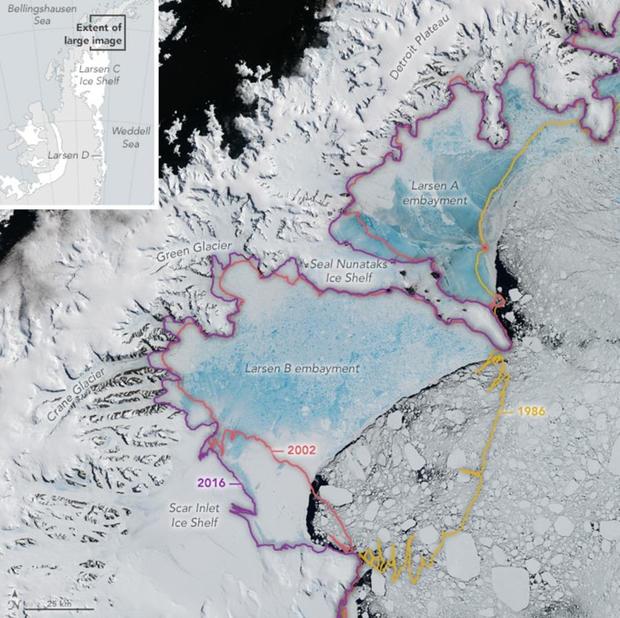 The collapse of floating ice doesn’t raise sea levels, but a 2004 study by NSIDC researchers found that in the wake of Larsen B’s 2002 collapse, the land-based glaciers that feed the ice sheet have accelerated their flow toward the sea. This speedy flow of ice does have the ability to raise sea levels.

“You can think of the Larsen or really any ice shelf like it is a cork in the neck of a champagne bottle lying on its side,” Christopher Shuman, a researcher who has studied these ice sheets at NASA’s Goddard Space Flight Center, told the Earth Observatory. “Once you pop that cork, the wine inside — all that glacial ice sitting on land — will start flowing out.”

The newly released image is a combination of four images that were taken by the Operational Land Imager on the Landsat 8 satellite on Jan. 6 and Jan. 8, according to the Earth Observatory. An overlay shows the former extent of the ice shelf in 1986, 2002 and 2016.

The ice sheets are not only retreating, but also thinning, as a 2016 study in the journal Annals of Glaciology by Shuman and his colleagues found. The ice shelf is losing thickness at a rate of between 6.2 feet and 8.9 feet (1.9 and 2.7 meters) each year, with the fastest losses occurring on the eastern side of the shelf, the researchers reported. Scientists expect the remnants of the Larsen B Ice Shelf to vanish entirely as early as 2020, marking the end of an ice mass that previously persisted for 12,000 years.

Sign Up for Free Global Warming Blog  RSS feed by clicking here
To View Our: current positions, opinions, agreement or disagreement with this blog article or its facts, click here