BIG OIL, MAKE WAY FOR BIG SOLAR. THE WINNERS AND LOSERS IN PARIS...

Saving the world isn’t going to be cheap. If you sell oil, coal or old-fashioned cars, that threatens disaster. For makers of stuff like solar panels, high-tech home insulation, and efficient lighting, it’s a potential miracle...

That’s the bottom line from this weekend’s climate deal in Paris, which commits 195 countries to reducing pollution in order to head off dangerous climate change.

Global governments and companies are counting the costs and benefits from the agreement, which calls for wholesale transformations of energy, transportation, and dozens of other lines of business. Fossil-fuel producers and countries that depend on them face massive, costly disruption. Players in up-and-coming industries like renewable power and energy efficiency are looking at an unprecedented opportunity.

“As a major oil and gas company, we are clearly at stake in these discussions," Patrick Pouyanne, the chief executive officer of French oil giant Total SA, said in Paris. But "an optimist sees in every difficulty an opportunity. I’m definitely an optimist; I have to be."

The Paris pact, which also calls for a review of ever-tightening pledges every five years, is the most significant global climate agreement ever, outstripping the 1997 Kyoto Accord in its scope and ambition. Along with Barack Obama, Vladimir Putin, Xi Jinping and dozens of other top political leaders, the summit that produced it attracted hundreds of large companies eager to influence or understand negotiations that could deeply affect their future business models. 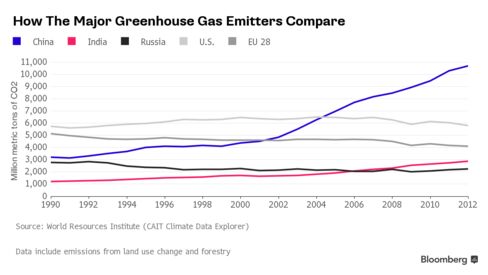 The deal will likely accelerate investments in technologies like renewable energy and electric vehicles -- especially if more countries join the European Union and parts of North America in imposing a price or tax on carbon. The United Nations estimates upward of $1 trillion a year in spending is required to de-carbonize the global economy and prevent temperature rises scientists say could flood coastal cities, disrupt agriculture, and destroy ecosystems.

That means companies with business models threatened by a low-carbon world need to re-focus, and fast, said Lyndon Rive, CEO of SolarCity Corp., a U.S. provider of home-solar systems chaired by billionaire Elon Musk. For people who sell oil, Rive said on the sidelines of the Paris summit, "you’re going to defend that job because that’s your livelihood. But your livelihood is going to be destroyed."

Executives from more traditional companies have a similar, if less stark, view. Peter Terium, CEO of German utility RWE AG, said companies like his would have to learn from the successive transformations of International Business Machines Corp. to stay relevant in a new energy system. RWE on Friday approved a plan to split into two companies, one focused on renewables and grids and the other managing declining conventional assets.

That doesn’t mean Big Oil will be closing up shop anytime soon. According to a relatively optimistic forecast of emissions cuts by the International Energy Agency, fossil fuels will still account for about 75 percent of energy demand in 2030, with coal hitting a plateau, oil growing slightly and natural gas surging. 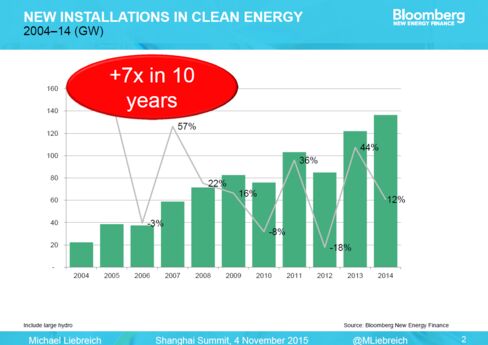 To stay ahead of climate policies, energy majors are placing their heaviest bets on gas. While solar is advancing quickly in terms of cost and efficiency, the industry hasn’t yet figured out how to stockpile sufficient power for times that the sun isn’t shining. Until that problem is solved -- likely with major improvements in batteries -- there will be significant demand for coal, gas, or nuclear power.

"Gas is one of the most compelling opportunities in the short to medium term," Helge Lund, the CEO of British gas producer BG Group Plc, said in Paris. A world totally without fossil fuels is "beyond the meaningful planning horizon," leaving companies like his plenty of time to keep drilling, he said.

Energy investment, though, will increasingly shift toward green power. Under another IEA scenario, renewables will attract about 59 percent of capital in the power sector over the next decade, rising to about two-thirds from 2026 to 2040. France’s Total, for example, is building out its solar business, shifting investment to gas, and expanding energy-efficiency services to cope.

Coal companies will be especially hard-hit. The Stowe Global Coal Index, which tracks the stock performance of 26 major producers, has lost 59 percent of its value this year. It’s the start of a shift of "many trillions of dollars toward low-carbon technologies and away from old fossil-fuel technologies," Mindy Lubber, CEO of Ceres, an organization that works with investors to push companies for better environmental performance, said in an e-mail.

While environmentalists and many politicians argue the overall transformation will be positive for economies and jobs, millions of workers will face severe consequences. In the Canadian province of Alberta, the heart of the country’s oil patch, a newly-elected left-of-center government last month raised carbon taxes sharply. The idea, Environment Minister Shannon Phillips said, is to use the proceeds to help "make those investments in clean tech, in efficiency, in the renewables space," and diversify the economy away from fossil fuels.

"Any transition has obviously not got everybody benefiting in equal amounts," creating a need for programs like job re-training, U.S. Energy Secretary Ernest Moniz said in Paris. "I’m not going to sugarcoat it."

Executives at companies that have moved early to get themselves ready for a lower-carbon world argue there’s nothing new about the energy transition except perhaps its scale; after all, changing technologies have been obliterating business models since at least the invention of the wheel.

"Really high-carbon industries have had their day," said Steve Howard, Chief Sustainability Officer at furniture retailer Ikea. "If they can adapt and reinvent themselves, fantastic! If they can’t, maybe some will just return cash to shareholders and slowly close up shop."

195 Countries Sign Historic Climate Deal in Paris
Watch video HERE.
To receive the latest breaking news on global warming issues, click here and go to our climate blog. Look to the bottom right of the page for the climate blog Subscribe box to automatically get our RSS news feed and each new story.
To learn what you can do that is effective to help fix global warming caused climate destabilization, click here.
To learn why the term climate destabilization is replacing the terms climate change and global warming, click here.