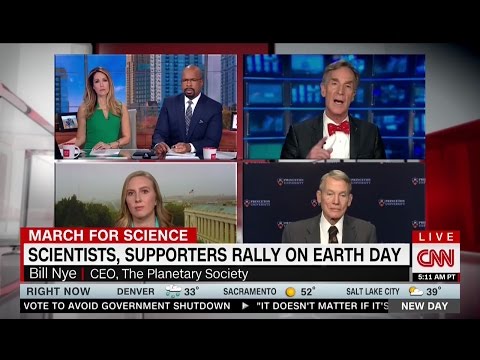 People who mislead the public on climate change should not be on the news. Period!

Yet, on Earth Day, CNN's New Day Saturday program featured William Happer, a well-known climate denier who used his time on CNN to state that carbon dioxide isn't a pollutant, but is actually beneficial to the planet and claimed that the Paris Agreement was akin to Britain's appeasement of Hitler.

We've seen this kind of irresponsible reporting before — and we know that when viewers speak out, news directors listen.

Bill Nye rightfully called out CNN for including Happer in the discussion, stating "you’re doing a disservice by having one climate change skeptic and not 97 or 98 scientists or engineers concerned about climate change."

Unfortunately, CNN wasn't the only high-profile media outlet that gave a climate denier prominent platforms this past weekend. CBS Weekend News aired an in-depth segment titled "Climate Realists" on The Heartland Institute's Joe Bast. In the piece, Bast, who is not a scientist, claimed that climate change is a "naturally occurring, cyclical phenomena caused mostly by the sun" and that climate change is a positive advancement because "cold people kills more people than warm weather does."

If that wasn't bad enough, directly after its March for Science coverage, C-SPAN aired a "Science & Public Policy" panel sponsored by The Heritage Foundation and the Discovery Institute and featured a speaker from the Competitive Enterprise Institute — all organizations well-known for misleading the public on climate. And guess what? Not one scientist was on the panel.

Creating the appearance of controversy might help networks garner ratings, but it creates an ill-informed public which has potentially devastating consequences. Let's show the media that we demand more, we demand facts and accuracy.

In 2013, one-third of the climate coverage on CNN and over a half of the climate coverage on Fox News was misleading. In 2014, every Sunday show except CBS’ Face the Nation hosted a climate denier. It’s true: our mainstream news networks book fake experts —  often paid by the fossil fuel industry — and those “experts” use the opportunity to confuse the public understanding of climate.

ClimateTruth.org has successfully held CNN accountable before. A few years ago, ClimateTruth.org (then, Forecast the Facts) joined forces with the producers of Merchants of Doubt — a film that lays bare the greedy, shameful world of climate denial and the journalists who broadcast it — to end climate denial in mainstream media. And last year, over 20,000 of us pushed CNN to question the 2016 presidential candidates about climate change at the debates, and we won. Now we can do it again, starting — but not finishing  —with CNN.

Truthfully yours,
Emily, Brant, Amanda, and the rest of the ClimateTruth.org team