BUILDING TO THE SKY, WITH A PLAN FOR RISING WATERS... 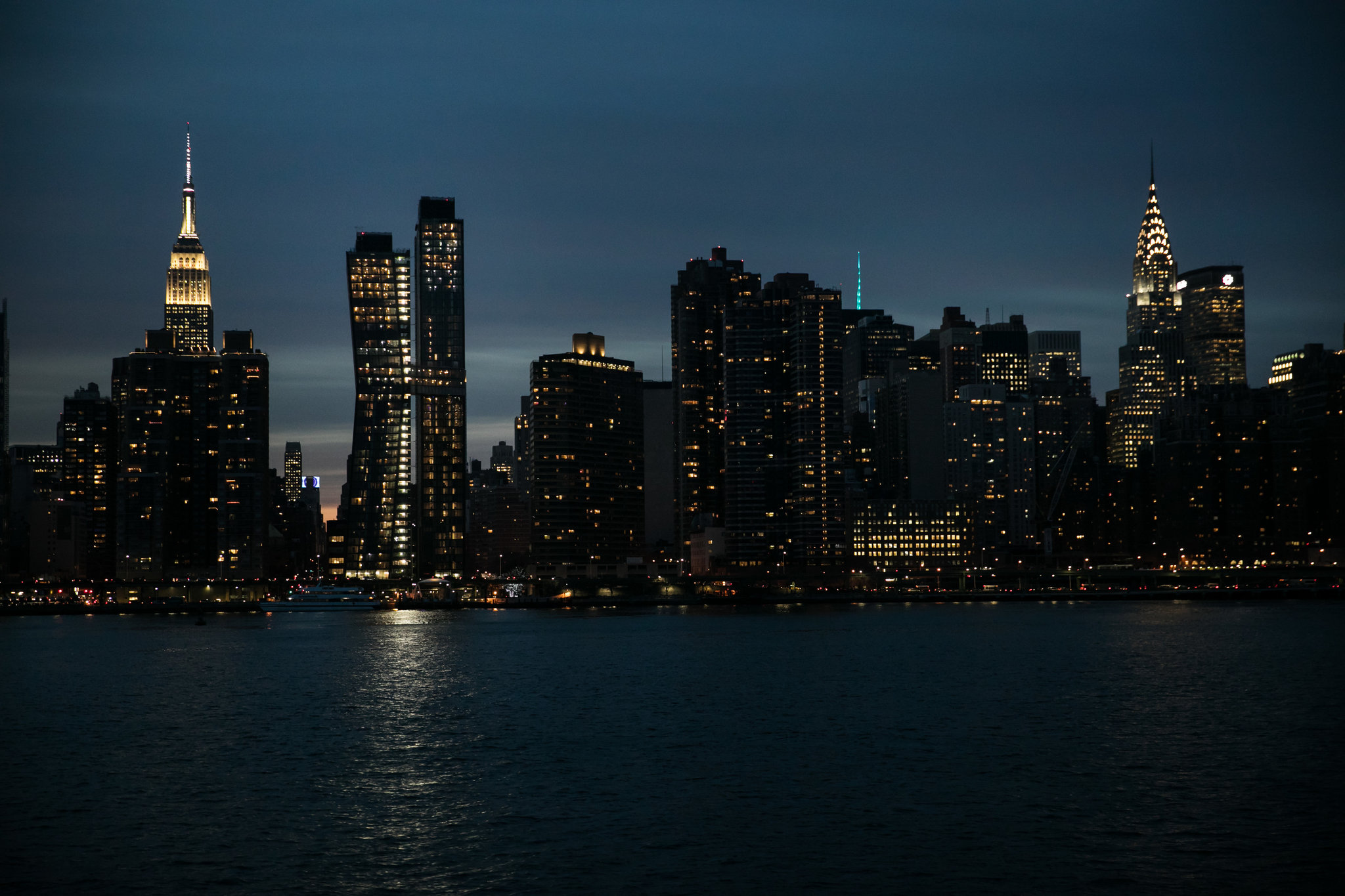 The American Copper Buildings, just right of the Empire State Building, were designed so that tenants could live in their apartments for at least a week if the area floods. Credit Todd Heisler/The New York Times

There is a breathtaking view of the mid-Manhattan skyline, pierced by the Empire State Building, from the 48th floor of the taller of two new copper-clad apartment towers along the East River, just south of the United Nations...

No plutocrat will enjoy it, however. This impressive penthouse aerie is hogged by five emergency generators. The window is already blocked by a bank of electrical switchgear. For the developers, giving up premium space to machinery is insurance against an ominous future: They want tenants in the towers’ 760 apartments to be able to live in their apartments for at least a week, no matter how high floodwaters may reach nor how long the power is out.

“We said: ‘Water is going to come in here. What are we going to do about it?’” explained Simon Koster, a principal in the JDS Development Group, which is building the towers, known as the American Copper Buildings.

JDS is in good company.

Along coastlines and lake shores and riverfronts across the country, tenants and homeowners, regulators and planners, private developers and public institutions are embracing the accumulating evidence of climate change and fortifying buildings andRelated Coverage

To an extent that would have been unimaginable before Hurricane Katrina in 2005 and Hurricane Sandy in 2012, resilient design has entered the vocabulary of architects and engineers in parts of the country at risk of inundation.

Beginning with this article, The New York Times is presenting case studies in resilient design, focused on the New York City area. The series, accompanied by a glossary, will look at steps being taken to resist floods, surges, high winds and heavy rains — steps that offer lessons to builders everywhere. It will include an old tenement on the Lower East Side of Manhattan, a new school and office building in West Chelsea, an AIDS residence in Greenwich Village, the headquarters of the West Elm chain of furniture stores in a landmark warehouse on the Brooklyn waterfront and a single-family home on Jamaica Bay.

“Rising sea levels and a changing climate present a challenge for our country’s largest city, and also an opportunity to create a more resilient, sustainable and equitable New York City,” said Daniel A. Zarrilli, the city’s chief resilience officer and the senior director for climate policy and programs in the administration of Mayor Bill de Blasio.

Whether President Trump embraces or resists the emerging notion of resilient design remains to be seen. Moments after his inauguration last week, almost every reference to climate change was removed from the White House website. But Mr. Trump did acknowledge last summer that raising the height of roadways around Miami — which is particularly vulnerable to rising seas — to keep them from flooding was “not the worst thing I’ve ever heard.” As long as local governments did it.

At first blush, it is hard to imagine 48- and 41-story apartment buildings as being vulnerable to flooding.

But between 2012, when the site of the American Copper Buildings was put on the market, and 2013, when the development parcel was acquired by JDS, the property had been inundated by Hurricane Sandy. An excavated pit about eight feet deep had become a small lake. 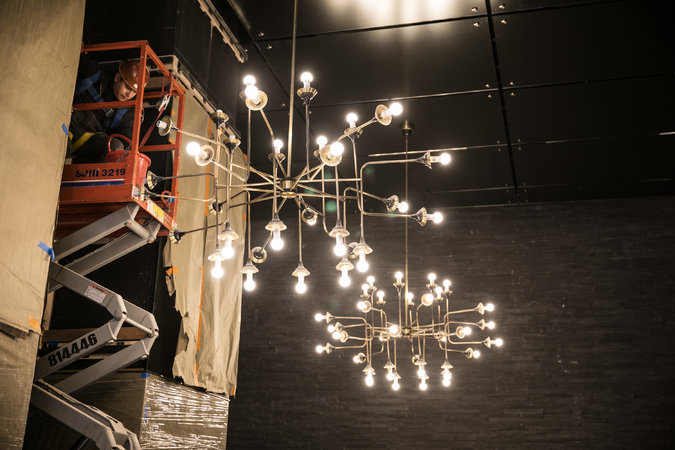 Among the more subtle choices for ensuring that the towers could quickly bounce back from a flood was to use stone, rather than wood, on the walls of the lobbies. Credit Todd Heisler/The New York Times

“We knew from the very beginning that we would have to design something that would resist this kind of flooding,” Mr. Koster said. The developers even wondered at first whether the $650 million project — the overall scope of which they inherited from the previous owner, Sheldon Solow — would even attract tenants.

A vital lesson taught by Hurricane Sandy was that high-rise apartment dwellers might be forced to live without power from Consolidated Edison, which provides electricity to New York City and Westchester County, for long periods.

There was no question about installing enough emergency generators to power the eight passenger elevators and two freight elevators, the water pumps and lighting in common areas like hallways and stairways.

But JDS took the further step of installing enough emergency generating capacity to power the refrigerator in every apartment indefinitely, as well as one outlet in every apartment that tenants can use to recharge their mobile phones, among other things.

“That’s our lifeline,” said Gregg Pasquarelli, a founding partner of Shop Architects, which designed the buildings with WSP/Parsons Brinckerhoff, BuroHappold and Scape. “If you have your phone and your refrigerator, you can survive. You could probably make it a week with those things.” 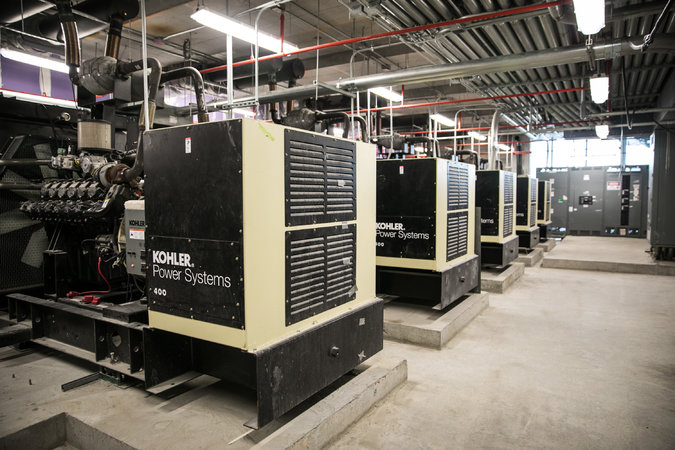 The 48th floor of one of the towers holds emergency generators that can power each apartment’s refrigerator indefinitely. Credit Todd Heisler/The New York Times

To produce that much power, five 400-kilowatt generators were installed in the west half of the 48th floor of the north tower. They are powered by natural gas. Gas-powered generators do not depend on the delivery of fuel oil, which is transported by trucks and therefore easily interrupted in big storms.

“There is switchgear in what would normally be penthouse space,” Mr. Koster said. But the provision of ample emergency power was seen as an asset and a selling point to New Yorkers scarred by memories of Hurricane Sandy. “We figured every apartment would be more valuable than getting however many dollars per square foot for the space you’re standing in,” Mr. Koster said amid the generators.

As of 2014, and in response to Hurricane Sandy, New York began requiring that mechanical systems be installed above the “design flood elevation” — one or two feet higher than the highest expected flooding — at buildings, like American Copper, that are being constructed or substantially renovated in a floodplain.

There was no such mandate in 2013, Mr. Koster said. But the architects and engineers of American Copper did not need their arms twisted.

“All the buildings with equipment in the basement got rocked by Sandy,” Mr. Pasquarelli said. “It took them six months to recover. We said, ‘Let’s lift all the equipment to the second floor.’” 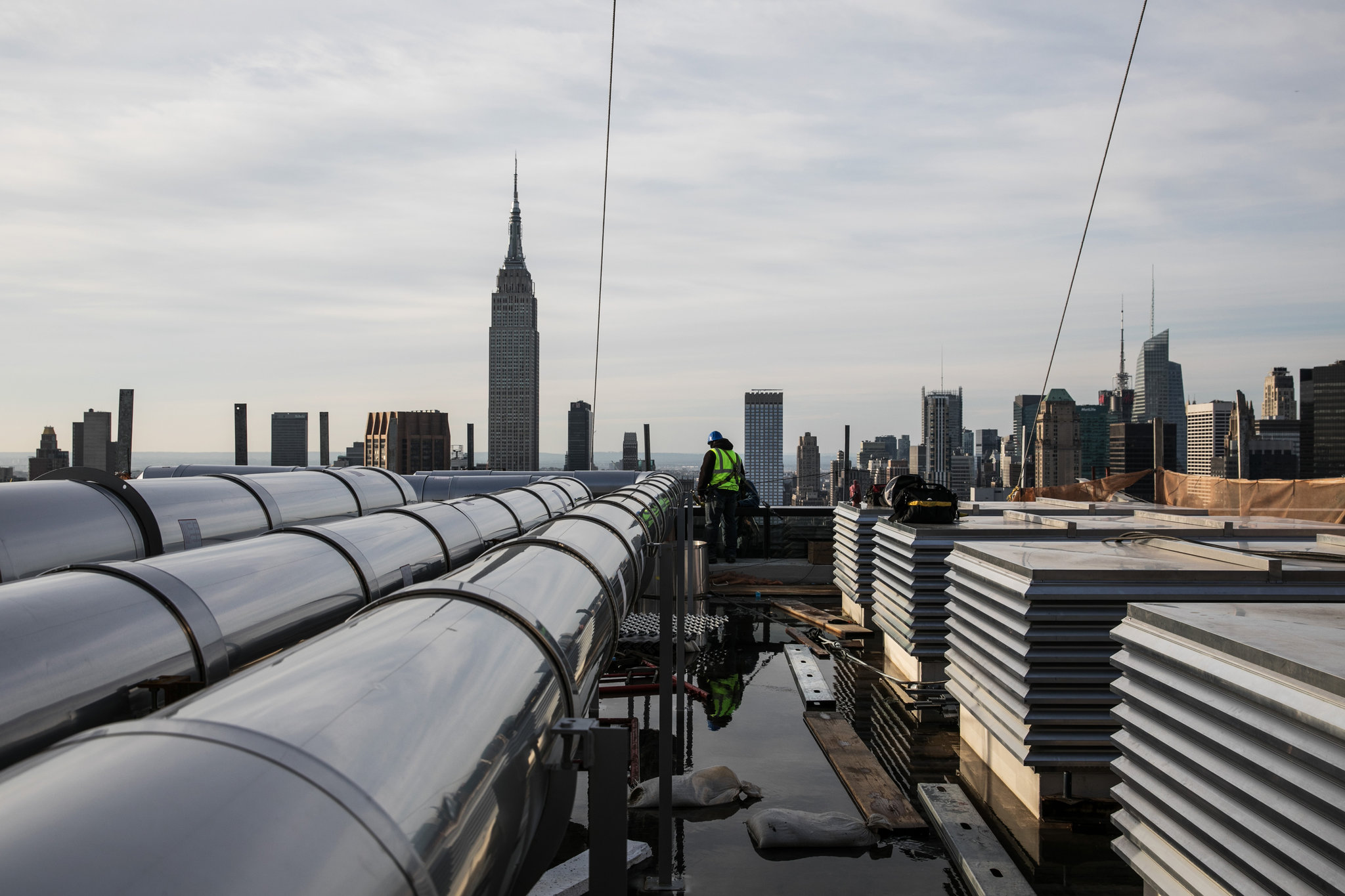 The view from the roof of one of the American Copper Buildings, in Manhattan near the East River. At right are exhaust vents for the enormous generators below. Credit Todd Heisler/The New York Times

Some of the mechanical systems are actually visible through second-floor windows along First Avenue. Louvers elsewhere on the second floor — where windows would ordinarily be found — also disclose the presence of equipment.

There are other obvious, if subtle, accommodations to the water. The copper cladding that distinguishes the towers does not start at ground level, but 20 feet above the base, so it will never be submerged. The main lobby walls are covered in stone, rather than wood.

Some mitigation measures are invisible. For instance, there is an 18-inch-deep gravel bed, sandwiched between two concrete slabs, under the buildings’ subbasements. Excess storm water will collect in this bed and empty gradually through perforated pipes threaded through the gravel.

Those pipes will carry the water to sump pits, from which it can be pumped into the city’s storm sewer system when the rain subsides.

More than 1,000 prospective tenants have asked for information on the 600 market-rate apartments at American Copper (one-bedroom units start at $3,600 a month), a spokesman for the developers said, though the buildings will not open until next month. And 79,000 applications have been received for the 160 subsidized affordable units in the complex (one-bedroom units start at $895 a month).

“There is a huge amount of interest in this project, which justifies the unique approach we took,” said Michael Stern, the founder and chief executive of JDS.

It would seem — for now — that people will still move to the waterfront, if they are persuaded their homes can weather the coming storms.

David W. Dunlap has covered the built environment of New York City for The New York Times since 1981: infrastructure, architecture, engineering, landmarks, public spaces and transportation — including Macy’s wooden escalators. His reporting since 2003 has concentrated on the redevelopment of the World Trade Center. He also serves as the keeper of Times history. Dunlap's books include “Building Provincetown” (2015) and “From Abyssinian to Zion” (2004).Twitter @DavidWDunlap