CALIFORNIA, PARCHED FOR 5 YEARS, IS NOW BATTERED BY WATER... 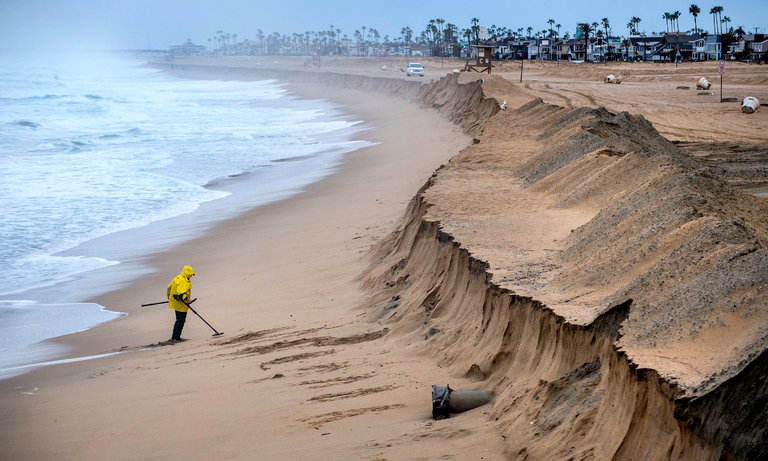 Newport Beach in Southern California. A powerful storm swept through that region of the state on Saturday. Credit Mark Rightmire/The Orange County Register, via Associated Press

A powerful storm with near hurricane-force winds swept through Southern California on Saturday, killing at least two people and causing widespread disruptions, but providing a definitive respite from five years of drought...

Amid one of the wettest winters in decades, more heavy rainfall was due to strike Northern California starting on Sunday.

“I’ve been a meteorologist here for 25 years and I personally can’t remember a storm that had that much wind with it,” said David Sweet in the Los Angeles office of the National Weather Service. “It was a very impressive storm.”

Parched for the past five years, California now finds itself in some areas with too much water.

Workers have rushed to fix the damaged embankment of the Oroville Dam north of Sacramento, which this past week was weakened by water discharged from an emergency spillway. Some forecasts said that the area could be hardest hit by the new round of rainfall on Sunday.

At the Port of Los Angeles, winds reached 75 miles an hour on Friday, just above the threshold to be considered a hurricane, Mr. Sweet said. Rainfall on some inland mountain slopes reached nine inches, the same amount of precipitation that would normally fall during an entire winter month.

Mr. Sweet described a plume of moisture extending from Hawaii to Southern California, bringing with it tropical moisture. “It was an atmospheric river,” he said.

The combination of wind and rain knocked down trees across the Los Angeles area, prompted mudslides, flooded freeways and opened up a sink hole in the San Fernando Valley large enough to almost swallow two cars.

Tens of thousands of Southern California residents lost power during the storm, portions of Amtrak train service were suspended and dozens of flights were canceled or delayed.

The two storm-related deaths involved a person retrieved from a flooded vehicle and a man electrocuted by felled power lines.

The frequent winter storms are taking a toll on other parts of the state’s infrastructure, with landslides closing a number of roads. A bridge at the tourist town of Big Sur was closed by the authorities this past week, cutting off access to part of the town. An online map by the California Department of Transportation showed at least 70 road closings.

Although the state government has not officially declared the drought over, the winter rains and accumulated snow in the Sierra have given California water reserves not seen in years.

“You would be hard-pressed to say we have a surface water drought right now,” said Jay Lund, a water expert at the University of California, Davis.

In a sign of the abundance of water, Southern California is no longer drawing from the Colorado River, Mr. Lund said.

“I can’t recall a time when we didn’t draw from the Colorado River Aqueduct,” he said.

On Friday, as the storm was pushing through Southern California, the snowpack in the Sierra over all was 174 percent of normal, according to the California Department of Water Resources. The accumulated snow serves as crucial water storage during the long and usually very arid summer months that are effectively an annual drought.

The state’s system of reservoirs, another key source of water during the dry season, are also at levels not seen in years. Taken together, the reservoirs are 122 percent of average, according to data from the State Water Board on Saturday.

This month the board extended water conservation regulations out of fears that the generous precipitation could taper off before the state’s winter rainy season ends. The water board said that it was “beyond happy” about the wet winter, but that “we know that weather can change quickly.”

While the level of rain and snowfall this winter has provided promising signs for officials who monitor the state’s drought, a complete recovery from the effects of five very dry years will take years more. More than 100 million trees have died in California since 2010, in large part because they were parched. Rivers and streams lost fish. And crucial to the state’s huge agriculture industry, ground water was depleted.

“The ground water drought is likely to linger for quite some time,” Mr. Lund said, “in some areas possibly permanently.”