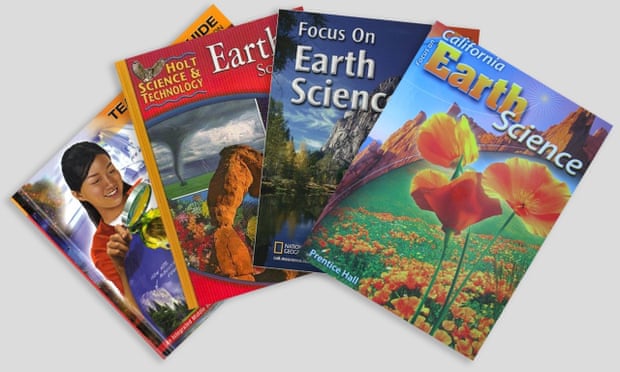 Books voice doubt over whether climate change is real and suggest global warming could be beneficial, researchers say in analysis of four science texts...

Textbooks in California public schools are misleading students on climate change, with material that expresses doubt over whether it is real and promotes the view that increasing temperatures may be beneficial, according to a Stanford University study.

An analysis of four key science texts given to sixth-grade students in California showed that the books “framed climate change as uncertain in the scientific community – both about whether it is occurring as well as about its human-causation”.

Researchers studied 2,770 words used in the books, which are given to students as their first introduction to climate science, and found that the widely accepted opinion that the climate is changing and that humans are the main cause wasn’t represented in the books.

Whereas California science textbooks on other subjects list facts, the books focused on climate change use conditional words like “could”, “might” or “may” throughout. Three of the textbooks are called Focus on Earth Science, published separately by Prentice Hall, Glencoe-McGraw-Hill and CPO Science. The fourth is called Earth Science, published by Holt, Rinehart & Winston.

The Prentice Hall book, first published in 2008, states: “Not all scientists agree about the causes of global warming. Some scientists think that the 0.7C degree rise in global temperatures over the past 120 years may be due in part to natural variations in climate.”

The same book stresses that climate change “could have some positive effects”.

“Farmers in some areas that are now cool could plant two crops a year instead of one,” it reads. “Places that are too cold for farming today could become farmland. However, many effects of global warming are likely to be less positive.”

Meanwhile, Earth Science has a passage that reads: “Until recently, climatic changes were connected only to natural causes. However, studies indicate that human activities may have an influence on climate change.”

The Stanford University study concludes that the language used in the textbooks is likely to promote doubt over the science of climate change and dampen any sense of urgency in dealing with the issue.

“Instead of saying climate change is happening, it’s: ‘Climate change may be happening,’ which isn’t what is generally known and understood,” said KC Busch, of Stanford Graduate School of Education. Busch conducted the work with assistant professor Diego Roman, a linguist at Southern Methodist University in Dallas.

“The inference throughout these books is to create doubt,” Busch said. “Perhaps the textbook companies are making them palatable in a politically charged environment in order to get published. I think they are softening the language. I’m shocked that California has allowed them, to be honest.”

Busch said textbooks shouldn’t be prescriptive works that “scare the wits” out of sixth graders, but should accurately represent the science.

“There is an ideology in these books. They use the same kind of language seen on climate change denier blogs,” she said. “These books should present accurate information and then let students explore the issues further. Saying that ‘if temperatures go up, climate change could occur’ is completely misleading. We don’t want children to be brainwashed; we just need to be clear about what scientists know and what they are uncertain of. We know temperatures are going up, that humans are the main cause that this is causing climate change.”

Busch said that uncertainty over climate science propagated by textbooks only adds to confusion over the issue. Recent research by Yale University found that only 57% of US teenagers understood that global warming was fueled by human activity such as burning fossil fuels. This is, however, still slightly higher than the 50% of US adults who accept the science.

The California State Board of Education produces a list of recommended textbooks that school districts can choose from, though they are not mandatory. The board said on Monday that a new round of textbooks was currently in development and would be introduced in 2018. Three of the publishing companies did not respond by Monday evening to requests for comment from the Guardian.

A spokeswoman for Pearson, the company that owns Prentice Hall, said: “Pearson curriculum is developed by expert author teams and is reviewed by independent, academic reviewers.

“We always are committed to presenting balanced, unbiased, and accurate material, and welcome the opportunity to meet with parents and educators to listen to their concerns about textbook content.”

Scientists have known for more than a century that certain gases, like carbon dioxide, trap heat. Last year, more than 32bn tonnes of these greenhouse gases were pumped into the atmosphere by human activity, including power plants, agriculture and transport. These emissions have helped push the world’s average temperature up by around 1C over the past century, fuelling sea level rises and extreme weather events.

Representatives from nearly 200 countries will gather in Paris next week for highly anticipated talks on how to reduce emissions and stay within an internationally agreed target of ensuring the world doesn’t breach 2C of warming. Analysis has shown that emissions cuts already announced by emitters – including the US – will still take temperatures to around 2.7C above the pre-industrial average, leading to extreme heatwaves, coastal erosion and food insecurity for many countries.