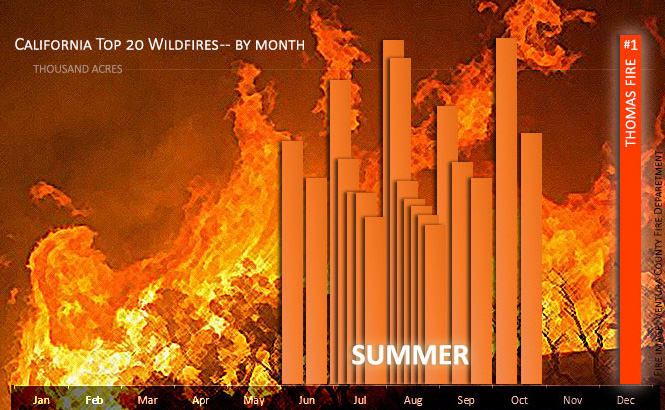 The Thomas December 2017 fire is now the largest one in California's record books. Image courtesy of the Ventura County Fire Department

The freakish, "rainy-season" Thomas Fire in California has just burned itself into the record books. On Dec. 22, 2017 it officially became the state's largest recorded wildfire, having already burned 273,400 acres...

At only 65 per cent contained, it is expected to burn through Christmas and into the new year, during what is supposed to be the area's wettest season. As the Los Angeles Times reports, the Thomas Fire has done all that despite a record number of firefighters (8,500) and record amount of money ($175 million) spent trying to halt the beast.

To illustrate just how abnormal the Thomas Fire is I created the graphic below, using the state's top 20 fires list. It shows you which month of the year each fire took place. Notice anything unusual?

Yep. All the past mega-fires have happened in the five months centered around summer. None have burned in the traditionally wetter and cooler months from November thru May. Until this year, that is. As Dana Nuccitelli points out in his insightful coverage of the climate science around California wildfires in the Guardian: "this was predicted by climate scientists." Indeed, scientists have been warning for years that climate change is going to expand California's fire season into a year-round threat. The Thomas Fire is a prime example of how the old "normal" is disappearing.

Another long-standing projection of climate science is that climate change will increase the total number of acres burned in California and throughout the American West. Sure enough, studies show that acres burned per year have doubled during the last three decades.

My next graphic arranges the same top 20 wildfires, but this time by the year they occurred. As you can see, nearly all of them have occurred in the recent years. And that's with just +1oC in global warming. We are on track for +4oC during the lifetime of today's children.

The Thomas Fire is one in a long line of beyond "normal" events to hit the Golden State recently. Here's a list of some of California's recent whiplashing climate records:

I remember vividly the winter day, back in 2009, when U.S. Secretary of Energy Steven Chu, the Nobel Prize-winning physicist, voiced his deep concerns for what climate change could do his home state: "I don't think the American public has gripped in its gut what could happen … We're looking at a scenario where there's no more agriculture in California." And, he added, "I don't actually see how they can keep their cities going" either.

It seemed like science fiction at the time. But so did the notion that more than 100,000 Californians would have to evacuate — in December — fleeing the state's all-time largest wildfire on record.