CALIFORNIA WON'T MEET ITS CLIMATE CHANGE GOALS WITHOUT A LOT MORE HOUSING DENSITY IN ITS CITIES... 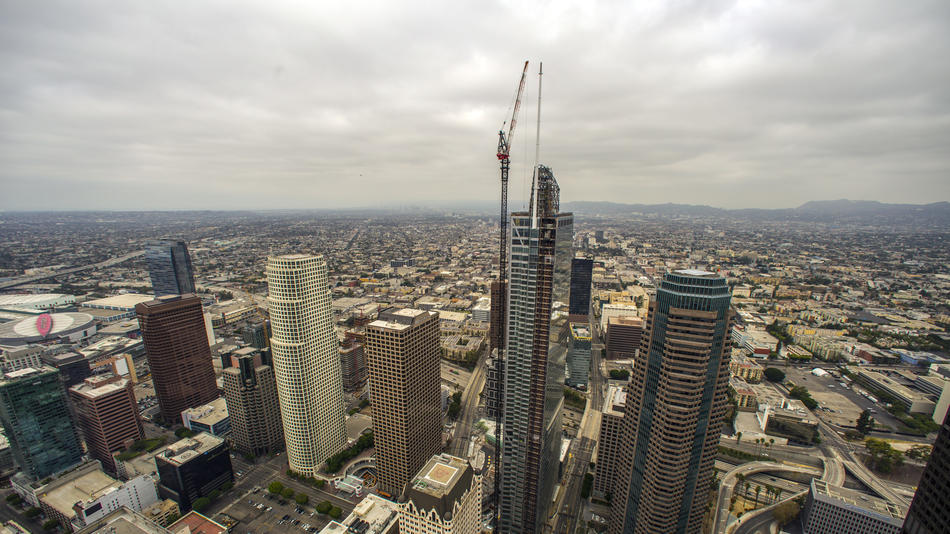 The installation of the spire atop L.A.'s 73-story Wilshire Grand, the tallest skyscraper in the West, in September 2016. (Irfan Khan / Los Angeles Times)

To meet the bold new climate change goals put in place last year, California will work to put millions of electric cars on the road, revolutionize its dairy industry and generate half of all power from solar panels and other renewable sources...

But those efforts will come up short, warn state regulators, without dramatic changes to how Californians live and travel.

The state has pledged to reduce its greenhouse gas emissions to 40% below 1990 levels by 2030. To do so, Southern Californians will have to drive nearly 12% less by that date than they did five years ago, cutting their miles on the road every day from 22.8 to 20.2, according a Los Angeles Times estimate based on data from state and regional climate and planning officials.

Getting people out of their cars in favor of walking, cycling or riding mass transit will require the development of new, closely packed housing near jobs and commercial centers at a rate not seen in the United States since at least before World War II, according to a recent study by permit and contractor data analysis website BuildZoom.

“You can’t be pro-environment and anti-housing,” said Marlon Boarnet, chair of the Department of Urban Planning and Spatial Analysis at USC’s Price School of Public Policy, who has advised state climate regulators on land-use issues. “You can’t be anti-sprawl and anti-housing. This is something that has not been very well understood.”

The primary question in meeting the reduced driving goals, Boarnet and other planning experts said, is whether cities and counties will sign off on the massive amount of housing needed in already developed neighborhoods. Local governments, not the state, largely govern the approval of new housing.

Even now, the effort to shift development from suburban to urban areas is facing strong head winds. Across California, local resistance and an existing state environmental law that prioritizes car travel over mass transit have frustrated attempts to plan and build housing that will help the state meet its climate goals.

Hasan Ikhrata, the executive director of the Southern California Assn. of Governments, which is responsible for implementing a plan in Los Angeles, Imperial, Orange, Riverside, San Bernardino and Ventura counties to meet the new climate goals, believes the new push to reduce driving is too difficult to achieve.

“We’re going to do our best, but I think it’s too ambitious, to be honest with you,” Ikhrata said.

California’s largest portion of greenhouse gas emissions comes from pollution generated by cars and trucks. Climate regulators want to cut traffic emissions by replacing gasoline-powered vehicles with electric versions — the goal is to have 40% of all new car sales be zero-emission vehicles by 2030 — and by vastly reducing the amount of carbon in fuel. But even if the state reaches those targets, the amount of pollution emitted from cars and trucks will still be too high to meet the state’s environmental targets. The only way to make up the difference is for people to drive less.

State climate officials don’t assume that everyone will spend less time on the road, but they’re planning for a significant percentage of Californians to do so — and for many to abandon cars altogether. For that to happen, more people will have to live near where they work or shop, which means more housing in urban neighborhoods and other job centers. On top of that, the state’s population is expected to grow by 4.5 million people by 2030.

Since 2008, state law has required the Southern California Assn. of Governments and California’s other regional governments to plan their residential growth to meet the climate goals.

But those efforts haven’t been enough. In a series of reports over the last year, climate regulators have said California needed to reduce driving by an additional 15% over what regional governments have already planned to meet the 2030 greenhouse gas targets. That means even more closely packed housing than previously anticipated will be needed.

Such efforts would concentrate growth in cities and the suburbs immediately next to them.

“Nowhere is going to look like Singapore or Hong Kong or Manhattan, but there will be intensification of development in central areas and in some outlying areas,” said Steve Winkelman, director of the Center for Clean Air Policy, a Washington, D.C., nonprofit that has studied the land-use implications of the state’s climate targets. “The central areas will look a lot more like European cities, with good transit access and pedestrian access.”

Those changes could require California cities to encourage home building at an unprecedented rate in neighborhoods that are already developed. In the United States, no city’s housing growth has kept pace with increased demand through development centered in an urban core since at least the 1940s, the BuildZoom study found. Cities where housing supply met demand only achieved that balance by sprawling outward.

Should California cities attempt to grow rapidly within existing urban areas, it will mean supporting redevelopment of some single-family neighborhoods that planners have long considered untouchable because of local resistance, according to Issi Romem, BuildZoom’s chief economist.

“I can’t imagine it happening,” Romem said. “It doesn’t feel realistic to me.”

In late 2015, San Diego passed some of the nation’s toughest restrictions on greenhouse gas emissions, pledging to meet the state’s 2030 climate goals and allowing environmentalists to sue the city if those targets aren’t met. The city plan calls for greater density and transit improvements in existing urban neighborhoods with the hope that half of residents in those areas don’t drive to work. But city officials recently signed off on three new development blueprints in neighborhoods adjacent to San Diego’s downtown, none of which meet the target.

If San Diego neighborhoods most primed for heavy development don’t achieve the goals, it’s unlikely the rest of the city will pick up the slack, said Nicole Capretz, who wrote much of the climate plan while working for the city.

“We are setting ourselves up for failure,” said Capretz, who now runs an environmental nonprofit. She said she’s already considering a lawsuit challenging the city’s efforts to meet the climate targets.

Nearly 15 years ago, Sacramento-area planners developed a blueprint for the region’s growth that aimed to direct development toward existing urban neighborhoods or near transit stations. But a 2015 study in the Journal of the American Planning Assn. found that builders continued to construct more new homes in the Sacramento suburbs. The study concluded that economic conditions, demand and neighborhood resistance to tightly packed housing were far more important factors in deciding where homes were built than the regional plan.

In some cases, the state’s environmental laws can run counter to each other. The California Environmental Quality Act, the state’s primary environmental law that has governed four decades of development, requires projects to measure effects on car congestion on roads — but it does not address the total number of miles driven. So developments get little relief under the law for efforts to increase bicycle or pedestrian access — and, because adding a bike lane could mean removing one for cars, oftentimes are even penalized for doing so. State officials began writing new CEQA regulations to change those rules in 2013, but they’re unlikely to be completed before 2018, a spokesman for Gov. Jerry Brown said.

CEQA lawsuits from 2013 to 2015 challenged more than 10,000 housing units in the Southern California neighborhoods designed to take on the most growth under the Southern California Assn. of Governments climate plan, according to a study by law firm Holland & Knight, which has written a series of reports about CEQA’s effects on development.

Pavley favors strong state intervention to force the automobile, energy and agricultural industries to adapt to greenhouse gas regulations. But she doesn’t believe state officials should take power away from cities and counties, even if that means local governments continue to reject climate-friendly projects.

Some widely used efforts to increase urban home building, such as loosening local regulations so homeowners can more easily turn their garages into second residential units, or reducing parking requirements for projects within half a mile of transit stations, can go too far, she said.

Others argue the state will have to do more.

Boarnet, the USC professor, said there are some reasons for optimism about reaching the targets, including Los Angeles’ recent approval of Measure M, which increased the county sales tax by half a penny and is expected to generate $120 billion in transit improvements over the next four decades. But that money won’t do enough to address the region’s climate issues unless significant amounts of tightly packed housing are developed alongside the rail and bus lines expected to be built, he said.

“To be blunt, the state’s going to have to take some leadership,” Boarnet said. “We’ve tried very strong municipal control, and in the case of Los Angeles, strong neighborhood control. And we’ve found that that doesn’t let us build the housing that we need in the locations that we need it.”