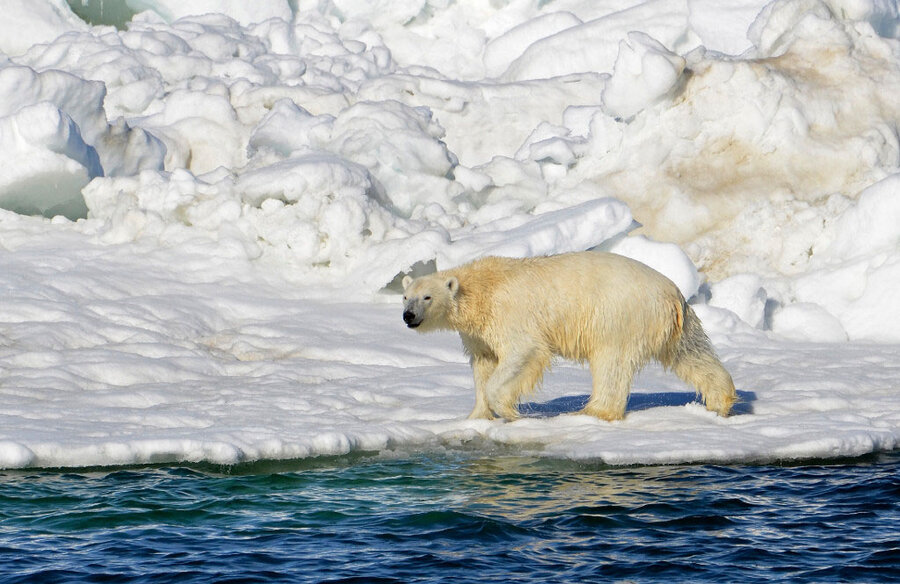 A 2000 treaty committed the two nations to study and conserve their polar bears. Even as political tensions rise, climate change and other pressures make their work more necessary than ever...

American perceptions of Russia may have soured in recent weeks, as evidence mounts that President Vladimir Putin intervened to tip November’s US presidential election in favor of Donald Trump.

But while concerns over Russian political interference grow in Washington, the frigid waters between Alaska and Siberia have seen greater collaboration from both the United States and Russia, as scientists from both nations study and protect the region’s polar bears.

"In the US, polar bears are active mainly in the spring and summer when ice usually remains," Alexander Gruzdev, the head of the Wrangel Island Reserve, told Russia Beyond the Headlines, a state-owned news agency. "They come to Russia in autumn when they can still hunt because there is no ice yet, and they remain here until early spring." These seasonal migrations mean that the Chukotka-Alaska polar bear population, one of 19 such groups, straddles Russian and American waters.

Since 2009, the US-Russia Polar Bear Commission has brought scientists from the two countries together to study these animals. The group has survived the recent chill in relations, and sets guidelines for both countries to protect their polar bears, as Arctic ecosystems face a wide range of challenges.

"We must try to understand what is happening on both sides of the border in order to save the polar bears," Dr. Gruzdev said of the Commission’s work. The United States and Russia signed a bilateral agreement to protect these animals in 2000, and created the Commission to incorporate federal and native representatives in making management decisions. The agreement also established a Scientific Working Group to advise the commission.

At its most recent meeting, in November 2016, the Commission’s Scientific Working Group presented the results of several studies from the past year, including an expedition to Wrangel Island, a Russian-owned territory in the Arctic Ocean where polar bears spend their winters. The researchers found that the bears there remained in "good body condition," and requested support for continued research on the island.

Beyond research, this group also helps preserve a delicate balance between bears and humans by imposing kill limits. In 2015, 12 bears were killed in Alaska’s portion of the Chukchi Sea, says Hilary Cooley, polar bear project leader at the US Fish and Wildlife Service, in a phone interview with The Christian Science Monitor. Numbers for 2016 have yet to be reported, but the Commission allowed a total take of 58 bears, split evenly between the two countries.

In Dr. Cooley's view, poaching poses a larger threat than legitimate hunting, and that's where cooperation with Russia could yield the most improvement. "I think it’s been a really good partnership with Russia," she says. "They’ve made some strides in implementing a legal harvest. They have not had a legal harvest anywhere for many years. Our goal is to help them get a legal harvest. We hope that that would reduce poaching in the area."

Even if the Commission’s Russian members can bring poaching under control, its scientists will need to assess other threats in coming years. The No. 1 threat to polar bears is climate change, as USFW stressed in a recent conservation plan, "and that without significant action their chances of long term survival at current levels are low."

Vanishing sea ice might not spell doom for polar bears, however. Bears in the Hudson Bay have already begun to incorporate more land-based food into their diet, Robert F. Rockwell, a biologist at the American Museum of Natural History, told The Christian Science Monitor on Monday. But if Alaska's bears also move inland, feeding on local game populations and coming in greater contact with humans, managing the species while meeting local communities' needs may grow more challenging. Cooley pointed out that most of 2015’s kills were either made by subsistence hunters or to defend human life.

Other climate-change related changes may further add to the Commission’s workload. A 2014 study from the Copenhagen Business School found that, because of melting sea ice, "Arctic liner shipping may become economically feasible around 2040," and that the Bering Strait, which bisects the Chukotka-Alaska population, could become a new artery for global shipping.

by: Patrick Reilly
source: http://www.csmonitor.com/
original story HERE
If you would like to share this blog story on Facebook with one easy click, scroll down to the very bottom of this page and look for the SHARE button along with the Facebook LIKE button under the "Sign up to Learn About & Help End Global Warming” boxed area where people enter their email address. You do not need to enter any email address to use the one click Facebook SHARE button.
Get more of The Global Warming Blog. Bookmark this page and signup for the blog’s free RSS Feed. Sign up for free Global Warming Blog by clicking here. You will automatically be emailed a regular summary of the latest global warming headlines.
To learn about more about global warming, climate change or greenhouse gases as well as the causes, consequences, solutions, definitions, facts and tipping points related to these subjects, click here.
To see our most current positions, opinions, comments, agreement or disagreement with this article, and/or possible criticisms related to the subjects or facts raised in the above article, click here.  Then look for those subjects in the navigation links at the top the page.
To sign a critical petition for declaring an international global warming State of Emergency, click  here!