CAN THE REPUBLICAN PARTY SOLVE ITS SCIENCE DENIAL PROBLEM? 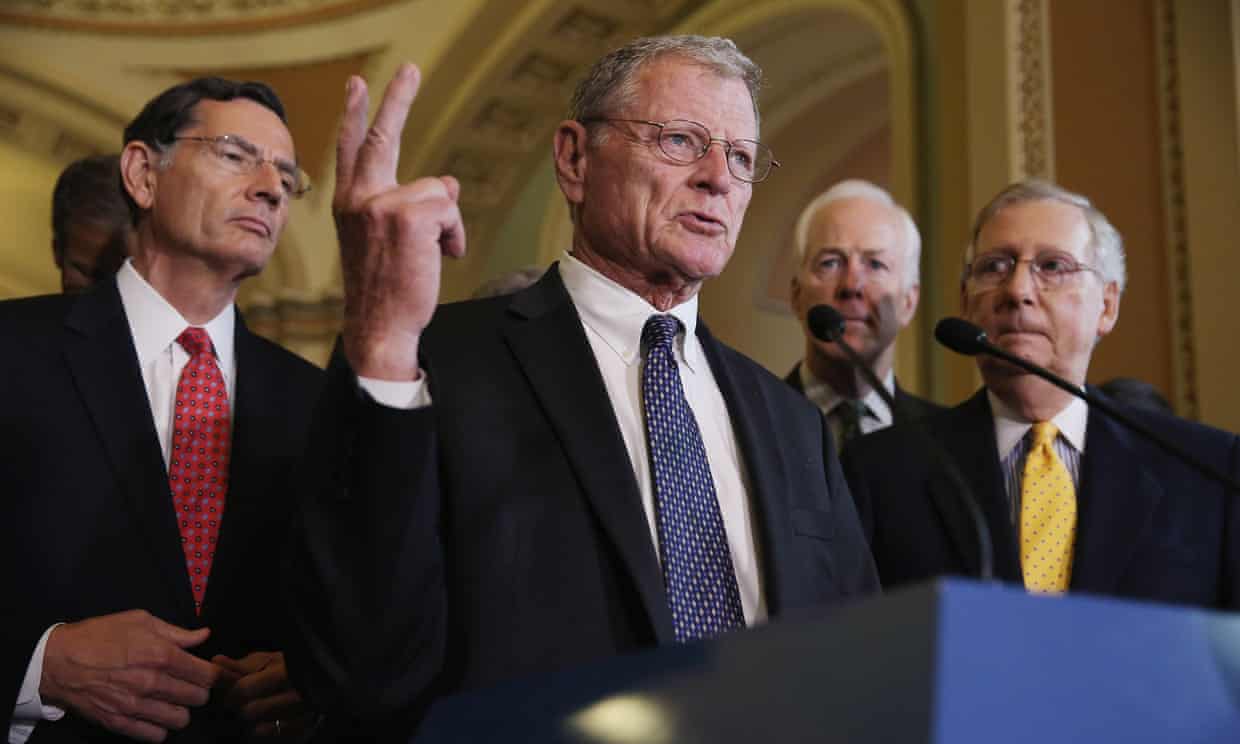 Evolution and climate science denial are predominant on the political right; there is no equivalent on the left...

There’s a widespread misconception about science denial – that on issues like the safety vaccines and genetically modified foods (GMOs), denial is found predominantly on the political left, mirroring the denial of evolution and climate science on the political right. This assumption has even been presented on The Daily Show, but it’s supported by precious little evidence. In fact, as Chris Mooney documented in great detail in 2014:

[The data] do not support the idea that vaccine denial is a special left-wing cause. As for GMOs, while resistance may be strongest on the far left, worries on this issue are quite prominent across the spectrum as well.

In neither case are these beliefs a mirror image, on the left, of climate change or evolution denial [on the political right].

A new YouGov poll provided yet more data, asking, “Do you think it is generally safe or unsafe to eat genetically modified foods?”. There was little difference in answers across political affiliations – Democrats and Republicans were evenly split on the question of safe/unsafe, and Independents were more likely to consider GMOs unsafe. Gender and family income best predicted the answers, with men and higher-income individuals more likely to consider GMOs safe.

Those surveyed were also asked if the science supporting the safety of childhood vaccination is indisputable. In this case, Democrats were the most likely to answer yes (68%) rather than no (21%), followed by Independents (53% to 33%), with Republicans expressing the least confidence in the science supporting vaccine safety (47% yes, 42% no). Contrary to The Daily Show clip, these data show that vaccine science denial is more prevalent among conservatives than liberals.

A 2013 paper by Stephan Lewandowsky and colleagues investigated the links between ideology and science denial. The study similarly found no evidence of symmetrical science denial between liberals and conservatives on different issues. The authors concluded that conspiratorial thinking and free market support - both prevalent on the political right - were most strongly related to science denial:

Free-market worldviews are an important predictor of the rejection of scientific findings that have potential regulatory implications, such as climate science, but not necessarily of other scientific issues. Conspiracist ideation, by contrast, is associated with the rejection of all scientific propositions tested.

The study found that libertarian objections to government intrusion arising from mandatory vaccination programs explained the prevalence of anti-vaccine views among conservatives. They also found that those on the liberal side of the spectrum are more likely to distrust the pharmaceutical industry, and thus also oppose vaccinations, but as borne out by the YouGov poll data, this appears to be a smaller effect. On GMOs, the Lewandowsky study found no link between trust in science and ideology, again, consistent with the latest polling data.

The YouGov poll also asked respondents “Generally speaking, how much trust do you have that what scientists say is accurate and reliable?”. There was little difference between various ethnicities, ages, geographical regions, or genders. However, Democrats were far more likely to trust scientists than Republicans, with Independents falling in the middle, but closer to Republicans.

These results are consistent with a 2012 paper by Gordon Gauchat, which found:

public trust in science has not declined since the 1970s except among conservatives and those who frequently attend church. 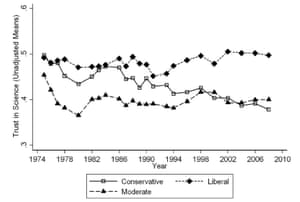 This rising distrust of science is particularly high among higher-educated conservatives, in what’s been coined the “smart idiot” effect. Essentially, on complicated scientific subjects like climate change, more highly-educated ideologically-biased individuals possess more tools to fool themselves into denying the science and rejecting the conclusions of experts.

Chris Mooney has attributed these trends to the growth of the ‘religious right’ and other changes in the Republican Party:

Clearly, The Republican War on Science’s politicization thesis is being strongly validated—a thesis that attributes the problem to the growth of a modern conservative movement, its need to appease its core interest groups and constituencies (corporate America, conservative Christians), its need to have its own alternative expertise and journalism (think tanks, Fox, Limbaugh), and so on … as the “New Right” emerged in the U.S. in the wake of the cultural battles of the 1960s and 1970s, it mobilized strong forces of authoritarianism–e.g., psychological rigidity and closed-mindedness.

Indeed, authoritarians favor Donald Trump, whose supporters have considerable overlap with climate science denial. Robert Brulle’s research into the ‘dark money’ funding climate denial also helps explain the problem. The Republican Party has become increasingly dependent upon corporate funding and support, which is heavily skewed in the direction of climate denial. The near-total abandonment of party leadership on the climate issue has sent a signal to Republican voters – climate change isn’t a concern, and anyone saying otherwise is part of the hoax.

A glimmer of hope for Republicans

The growth of this anti-science strain of the Republican Party thus seems to stem from multiple sources: increased party reliance on the religious right and corporate interests, and the growth of a right-wing media echo chamber that feeds anti-science conspiratorial thinking.

However, there is good news. For one, climate denial is largely limited to a small and dwindling group of old, white, male conservatives; hence, it’s not a tenable long-term position for the Republican Party. Like opposition to gay marriage, science denial is a position that will increasingly alienate young voters in particular, who will bear the brunt of the consequences of climate inaction.

The party’s chosen path has also resulted in the Donald Trump candidacy, which has GOP leadership in a panic. For these reasons, a rebound away from extreme partisanship and towards reality may be imminent. Already a group of House Republicans signed the Gibson climate change Resolution and formed the bipartisan Climate Solutions Caucus, acknowledging the reality of human-caused climate change and the need to do something about it.

Perhaps this blossoming Republican climate leadership will trickle down to reverse the ideologically-based science denial among too many party members.