CANADIAN SCIENTISTS KNOW WHAT TO EXPECT FROM TRUMP... 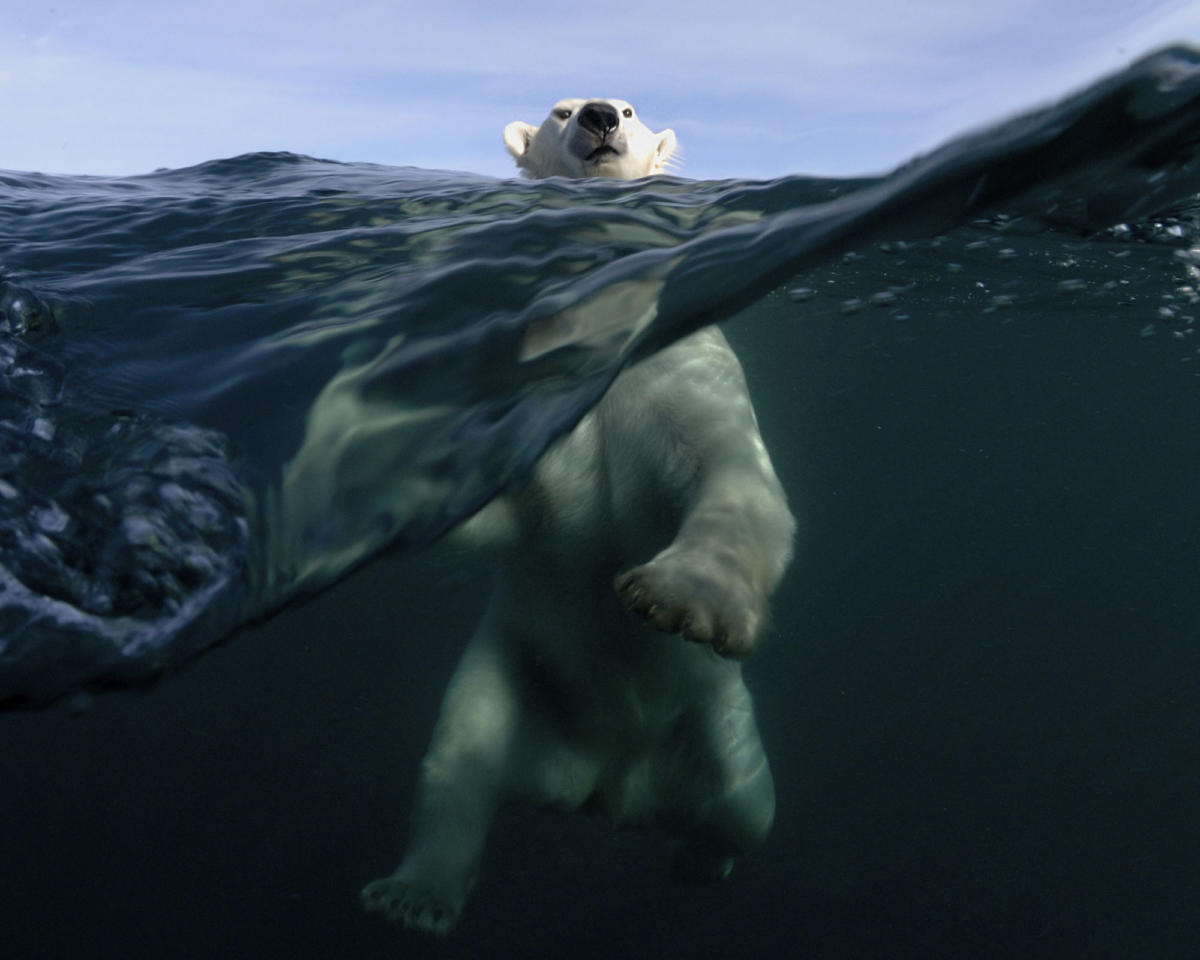 During Stephen Harper’s tenure as Prime Minister of Canada, scientific research on polar bears was politicized, the type of development American scientists fear under Donald Trump.PHOTOGRAPH BY JOE BUNNI / GETTY

The Canadian biologist Ian Stirling has spent much of his life with polar bears. Now seventy-five years old, he joined the Canadian Wildlife Service in the early nineteen-seventies, at a time when no one was doing much in the field beyond tagging the bears and waiting to see where they went...

For years, the government paid little attention to how Stirling spent his time; he even did much of his own fund-raising. But, beginning in 2006, when the conservative, business-friendly government of Prime Minister Stephen Harper came to power, Stirling and thirty-six thousand other federal scientists were abruptly forbidden to talk about their work publicly, unless their statements had been vetted and approved by bureaucrats in Ottawa. The policy lasted for nine years, until 2015. In that time, according to Elizabeth May, the leader of Canada’s Green Party, Harper’s “Orwellian” requirement became “a humiliation for scientists, and brought us into international ridicule.”

Since Donald Trump’s Inauguration, U.S. scientists have begun looking north for signs of what’s to come. Within a few days of assuming office, Trump unveiled a raft of measures that could affect how research in this country is funded and communicated to the public, including a directive that would require new studies to undergo political review before being released. Trump’s staffing of the Environmental Protection Agency—he has nominated Scott Pruitt, the Oklahoma Attorney General and a climate skeptic, to lead the agency, and has assigned advisers critical of environmental regulation to the E.P.A. transition team—suggests that he plans to make good on his campaign threat to “get rid of it in almost every form.” (Pruitt is expected to be confirmed as the E.P.A. administrator soon.) Meanwhile, a memo leaked to the press indicates that Trump has imposed a gag order on E.P.A. employees, preventing them from speaking with journalists, posting on social media, or sending out news releases. Past Presidents, including Barack Obama, have issued similar orders, but theirs tended to be limited in scope. Trump’s is comprehensive—much like Harper’s.

The muzzling of Canadian scientists coincided with a critical moment in Stirling’s work. Owing to a canny public-relations campaign by environmentalists in the United States, who hoped to pressure the Bush Administration into action on global warming, polar bears had suddenly become the poster children for climate catastrophe. (In May, 2007, the late celebrity cub Knut was even Photoshopped onto the cover of Vanity Fair, alongside Leonardo DiCaprio in crampons on an ice sheet.) Now, instead of chatting genially with a science reporter about, say, the effects of forest fires on polar-bear maternity, Stirling was obliged to give his would-be interviewer an 800 number for a communications officer in Ottawa, who would ask the journalist to submit questions. The press liaison would then send those questions to Stirling, who would write down his answers and send them back to Ottawa, to be relayed once again to the reporter. The process could take weeks, and often the liaison—someone with “no knowledge whatsoever about the field,” Stirling said—would nix certain answers. “That was just indefensible,” he told me.

Bearded, grandfatherly, and occasionally photographed cradling baby polar bears in his arms, Stirling is hardly the sort of person whose statements would typically invite attention at the ministerial level. Yet, in the Harper era, any research connected with human-caused climate change—melting ice in the Arctic, for instance—attracted particular scrutiny. “They didn’t like polar bears because the situation with them is so simple and straightforward,” Stirling said. “Even when I go to elementary schools, the kids understand that polar bears need ice to walk around on.” Several colleagues in the federal government were assigned media minders when they attended academic conferences. “That’s the sort of thing that should never happen in a democratic country,” he said. “I had seen this kind of thing before, in the seventies, when Russian scientists were in Canada with K.G.B. guys standing in the back of the room, scowling.” After thirty-seven years studying polar bears and ice-breeding seals on behalf of the Canadian Wildlife Service, Stirling felt philosophically out of step with the new government. In July, 2007, shortly before his sixty-sixth birthday, he retired. Since then, he has continued to make trips to the Arctic and to publish papers from his perch as an adjunct professor at the University of Alberta.

The Harper government’s paranoia, however, went beyond climate change. According to a study conducted in 2013 by the Professional Institute of the Public Service of Canada, one of the country’s largest labor unions, thirty-seven per cent of Canadian federal scientists, working in diverse fields, said that they had been “prevented in the past five years from responding to questions from the public and media.” Kristi Miller-Saunders, a twenty-five-year veteran of Fisheries and Oceans Canada, where she is the head of molecular genetics, got caught in Harper’s crosshairs when her data suggested that an infectious disease might be undermining performance in wild salmon. At a judicial inquiry in British Columbia, in 2011, she told me, “The government sent me in with a security officer—a bodyguard—because they wanted to keep the media from me. I wasn’t allowed to come in the main doors.” There was concern, Miller-Saunders said, that the public might attribute the sickness she had pinpointed to salmon farming, a major industry in Canada, even though her paper contained no mention of aquaculture. Rather ironically, she said, the government’s attempt at censorship “generated more interest” than the data warranted.

The Canadian scientists I spoke with were careful to point out that the Harper government never interfered with their research in the way that the Trump Administration seems to be planning to do with the E.P.A. Harper did, however, energetically defund and suppress federal ecological research, and he scrapped many environmental regulations that he thought might impede growth in the oil and gas industries. Thousands of government scientists lost their jobs as a result. At the same time, there was a marked drop in coverage of scientific news generally, and an eighty-per-cent decrease in climate-change coverage in particular, according to a government report released in 2010. “When you silence an organization, what they are doing is out of the public eye,” Miller-Saunders said. “People conclude there’s not good science going on. Once you lose credibility, it’s easy to go and cut programs.”

Ultimately, the media crackdown and subsequent gutting of programs led to a brain drain. “We lost brilliant people who went to other countries to do their work,” May said. Thomas Pedersen, the chair of the Canadian Climate Forum, told me that he has already been approached by one senior American scientist who is considering leaving the United States for Canada. “Why would you want to be slowed down by some bureaucratic wrangle that is a result of perverse, anti-science ideology?” he said. “It’s usually the crème de la crème of scientists who will say, ‘I don’t need to put up with this stuff.’ ”

In the United States, the spectre of a brain drain was recently made more real by the Trump Administration’s de-facto ban on immigration from seven Muslim-majority countries, which will obstruct the flow of, and appeal for, talented scientists and students from abroad. Visas issued to people in the affected countries were cancelled by the State Department after Trump’s executive order, which has been temporarily stayed by a federal judge in Seattle and is the focus of a fierce legal battle likely to reach the Supreme Court. It is doubtful that any international science organizations would risk holding a conference here now, or that the affected visa holders will feel comfortable attending professional events or visiting family outside the country, lest they be barred from reëntering. Last week, a photograph of a doctor named Mazin Khalid went viral. Khalid, who went to medical school in Sudan, is shown in a linoleum-floored corridor at Brooklyn’s Interfaith Medical Center, holding a sign that reads, “I am taking care of your mom . . . but I can’t go see mine.”

If the Canadian experience can teach U.S. scientists anything, it’s that not only their future research but also their past work is at risk. “Watch your libraries,” May said. “Stuff was taken away in dumpsters. Raw data and archives were lost.” There is enough collective anxiety about U.S. climate data being destroyed, altered, or lost that several groups of concerned citizens spent the months before Trump’s Inauguration copying federal data and moving it to other servers. “Within weeks of Harper becoming Canada’s Prime Minster, the climate-change information was scrubbed from the Web site of Environment Canada and researchers were muzzled,” May said. “That took weeks. Trump is a lot faster.”

By Rachel B. Doyle