Chicago isn't exactly known for having mild, snowless winters. The city is prone to frequent Arctic outbreaks with temperatures plunging below zero Fahrenheit, along with frequent light snowfalls and occasional blizzards...

This year, however, the weather pattern across the U.S. brought a historic reprieve to the most winter-weary Chicago residents. For the first time in 146 years of record-keeping, there was no snow on the ground on any day during January and February.

SEE ALSO: Here’s why it's so frickin’ hot right now

The snowless streak was punctuated by frequent bouts of record warm weather, with numerous daily and monthly records toppling during February in particular.

Chicago's about to do something its never done in 146 years of record keeping: go the entire months of Jan & Feb with no snow on the ground.

We're not the only typically snowy city suffering through (or enjoying depending on your perspective) a snow drought... https://twitter.com/NWSTwinCities/status/836315999486029824 …

Rockford, Illinois also set a record for a snowless January and February, which has never happened there since weather records began in 1905, the Weather Service said. 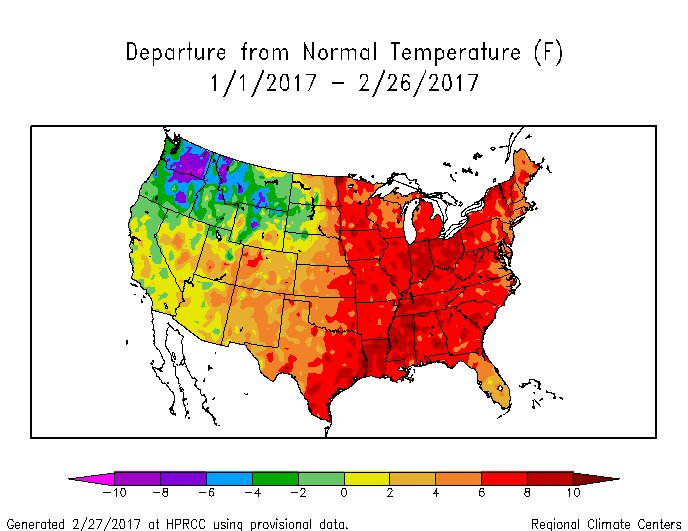 With the last official day of Winter today, folks in the Eastern US have escaped another cold Winter season. Now it's time to welcome Spring

Chicago was far from alone in its freak warmth during what is normally one of the coldest and snowiest winter months. Thousands of warm temperature records were set or tied during February across the eastern two-thirds of the country, with many locations having their warmest February on record.

In Burlington, Vermont, the temperature hit 72 degrees Fahrenheit on Feb. 25, which broke a daily, monthly and seasonal record. The previous record high for any winter month was 68 degrees, set in 2015.

Animation showing the early arrival of spring in the U.S. based on a leaf index. Image: national phenology network

Instead of heavy snow, the Midwest and East Coast have been dealing with rounds of severe thunderstorms, with more outbreaks expected Tuesday and Wednesday. Massachusetts had its first-ever February tornado on Feb. 25, when an EF-1 twister hit the western part of the state. Rare February tornadoes also struck Pennsylvania and Maryland on Saturday.

The spring-like weather and lack of snow cover is causing trees to bloom weeks ahead of schedule, part of a long-term trend favoring the earlier onset of the spring season. This trend, like many temperature and precipitation trends seen in recent years, has been linked to human-caused global warming.