CLIMATE CHANGE BLAMED FOR HALF OF INCREASED FOREST FIRE DANGER... 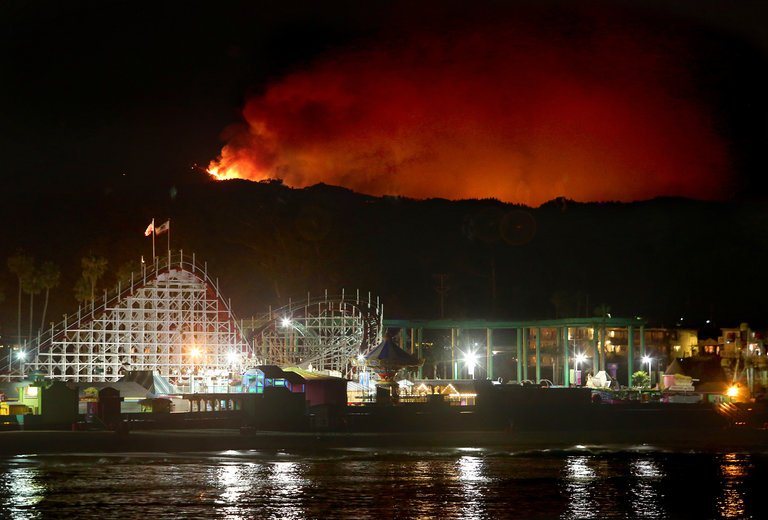 Forest fires are burning longer and stronger across the western United States, lighting up the landscape with alarming frequency. Residents are forced to flee, homes are incinerated, wildlife habitats are destroyed, lives are lost. Last year, the Forest Service spent more than half its annual budget fighting fires...

Scientists have long theorized that climate change has contributed to the longer fire seasons, the growing number and destructiveness of fires and the increasing area of land consumed, though some experts suggest that the current fire phenomenon is not just a result of a changing climate, but also fire-suppressing policies practiced by the government for the last century or more.

In a new study published Monday in Proceedings of the National Academy of Sciences, scientists from the University of Idaho and Columbia University have calculated how much of the increased scope and intensity of Western wildfires can be attributed to human-caused climate change and its effects. They state that, since 1979, climate change is responsible for more than half of the dryness of Western forests and the increased length of the fire season. Since 1984, those factors have enlarged the cumulative forest fire area by 16,000 square miles, about the size of Massachusetts and Connecticut combined, they found.

After Years of Drought, Wildfires Rage in California

How dry conditions, dead trees and a lengthy drought set the stage for one of the worst fire seasons on record. 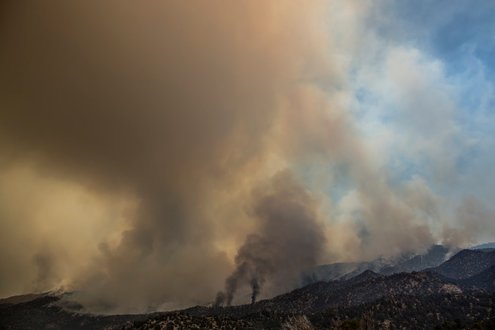 The study uses “fuel aridity,” or dryness of the climate and the forests, as a way to measure the influence of climate change on forest fires. The combination of a long period of drought in the West and hot temperatures have caused trees and undergrowth to become particularly tinderlike. Warmer air can draw more moisture, in general, from trees and plants, turning them into kindling.

The scientists used the dryness of the climate to determine the dryness of the forests themselves, using eight metrics that corresponded with fuel dryness and fire danger, said A. Park Williams, one of the study’s authors and an assistant research professor at Columbia’s Lamont-Doherty Earth Observatory.

The authors found that fuel aridity in a given year has a direct relationship with the forest fire area, and that climate change accounts for 55 percent of the increased aridity from 1979 to 2015. Cyclical climate variations would have dried out the landscape some, but human-caused climate change on top of those patterns caused this drying process to double.

Dr. Williams said that those variations were also affected by patterns in the Pacific Ocean, which alternate between cooler, wetter periods and hotter, drier ones and also contribute to the drier landscape and a longer fire season, according to the study. In the beginning of the period examined in the study, 1948 to 2015, the West was in a cool, wet period, but has since shifted to a hot, dry period.

Dr. Williams also stressed the exponential relationship between fuel aridity and the wildfire area: Every degree that temperatures warm has a much bigger effect on the fire area than the previous degree did.

He also said that this pattern — longer fire seasons, more burned acres of forest — is likely to continue as long as there is enough fuel to burn, but that there will come a point, probably in the middle of the century, when there are not enough trees left to sustain wildfires.

Some human activity — such as fire suppression, land development and fire ignitions — is thought to have also contributed to the wildfire problem, and Dr. Williams said that prescribed fires might be able to help slow the rapacious appetite of Western wildfires, but the effect of these factors on aridity was not included in the study.

The study notes — but does not include — the effects of other phenomena that may be associated with human-caused climate change, such as more frequent lightning strikes, the growth and spread of beetle populations that kill Western pines as a result of climate change, and the reduced snowpack in Western mountain ranges.

Wildfires also release carbon dioxide, one of the main drivers of climate change, and reduce the number of trees available to absorb carbon dioxide, a double whammy for the atmosphere.

“People tell me that they’ve never seen fires as active as what they’re battling right now,” Dr. Williams said. “What we’re seeing in fire world is much different than what we saw in the 1980s, and in the 2030s, fires will be unrecognizable to what we’re seeing now.”