CLIMATE CHANGE COULD BE EVEN WORSE FOR BOSTON THAN PREVIOUSLY THOUGHT... 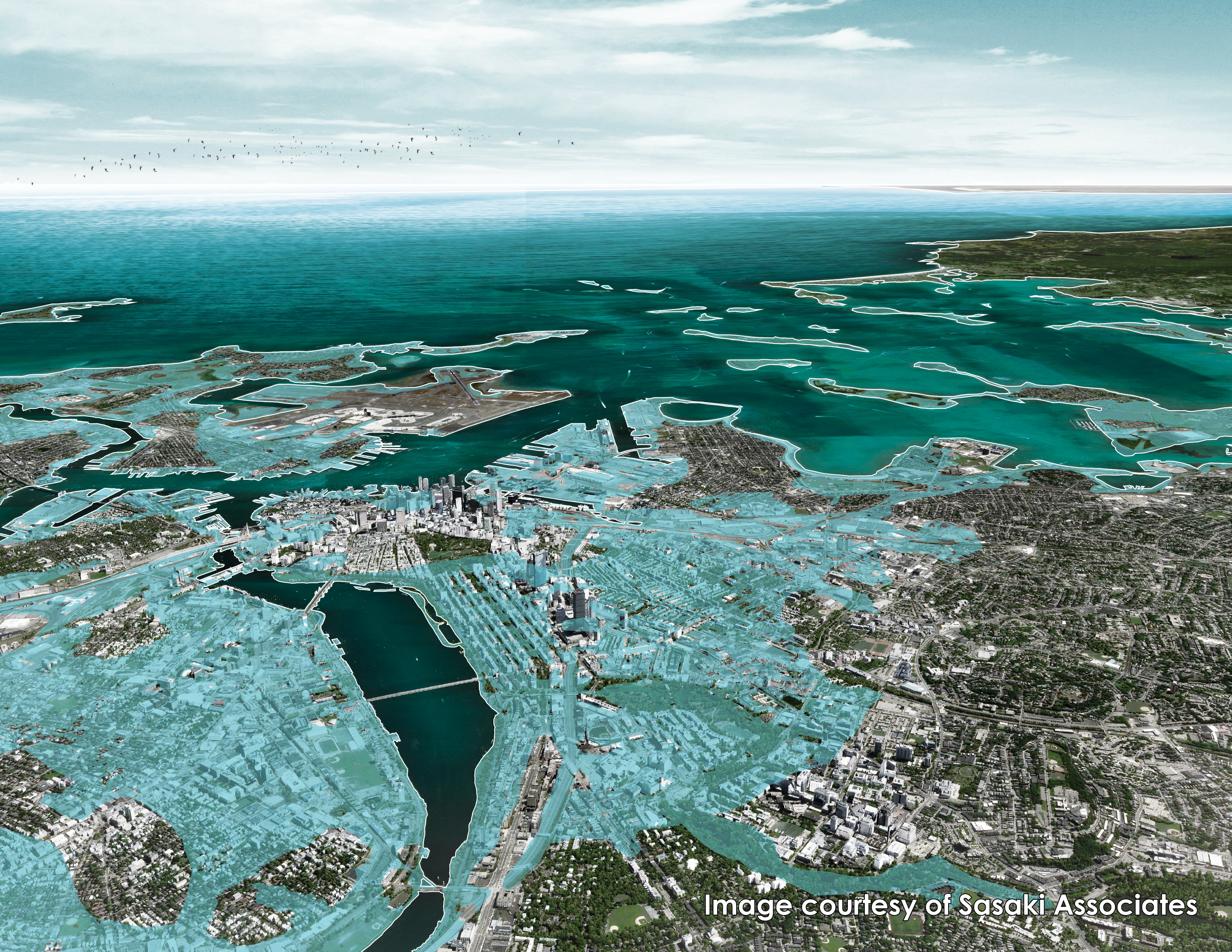 The consequences of climate change on Boston are expected to be far more calamitous than previous studies have suggested, a new report commissioned by the city says...

In the worst-case scenario, sea levels could rise more than 10 feet by the end of the century — nearly twice what was previously predicted — plunging about 30 percent of Boston under water. Temperatures in 2070 could exceed 90 degrees for 90 days a year, compared with an average of 11 days now.

And changes in precipitation could mean a 50 percent decline in annual snowfall, punctuated by more frequent heavy storms such as nor’easters.

The report, by scientists from the University of Massachusetts and other local universities, has raised concerns in City Hall just two weeks after Mayor Martin J. Walsh attended a climate summit in Beijing.

“The updated climate projections confirm that we must work together to take bold approaches to prepare Boston for the impacts of climate change,” Walsh said in a statement.

The report, he said, is part of the city’s effort to assess its vulnerability and to seek solutions. Next year, Boston will host the same climate conference that Walsh attended, with leaders from some 60 US and Chinese cities.

“We take climate change seriously, because we take the health and resilience of our city seriously,” Walsh said. “We will continue to focus on using the best data to inform decisions and understand future investments.”

The updated projections for Boston take into account new research that suggests the accelerating melt of the ice sheets covering Antarctica will have a disproportionate impact on cities along the East Coast.

As ice melts on the South Pole, the resulting gravitational pull on the ocean, as well as the gradual sinking of land in the Northeast, means that Boston and other nearby communities are likely to experience about 25 percent higher increase of sea levels than other parts of the planet, according to the new research.

“Boston is a bull’s-eye for more sea level damage,” said Rob DeConto, a climate scientist at UMass Amherst who helped develop the new Antarctica research and who co-wrote the new Boston report. “We have a lot to fear from Antarctica.”

If high levels of greenhouse gases continue to be released into the atmosphere, the seas around Boston could rise as much as 10.5 feet by 2100 and 37 feet by 2200, according to the report.

Even under optimistic forecasts that factor in significant cuts to carbon emissions, sea levels are projected to rise as much as 6 feet by 2100 and nearly 12 feet by 2200.

Such a dramatic rise would be devastating to Boston. Faneuil Hall, for example, now floods at 5 feet and Copley Square at 7.5 feet above today’s high tides, city officials say.

“If seas rise that much, the New England coastline would look very different from space,” said DeConto, referring to the worst-case scenarios. “There would be huge impacts on our ecosystems, and we would be talking about a managed retreat from the coastline rather than engineering a way to harden our coastline.”

The most comprehensive previous projection of the impact of climate change on Boston was released two years ago in a report by the federal government called the National Climate Assessment.

CANALS PROPOSED FOR BOSTON IN RESPONSE TO RISING SEA LEVELS...(VIDEO)

That report found that the Northeast was already bearing the brunt of climate change, with prolonged heat waves, torrential rains, and increased flooding, which it attributed to the burning of fossil fuels and other human activity.

It noted that over the past century average temperatures in Northeastern states have risen by 2 degrees Fahrenheit. It also found that the region’s precipitation has risen by more than 10 percent, while the worst storms have brought significantly more precipitation.

But the federal report forecast that seas would rise, under the worst case, between 3 and 6 feet by 2100 and projected that the southern states in the Northeast, by mid-century, would experience about 60 additional days per year of temperatures above 90 degrees.

“In a word, this is awful,” she said of the new projections. “It’s so stark it’s hard to wrap one’s head around.”

She noted that the increased storm surge and high tides could bring significant damage and flooding to the city far sooner than the end of the century, just as Tropical Storm Sandy devastated parts of coastal New Jersey and New York in 2012.

“We will need to come together to prevent Boston’s people and places from flooding where we can, and learn to live with more water where we can’t,” she said.

On the bright side, Carl Spector, commissioner of the city’s Environment Department, said the worst scenarios remain unlikely and a historic agreement reached last year in Paris offered hope that nations around the world could work together to reduce emissions.

But he said the new data about Boston underscore why the city has to consider taking action in the coming years to build barriers and other defenses against the rising seas, revise its building codes, and find other ways to adapt to the changing climate.

“We know even relatively small amounts of sea level rise affect us,” he said. “All the models we’re seeing are concerning.”