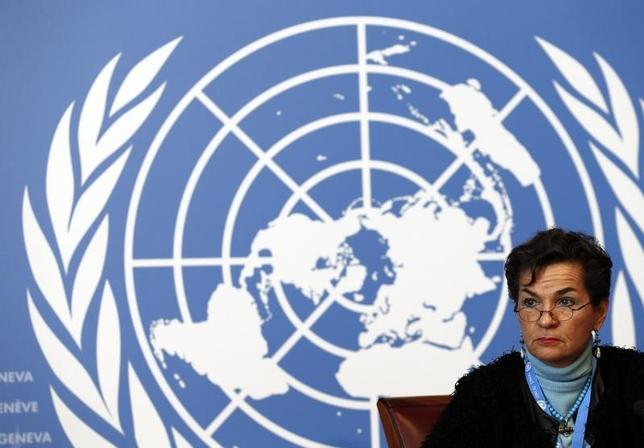 Christiana Figueres, Executive Secretary of the United Nations Framework Convention on Climate Change (UNFCCC), listens during a news conference after a week long preparatory meeting at the U.N. in Geneva February 13, 2015.
Reuters/Denis Balibouse

A climate change deal to be agreed in Paris in December will not be able to come up with a global carbon price, the United Nations' climate chief, Christiana Figueres, said on Tuesday.

Big multinational companies and investors, and most recently oil majors, have called for a global carbon price to help spur investments in low-carbon energy.

A global carbon price would help to create an incentive for operators of power plants and factories to switch to cleaner fuels such as gas or to buy more energy-efficient equipment.

When the European Union launched a carbon trading scheme in 2005 there were expectations this would eventually lead to a global carbon scheme by 2020 worth around $2 trillion.

But the difficulties of bringing together different carbon schemes from countries around the world means the goal of a global carbon price remains elusive.

"(Many have said) we need a carbon price and (investment) would be so much easier with a carbon price, but life is much more complex than that," Figueres told a climate investor event in London.

"I agree it would be more simple ... but it's not quite what we will have," she said, adding that the world would move towards that in the future.

Figueres said 60 jurisdictions around the world already have a carbon price or carbon pricing mechanism such as a tax.

"I would argue we already have a strong carbon price signal," she said.

Countries are due to meet in Paris from November 30 to December 11 to agree on a global deal to cut greenhouse gas emissions and tackle climate change.

This month, the leaders of 10 companies that produce 20 percent of the world's oil and gas recognized that current greenhouse gas levels were inconsistent with a goal of limiting global warming to 2 degrees Celsius over pre-industrial times. But they stopped short of outlining goals to cut their own emissions.

(This version of the story corrects October 27th story to read 60, paragraph 8)