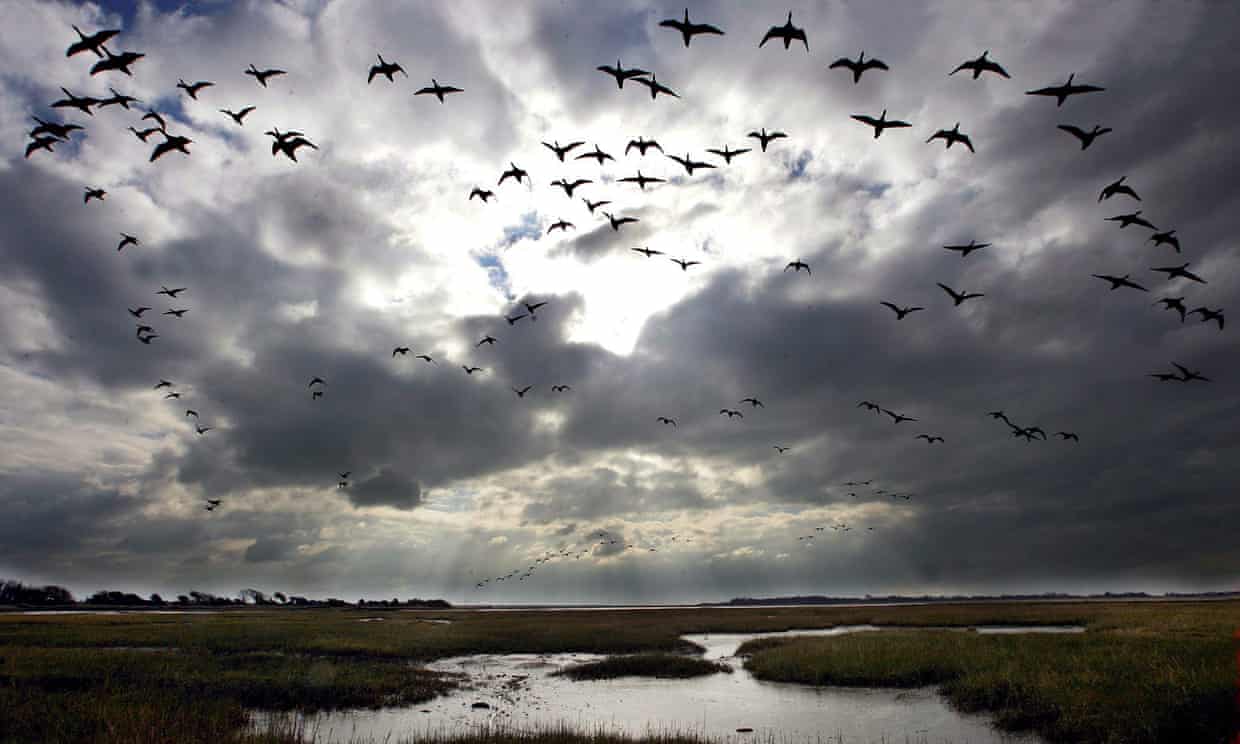 Birds with long migrations are expected to suffer most, as other species reach breeding grounds before them. Photograph: Gerry Penny/EPA

A University of Edinburgh study finds birds are arriving at breeding grounds too soon, causing some to miss out on food...

Migrating birds are responding to the effects of climate change by arriving at their breeding grounds earlier as global temperatures rise, research has found.

The University of Edinburgh study, which looked at hundreds of species across five continents, found that birds are reaching their summer breeding grounds on average about one day earlier per degree of increasing global temperature.

The main reason birds take flight is changing seasonal temperatures and food availability. The time they reach their summer breeding grounds is significant, because arriving at the wrong time, even by a few days, may cause them to miss out on vital resources such as food and nesting places. This in turn affects the timing of offspring hatching and their chances of survival.

Editorial: Warmer winters may seem good for Arctic animals. In fact they can be deadly...

The Guardian view on climate change: bad for the Arctic...

The research included species that travel huge distances, such as the swallow and pied flycatcher, as well as those with shorter migrations, such as the lapwing and pied wagtail. British swallows fly through western France, across the Pyrenees, down eastern Spain into Morocco, and across the Sahara, to spend their winter in South Africa from around September or October.

Migrating swallows can cover 200 miles a day at speeds of 17-22 miles per hour, with a maximum flight speed of 35mph.

The pied flycatcher, a bird slightly smaller than a house sparrow, is a summer visitor to the UK and breeds mainly in western areas of the country, before spending the winter in west Africa.

The northern lapwing, which is about 30cm long from beak to tail, can be seen across the British Isles throughout the year, favouring farmland, wetland and meadows during the breeding season and pasture and ploughed fields during the winter months.

The University of Edinburgh researchers examined records of migrating bird species dating back almost 300 years. They drew upon records from amateur enthusiasts and scientists, including notes from 19th-century American naturalist Henry David Thoreau.

They hope their study, published in the Journal of Animal Ecology and supported by the Natural Environment Research Council, will help scientists better predict how different species will respond to environmental changes. Long-distance migrants, which are shown to be less responsive to rising temperatures, may suffer most as other birds gain advantage by arriving at breeding grounds ahead of them.

Takuji Usui, of the university’s school of biological sciences, said: “Many plant and animal species are altering the timing of activities associated with the start of spring, such as flowering and breeding.

“Now we have detailed insights into how the timing of migration is changing and how this change varies across species. These insights may help us predict how well migratory birds keep up with changing conditions on their breeding grounds.”