CLIMATE CHANGE IS CHANGING NATURE SO MUCH IT MAY NEED ‘HUMAN-ASSISTED EVOLUTION’, SCIENTISTS SAY...

Climate change: It's ‘game over’ for planet earth...

Life on Earth has already been fundamentally altered by global warming, affecting the genes of plants and animals and altering every ecosystem on the planet, according to a major review of the scientific literature...

A paper in the leading journal Science warned the changes were so dramatic – and potentially dangerous – that scientists might be forced to intervene in some cases to create “human-assisted evolution”.

One of the main concerns about climate change is it will seriously damage food production, particularly in places prone to flooding and drought, leading to mass famines and the forced migration of climate refugees.

The researchers found that 82 per cent of the natural ecological processes that support healthy ecosystems on land and sea had been affected in a way that had not been expected “for decades”.

The average global temperature has risen by one degree Celsius since the 1880s, as humans have pumped greenhouse gases from fossil fuels into the atmosphere.

The researchers said this had “already had broad and worrying impacts on natural systems, with accumulating consequences for people”. 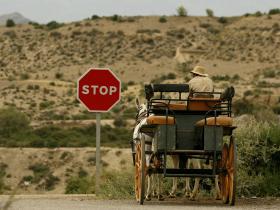 Global warming to turn parts of Europe into desert by end of the century, report warns...

“Minimising the impacts of climate change on core ecological processes must now be a key policy priority for all nations,” they wrote in the paper.

“It is now up to national governments to make good on the promises they made in Paris [at last year's climate summit] through regular tightening of emission targets, and also to recognise the importance of healthy ecosystems in times of unprecedented change.

“Time is running out for a globally synchronised response to climate change that integrates adequate protection of biodiversity and ecosystem services.”

Many species are shifting towards the poles as the world has warms, while others are seeking higher ground.

Other creatures are changing shape, with many getting smaller as a higher surface-area-to-body-mass ratio makes it easier to stay cool.

For example, six species of woodland salamander in the Appalachian Mountains have undergone an average eight per cent reduction in body size over the past 50 years.

Slightly smaller lizards might not sound like something to overly concern humans, but there is evidence this response is also affecting important sources of food.

“Some fish species appear to be shrinking, but attributing this solely to ocean warming is difficult because size-dependent responses can be triggered by commercial fishing as well as long-term climate change,” the researchers wrote.

“However, long-term trend analyses show convincingly that eight commercial fish species in the North Sea underwent simultaneous reductions in body size over a 40-year period because of ocean warming, resulting in 23 per cent lower yields.”

Changes are also taking place on a much bigger scale.

In Alaska, the researchers said “wholesale biome shifts” had been observed with the “tundra … transitioning to boreal conditions”.

“These are clear signs of large-scale ecosystem change and disruption, in which disequilibrium rapidly pushes the system into a new state,” they wrote.

And such ecological regime shifts can have dire results.

“For example, some reefs are transitioning from coral- to algal-dominated states as a consequence of mass coral mortality, whereas kelp forests are turning into rocky barrens in temperate seas,” the researchers said.

“In lakes, climate change has increased the risk of regime shifts from clear-water to turbid states and increased the occurrence of cyanobacteria blooms.”

All this turmoil is likely to be too much for some forms of life. For example, some trees do not reproduce fast enough to shift their range uphill to escape the warming climate.

‘Dangerous’ climate change could arrive as early as 2050 or earlier...

The researchers suggested humans might have to step in to help nature.

“One such strategy is to use assisted gene flow, the managed movement of individuals or gametes between populations to mitigate local maladaptation in the short and long term,” the researchers said.

“Human-assisted evolution may … be a key strategy in maintaining reef dependent fisheries by accelerating and enhancing the stress tolerance of corals.”

The researchers pointed to declines in the yields of significant food crops, such as rich, maize and coffee, “in response to the combined effects of rising temperatures and increasing precipitation variability over past decades”.

“Genetics is being used to counteract decreasing yields in some key crops such as wheat (for which, globally, yields have declined by six per cent since the early 1980s) through crossing domesticated crops with wild relatives to maintain the evolutionary potential of varieties,” they wrote.

“Yet, some important wild strains are also showing signs of impact from climate change.

“Losing genetic resources in nature may undermine future development of novel crop varieties and compromise key strategies that humans use to adapt to climate change.”

Plagues of insect pests are also a growing problem, particularly in the forests of North America.

“Several native insect species from North America, with no prior records of severe infestation, have recently emerged as severe pathogens of forest resources because of changes in population dynamics,” the researchers said.

“These include the Aspen leaf miner, the leafblotch miner, and the Janet’s looper, which have decimated millions of hectares of aspen, willows, and spruce-fir forests since the early 1990s.

“Known pests such as mountain and southern pine beetles and spruce beetles have recently expanded their distribution and infestation intensity on commercially important pine and spruce trees.

“These outbreaks may increase in the future because hundreds of plant pest and pathogen species have shifted their distributions 2 to 3.5km per year pole-ward since the 1960s.”

And humans should take note, as mosquitoes that carry diseases like malaria, Zika and dengue are also on the move.

One of the researchers, Professor James Watson, of Queensland University, said: “Some people didn't expect this level of change for decades.

“The impacts of climate change are being felt everywhere, with no ecosystem on Earth being spared. It is no longer sensible to consider climate change as a concern only for the future.

“Emissions targets must be actively achieved and time is running out for a synchronised global response to climate change that safeguards biodiversity and ecosystem services."