CLIMATE CHANGE IS HERE: INSIDE THE SUMMER OF HELL AND HIGH WATER...

With a catastrophic season of wildfires, megafloods and major hurricanes, the climate-change siege is fully upon us...

Southern California was ready to burn. El Niño rains that topped off reservoirs in the north of the state barely drizzled down south, leaving the region in a worst-in-centuries drought. By June, tree die-off in state forests, accelerated by bark beetles feasting on dry pines, had more than doubled from 2015, topping 66 million. Record heat – 122 degrees in Palm Springs – pushed the extreme fire conditions typical of September and October into midsummer. So when sparks hit the ground in August, fires across the state literally exploded. "It's almost like the mountains are just doused in gasoline," said one fire captain.

What Megablazes Tell Us About Climate Change

Pervasive drought and record temperatures have turned forests from Fresno to Fairbanks into tinderboxes. And it's only getting worse

In the mountains above San Bernardino, the Blue Cut Fire consumed 30,000 acres in a single day, jumping an eight-lane interstate, spawning fire tornadoes and erecting a wall of flame nearly 90 feet tall. "It moved with an intensity and a ferocity that veteran firefighters haven't seen before," said San Bernardino County fire chief Mark Hartwig. The inferno forced the evacuation of 82,000 residents in less than 12 hours, many riding out on fire engines. Before a merciful break in the winds allowed firefighters to gain the upper hand, the Blue Cut destroyed more than 300 homes and buildings. Up the coast, firefighters battled the 46,000-acre Chimney Fire, narrowly saving the Hearst Castle – the extravagant mansion that inspired Xanadu in Citizen Kane.

As California was gripped by fire, the hottest August in recorded history unleashed extreme weather events in every corner of the United States. Hawaii braced for an unprecedented "double hurricane," back-to-back systems that barreled down on the Big Island before passing just offshore. Then Hermine, the first hurricane to hit the Florida capital of Tallahassee since 1985, sent tropical-storm warnings north into New England.

In Louisiana, an unnamed superstorm – a windless hurricane – dumped up to 30 inches of rain, killing at least 13 people and inundating more than 60,000 homes in dozens of parishes. A "weather autopsy" led by scientists at the National Oceanic and Atmospheric Administration linked the superstorm to climate change. The lead author, NOAA scientist Karin van der Wiel, said "human-caused, heat-trapping greenhouse gases" had likely produced "a near doubling of the odds of such a storm." 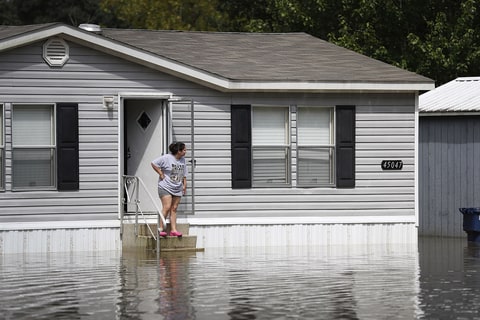 It may seem far-fetched that global warming is producing both megafires and superstorms. But climate scientists say the same thermodynamics are driving both disasters. Simply put, a hotter atmosphere demands more water. In the drought-prone West, it sucks soils, shrubs and trees bone-dry – setting the stage for fire. A 2015 Columbia University study found California's drought was up to 25 percent more severe due to global warming.

In a wet environment like the coastal South, the atmosphere can become supersaturated. As the world has warmed, extreme rain events have spiked in the Southeast, making a mockery of traditional storm-risk metrics. The Louisiana superstorm was the second "one-in-1,000-year" rainfall event to hit the state this year alone. In South Carolina, another one-in-1,000-year event dropped 26 inches of rain last October.

Despite their Old Testament scale, these weren't "acts of God," nor were they "natural disasters" – not strictly speaking, not anymore. We all had a hand in this destruction. "Unfortunately, this is just the start," says David Titley, a retired rear admiral with a doctorate in meteorology who spearheaded the Navy's Task Force on Climate Change. "We have seen the fires, the intense rainfall events time and time again – just in the United States, let alone the rest of the world." If we fail to take decisive action, Titley says, we will "make this worse and worse and worse." The only question, he says, is "How many times are we going to get punched in the gut?"

As fiery as 2016 has already been, California is only now entering peak season, when firestorms get whipped by the Santa Ana winds. Across the West, the fire season now lasts 105 days longer than it did in 1970. Big fire has hit the Northern Rockies hard, with a tenfold increase in major blazes on Forest Service land in Wyoming, Montana and Idaho. Indeed, Idaho was battling the largest blaze in the nation this summer: The Pioneer Fire, spanning nearly 200,000 acres in the remote Boise National Forest, defied containment with "extreme fire behavior."

The science connecting wildfire to global warming is unequivocal. A 2016 report from the National Academy of Sciences states plainly, "An increase in fire risk in California is attributable to climate change." If emissions continue unchecked, an earlier report found, days of extreme-fire risk in California are projected to increase by a factor of six by the end of the century. "We're looking at potential holocausts of fire that are unlike anything we have now," says Char Miller, a professor of environmental analysis at Pomona College. "And we're pretty shocked now."

California has had to confront the perils of climate change and fire more than anywhere else; its massive population has built out into lands that were already prone to burning. "That means you have more people that you have to defend in a landscape that's becoming less defensible," says Miller. "There are 20 million people around the Angeles National Forest. What if your capacity to protect it is limited because the natural system is a tinderbox?"

In response, California is making massive investments in its fire defenses. Gov. Jerry Brown stood on the site of the Rocky Fire that charred nearly 70,000 acres north of Napa in 2015 and warned that climate-aggravated wildfire is a "new normal." Brown has budgeted hundreds of millions of dollars for additional firefighting resources – more than $200 million in 2016 alone – allowing the state to hire more full-time firefighters and bring on more seasonal hands earlier in the year.

But even these investments may not be enough to prevent an "apocalyptic" fire, Miller warns. "If you're living in a fire system that is fueled by drought, fueled by a warming and drying planet," he says, "there's a moment at which the fire's just gonna take off – without our being able to control it."

The world witnessed this kind of calamity at a different latitude of the North American West this past spring when an explosive wildfire in Alberta, Canada, devastated the city of Fort McMurray – epicenter of that country's tar-sands oil extraction. The region had experienced a warm winter and under 40 percent of average precipitation. About 1.5 million acres (an area larger than Delaware) were scorched, destroying 2,400 structures and causing almost $3 billion in damages, the most expensive "natural" disaster in Canada's history. 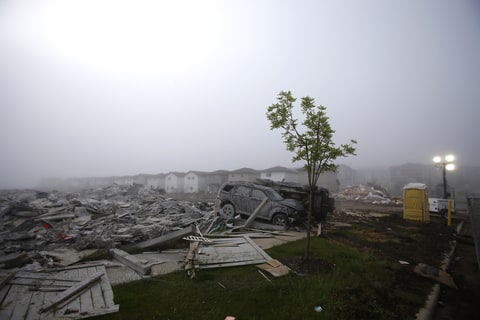 The aftermath of this year's Alberta wildfires. Cole Burston/Getty

Boreal forests below the Arctic Circle are now burning at a rate not seen in at least 10,000 years. Mike Flannigan, a professor of wildland fire at the University of Alberta, calls the Fort McMurray blaze "consistent" with what we expect in an age of global warming. "A warmer world has more fire," he says. "We're going to see more and more of these."

In the aftermath of the Louisiana superstorm, Donald Trump flew in for a photo-op; cameras captured him unloading a shipment of Play-Doh for flood survivors. The Republican nominee has staked out wildly inconsistent stances on issues from immigration to taxes, but has firmly denied the threat of global warming, which he has blasted in tweets as "bullshit" and a "hoax." In an interview on CNN last September, Trump insisted flatly, "I don't believe in climate change."

Trump vows to "cancel" the Paris Climate Agreement, to "rescind" the Obama administration's Climate Action Plan, to "save the coal industry" and "to ask TransCanada to renew its permit application for the Keystone Pipeline." As for the EPA? "We are going to get rid of it in almost every form," he has said. "We're going to have little tidbits left."

In perhaps the sharpest issue contrast of the presidential race, Hillary Clinton calls climate change a "defining challenge of our time." She has outlined an agenda to slash carbon emissions by 80 percent by 2050 and vowed to make the United States "the world's clean-energy superpower," starting with a campaign to install half a billion solar panels. Clinton's plans focus on empowering states and cities, reflecting the reality that Republicans in Congress have gridlocked climate legislation on the Hill as formidably as they've stymied gun control.

Moving away from carbon isn't cheap. But neither is the foot-dragging status quo. The cost of climate-amplified catastrophes is increasingly borne by taxpayers, who fund FEMA's emergency response and the huge relief packages hurried through Congress. "It comes down to billions and even trillions of dollars, and many, many lives lost," Titley says. "That's a carbon tax." Inaction, he adds, is suicide. "Think of climate change as an escalator going out of a subway system," he says. "We're about on the second step of that long tunnel going up."

The Point of No Return: Climate Change Nightmares Are Here