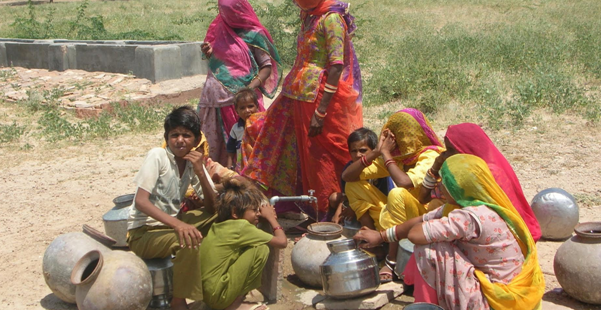 In three short months during monsoon season, India historically receives 75 percent of their annual precipitation. Imagine awaiting this promised, bountiful rainfall and receiving 14 percent less than average. This is what happened in 2015 – and it compounded decades of drought. India is suffering a water scarcity crisis but, until recently, most people believed that over pumping groundwater was the number one reason behind it. Now, a new study published by the Indian Institute of Technology (IIT) Gandhinagar in Nature Geoscience, shows that variable monsoon precipitation, linked to climate change, is likely the key reason for declining levels of groundwater.

India’s rainfall has decreased since the 1950s. When rainfall decreases, so does the water table. By observing climate patterns and well depths, researchers found that groundwater storage dropped in northern India about two centimeters per year between 2002 and 2013. Today, groundwater irrigates over half of India’s crops, but aquifer levels are falling, threatening both water and food security.

“We find that climate has much bigger impacts on groundwater resources than we previously thought,” said Dr. Yoshihide Wada, contributing author to the study, senior researcher at IIASA’s Water Program and research scientist at NASA. When groundwater is pumped, it can take years to replenish. In the throes of record-breaking drought, India feels that loss. 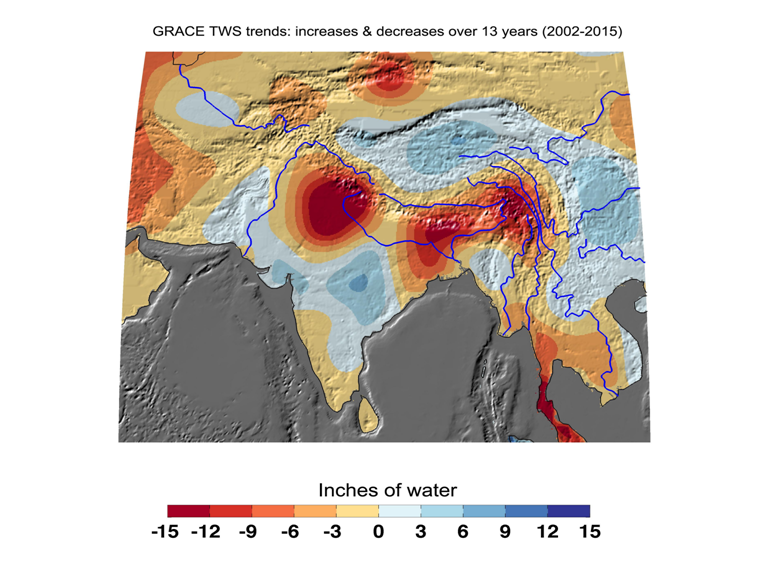 India’s groundwater problem is detectable from space. From 2002-2013, a satellite from NASA mapped aquifers around the world. The Gravity Recovery Climate Experiment (GRACE) satellite detects the Earth’s mass below it and uses this data to measure groundwater pumping. GRACE reported that 54 percent of 4,000 measured groundwater wells are declining, some dropping by more than three feet per year.

A warming world has made India’s monsoon season less predictable. During the past century, the Earth warmed 1.5 degrees, largely due to humans’ unprecedented burning of fossil fuels. What appears to be a small change in temperature is causing drastic upheavals in natural patterns. Increased atmospheric temperatures are changing wind currents and causing more frequent and intense storms. In some cases, this is also redistributing rain and intensifying drought.

In India, warmer air over the Indian Ocean has altered the path of monsoons – leaving Indian farmers high and dry the past two years in a row.

There is no singular definition for water scarcity that takes into account the availability, accessibility, and quality of potable water. However, the Falkenmark Indicator (FI) is a popular tool that measures water runoff and population to determine levels of water stress. According to the FI, a country is considered ‘water scarce’ when they have less than 1,000 cubic meters of usable water per person annually. In 2015, analysis using FI categorized India as having ‘absolute scarcity’, with less than 500 cubic meters of water per person annually.

So little water affects security. Last September, protesters set 56 busses on fire in Bengaluru when the Supreme Court ordered that Karnataka must release more water from Cauvery Dam to be used by a bordering state. Retrofitted oil trains deliver millions of liters of water to Lature, a district east of Mumbai. Madhya Pradesh, a state in Central India, deployed armed guards to protect one of its reservoirs after farmers from a neighboring state attempted to steal water last year.

Farmers are on the frontlines of the water crisis with India seeing a serious uptick in farmer suicides. Some estimates put the number of related suicides at 500 in 2015, but the central government only publicly acknowledges that 13 farmers’ suicides were related to water shortages. According to the Government of India, 52 percent of agricultural households were in debt in 2014. Heavy debts have resulted in an exodus of farmers, who are now seeking daily labor in large cities. 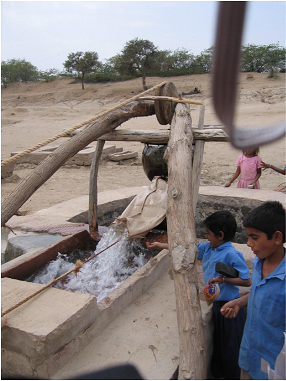 “In spite of the challenges of the agrarian life in India (as with elsewhere) Indian farmers and farming households are some of the most generous that I have ever met,” says Birkenholtz. “They are also innovative; India is full of ‘makers’ – people who see a problem and are determined to find a solution.” Photo from the Marwar region of western Rajasthan, India Courtesy of Trevor Birkenholtz.

“Farmers invest their own borrowed money for sinking bore wells to develop agriculture,” said Secretary R.H. Sawkar of the Secretary, Geological Society of India (GSI). Bore wells are similar to tube wells, long shafts that are drilled into the earth. Electric pumps are used to draw the groundwater through the tube to the surface. Most rural farmers pay a flat fee for unlimited electricity to pump from tube wells, leading to over-pumping.

But farmers don’t have the money, tools, or know-how to drill deeper wells that can access sinking water tables. This creates a serious dilemma in areas where levels drop by almost a meter per year.

“Only rich farmers can effectively pump groundwater from deep aquifers and the urban rich can buy extra water for their luxuries like car washing, [maintaining] lawns near their residence and [using] bottled water for drinking purpose,” said Sawkar.

There are over 20 million tubewells in India today, a technology that enabled the Green Revolution in India. The Green Revolution was a global shift in agricultural production, beginning in the 1930s; it mechanized farming for developing nations and utilized new technologies, like pesticides and genetically modified crops, to feed a booming population. Developing countries could suddenly grow more food on the same amount of land.

When India gained independence in 1947 the central government – along with the Rockefeller and Ford foundations –brought the Green Revolution to India. This meant cultivation of genetically adapted, high-yielding seeds, a deluge of fertilizers, and flood irrigation. Tube-wells proved to be the best way to irrigate more land, since they reached untapped groundwater. But today, annual groundwater pumping removes at least 24 times what was consumed in the 1950s.

“India also inherited Britain’s water policies that were based on water abundance. Any landowner had the right to pump as much groundwater as they wanted… India doubled ag[riculture] productivity between 1972 and 1992 under this system,” said Trevor Birkenholtz, political ecologist at the University of Illinois Urbana-Chapmaign. “In short, there was no groundwater law.”

Laissez-faire pumping is today reflected in the fact that farmers pay a single flat fee for electricity to power tubewell pumps.

The same revolution that once sustained India’s growing population is partly to blame for the cracked and barren landscape that farmers try to cultivate today. According to the World Bank, India’s population tripled since the 1960s, hitting 1.3 billion in 2015. As India continues to battle climate change and overpumping, an equitable distribution for groundwater, if it ever comes, will take considerable intervention.

“This requires strong political will to address this issue, which is lacking,” Sawker said.

Groundwater law and rulemaking falls under the purview of individual states in India. Researchers say that the central government will have a difficult time overcoming this decentralized system, if they wish to establish national water laws. To date very few politicians have fought to limit water pumping.

“No politician wants to be the one that tells farmers – who vote at rates upwards of 85 percent – that they can no longer pump groundwater at current rates,” said Birkenholtz.

It’s more likely that authorities will mandate drip irrigation or restrict the supply of electricity, perhaps through metering, to limit pumping. Using drip irrigation and gaining “more crop per drop” is an efficient alternative to flood irrigation. 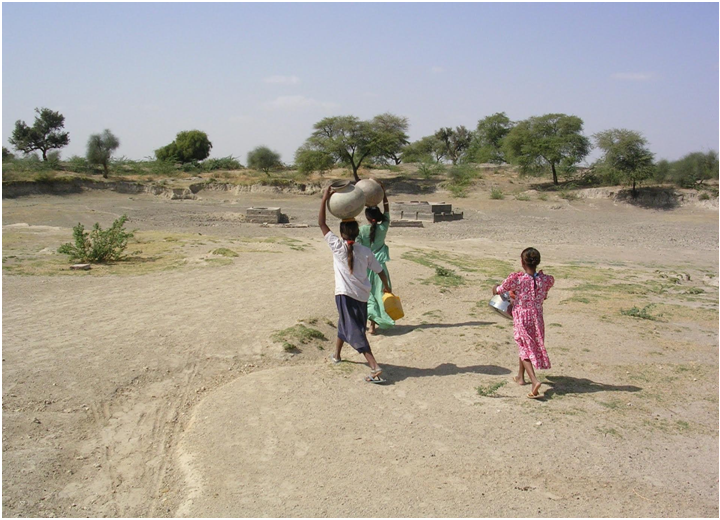 In parts of India like Marwar region depicted above, some village women spend hours each day collecting water. They enlist the help of their female children, who are taken out of school. When a family must choose between education and water, it’s nearly impossible for them to rise above poverty.

“Weather is uncertain by nature, and the impacts of climate change are extremely difficult to predict at a regional level,” explained Wada. “But our research suggests that we must focus more attention on this side of the equation if we want to sustainably manage water resources for the future.”

Today, India accounts for 4.5 percent of global greenhouse gas emissions. Under the Paris Agreement, the country has committed to generating at least 40 percent of its electricity from renewable sources and decreasing carbon emission intensity related to GDP by 33-35 percent by 2030. This means India’s emissions will likely rise, depending on the level of its economic growth.
Citation:
Asoka, A., Gleeson, T., Wada, Y., & Mishra, V. (2017). Relative contribution of monsoon precipitation and pumping to changes in groundwater storage in India. Nature Geoscience.