Ocean oxygen levels have been dropping since the 1980s, according to a new analysis of 50 years of global ocean data. That could spell trouble for marine life...

Ocean oxygen levels have been dropping since the 1980s in a pattern consistent with expectations from global warming, according to a new analysis of 50 years of global ocean data. That could spell trouble for marine life, causing respiratory stress.

The new study disputes the idea that natural fluctuations in temperature could be the cause of the declining oxygen levels. Rather it tends to support existing climate change modelling.

A team of four scientists from the U.S. and Japan analyzed data on dissolved oxygen in the top 1,000 meters of the global ocean since 1958. The data came from the World Ocean Database, the most comprehensive collection of ocean observations. The study, titled “Upper ocean O2 trends: 1958–2015,” appeared in the journal Geophysical Research Letters last month.

“The important aspect of our result is that the rate of global oxygen loss appears to be exceeding the level of nature’s random variability,” the team’s lead scientist, oceanographer Takamitsu Ito of the Georgia Institute of Technology, said in his blog.

“The data are consistent with and strongly suggestive of human-driven warming as a root cause of the oxygen decline. Indeed, there is broad agreement across models that indicates we should expect precipitous declines in dissolved oxygen to become evident about now,” another scientist on the research team, oceanographer Matthew Long of the University Corporation for Atmospheric Research in Boulder, Colorado, told Mongabay.

The study attributes the declining oxygen levels primarily to a combination of changes in ocean circulation, mixing, and biochemical processes, rather than simply to the fact that warmer water holds less oxygen. Ito said the study shows that ocean oxygen levels are decreasing two or three times faster than would be predicted if they were due to warming water alone.

Previous climate change research had predicted the ocean circulation changes highlighted in the new study, warned that ocean oxygen levels could drop by as much as 7 percent by 2100, and showed that deep ocean water masses were already experiencing reduced oxygen levels.

“This side effect of global warming is deeply concerning because it will very likely have profound, disruptive impacts on marine ecosystems, including fisheries,” Long said.

“There is more and more evidence of how the ocean is changing and this is another study demonstrating, clearly showing, that the ocean is changing and the key processes are changing,” said Richard Matear, Senior Research Scientist with the Oceans and Atmosphere unit of Australia’s Commonwealth Scientific and Industrial Research Organisation, who was not involved in the new study.

“The key message from the paper is that the circulation in the ocean is changing,” Matear told Mongabay.

He noted that atmospheric temperatures haven’t gone up as rapidly as expected in the last decade or so in part because more heat than researchers had anticipated is going into the ocean. Particular surface water masses around the world perform key roles in oxygenating underlying water, but if they heat up they become less oxygenated and less dense so they can’t circulate the oxygen deeply.

This loss of oxygen could have dire ecological consequences, and areas with naturally low oxygen levels would be particularly vulnerable. For instance, low oxygen levels in the western North Pacific along the coast of Washington, Oregon, and California could further decline to zero, Matear said, resulting in oceanic dead zones.

“The bigger implication is it’s no longer in the future; it’s happening now,” said Matear.

“It reinforces the idea that the system is changing and we need to think about what we are going to do about it,” he said.

“Consistent with the COP22 agreement we do need to move to a world that has less carbon emissions and the challenge for us is how to do that.”

Editor’s note 6/5/17: This story was updated to include late-breaking comments from Matthew Long. 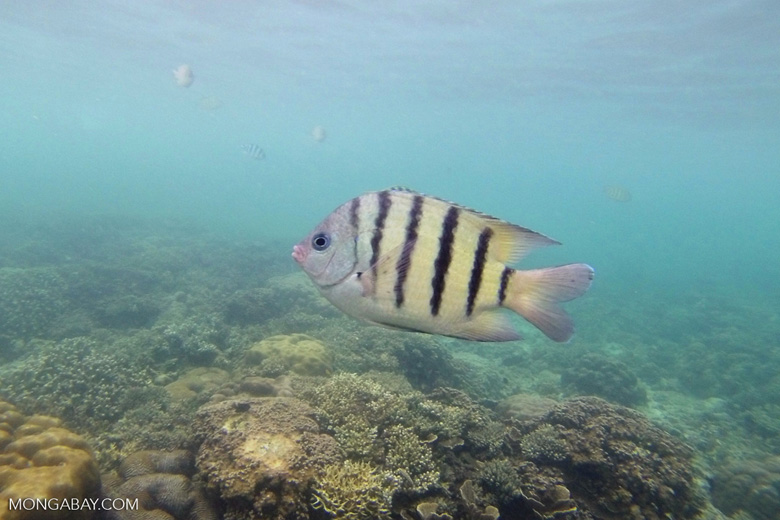 A reef off Sabah, Malaysia. Photo by Rhett A. Butler.