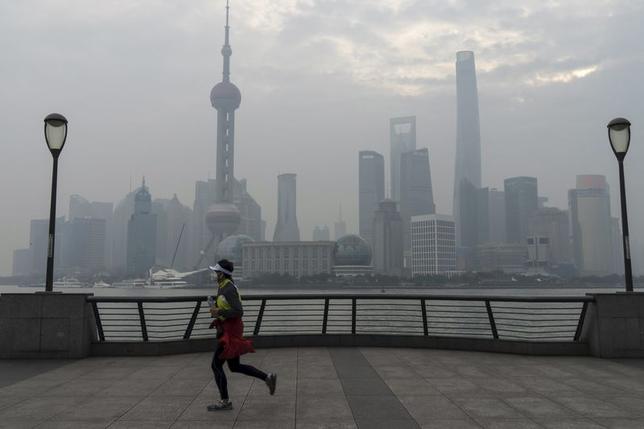 A jogger wearing a mask runs along the bund near the Huangpu river across the Pudong New Financial district, amid heavy smog in Shanghai, China, January 4, 2016.
Reuters/Stringer

BARCELONA (Thomson Reuters Foundation) - The erosion of wealth among the world's middle class due to climate change is a threat to economic and social stability which could spur its 1 billion members to push for action on global warming, Swiss bank UBS Group AG said.

In a study of middle-class consumption in 215 cities around the world, UBS analysts found spending priorities were noticeably different in cities most at risk from climate change such as Los Angeles, Tokyo and Shanghai.

In those top-risk cities, the middle class spent between 0.6 and 0.8 percent more on housing compared to the national average, and less on luxuries, entertainment and durable goods.

The report said middle-class households are already changing their lifestyles in the cities most exposed to hotter temperatures, rising sea levels and extreme weather such as storms and floods.

"More fear, less fun is how we might sum it up," said the study here

In places with high risks of climate-related shocks, people spend more on the upkeep of their properties. And homes may decrease in value if certain places become less appealing to live, eating into wealth, the report said.

Efforts to adapt to changing climate conditions - which remain modest and sporadic among the middle class - can also bring new costs.

In cities that suffer extreme heat, the middle-class is increasingly laying out for air conditioning, the report noted.

But some types of adaptation can create "a negative feedback loop", it warned. For instance, higher demand for air conditioning requires more electricity, which can lead to grid failure and increased planet-warming emissions.

In addition, inadequate infrastructure and health care systems increase the need to rely on emergency government support when disasters strike. "In our assessment this is likely, even in the richest of countries," the report said.

The largest cities are home to nearly a quarter of the global population and generate around half of global GDP, the report said.

Most of the global middle class lives in Southeast Asia, the region that has experienced the fastest urban population growth in recent years, it noted.

But 91 percent of weather-related losses in Asia are uninsured, it added, compared with 32 percent in the United States, which had the highest level of insurance penetration in the study sample.

The report also said climate-driven population shifts into urban areas have the potential to create and exacerbate conflict, as in Syria.

In the course of five years of drought starting in 2006, Syria lost 85 percent of its livestock and saw crop production plummet, child malnutrition worsen and the subsequent migration of 1.5 million residents from rural to urban areas.

"These conditions led to protests, which ultimately escalated into civil war," Zurich-based UBS said in a statement.

However, the political and social clout of middle-class populations means their vulnerability to climate change risks should translate into pressure on governments to tackle global warming, the report noted.

"If the effects of climate change significantly hurt the middle class, the inevitable reaction should in turn elicit a strong response from policy makers."