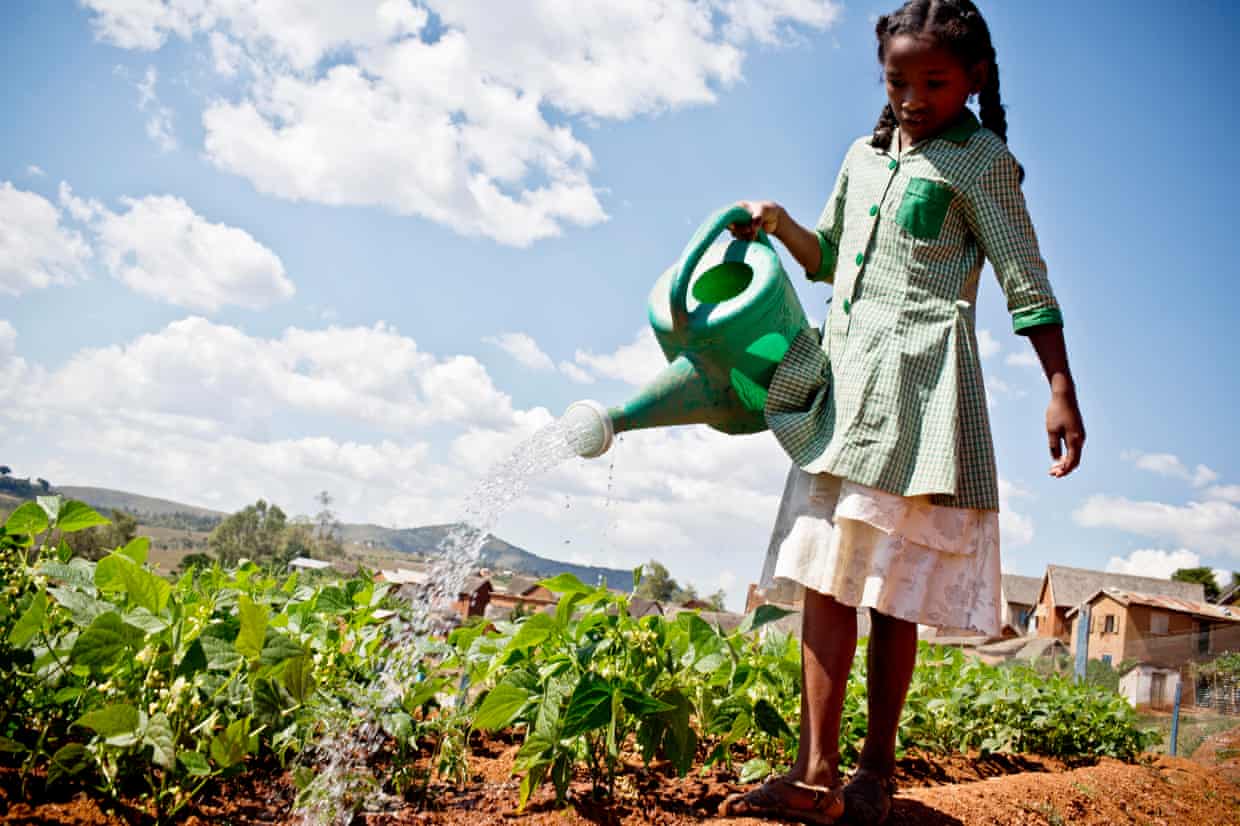 The garden at Masindray primary school, in Antananarivo, Madagascar. Weather patterns on the island are becoming more unusal and extreme. All photographs: Kate Holt/WaterAid

Severe droughts and floods have had a devastating impact on the island’s rural poor, who are reliant on small-scale farming or fishing...

Angenie, 21, lives in a country many people think of as an ecological paradise, home to a unique diversity of plants and animals. Yet within the past three years she has witnessed droughts and floods so severe she has had to flee her home to escape them – twice.

Angenie grew up in southern Madagascar where, as a child, she remembers “things being green”. But for the past few years a severe drought, blamed on the devastating effects of El Niño, has gripped the southern region. “The land got dry, really dry,” she says. “It got to the point we were not able to grow anything. People ate only dried cassava or cactus fruit.”

More than 80% of Madagascar’s rural poor are, like Angenie and her family, reliant on small-scale farming or fishing. With no way to feed themselves, she and her husband moved to the coastal city of Morondava three years ago, settling in a suburb called Tanambao, little more than a collection of ramshackle wooden houses on a strip of land wedged between a river and the sea.

She says: “At first life was a bit better here because at least we could go out and catch shrimps for our food. But last year we had floods. The water rose so fast. I had to carry my baby on my shoulders to get out. When we came back, everything was destroyed.” 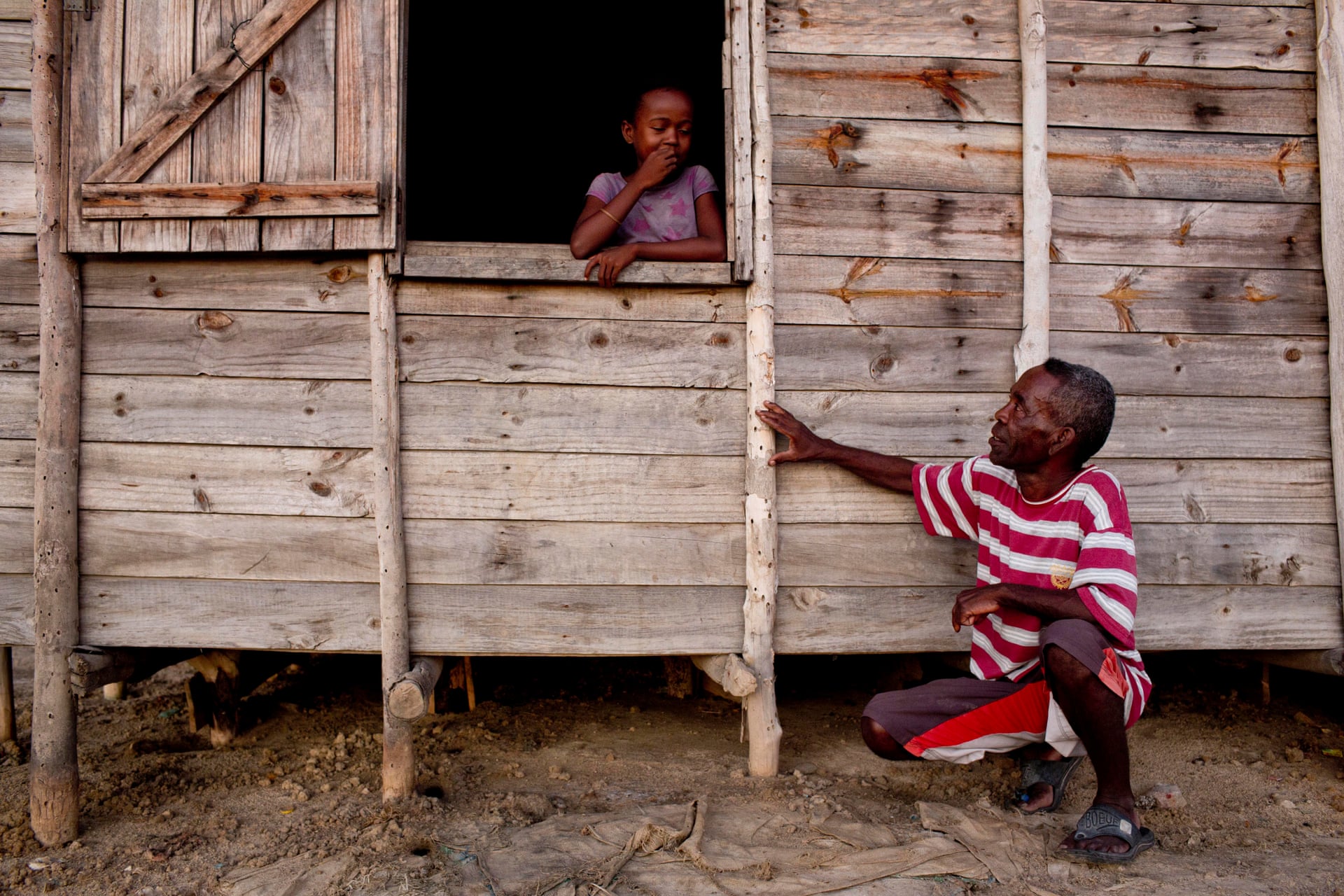 Facebook Twitter Pinterest François, who has lived in Tanambao village, Madagascar, all his life, shows his daughter a mark on his house that indicates the water level during last year’s floods.

Water levels are rising each year and weather patterns are becoming more unusual and extreme. Madagascar is one of the countries most exposed to cyclones in Africa. Climate change is expected to bring stronger cyclones and further droughts, which will have a dramatic impact on food security and infrastructure in a country where about 90% of the population already lives on less than $3 a day.

Morondava’s mayor, Kolo Friof, says the city is not equipped to withstand another cyclone or flood. The cyclone four years ago tore apart what was left of the old colonial sea defences, and he says he has no funds to rebuild them. “Tourism is our only industry here,” he says. “I am trying to work with the hotel owners to engage them to work with me by planting new mangroves. But what we are able to do ourselves isn’t enough.”

Tanambao’s community president blames newcomers like Angenie and her family for making the situation worse. “Urbanisation and the growing population is the problem,” he says. “We are getting more and more people coming here from the south. I tell them they have gone from something already bad there to something that is getting worse here. Every new household here means more trees cut in order to burn charcoal. Everyone is destroying the mangroves.”

Alan Walsch from the German aid agency GIZ says the situation is far more complex. “We know that many people are fleeing the south. Madagascar is an island, so people can rarely afford to leave the country – they move internally. But there hasn’t been a census in several years so we don’t know how many people have migrated or where to, which makes it impossible to plan programmes effectively. I often hear migrants getting the blame for cutting down trees, but in reality many communities are also doing it themselves. When you fly over Madagascar it is horrifying because you can really see the devastation and degradation caused by slash-and-burn farming techniques and deforestation. Only 10% of Madagascar’s original forest remains.”

GIZ is working in rural areas to replant and manage forests and support coastal communities. “We need to be working to tackle the effects of climate change and provide sustainable farming methods so that people don’t have to migrate and can stay in their own communities,” says Walsch.

But, he adds, “chronic underfunding” is a huge problem. “Madagascar does not have time to spare when it comes to the effects of climate change. Last year there was tremendous, unprecedented heavy rain, which flooded 60% of the capital city, causing landslides. Then, in March, heavy storms destroyed harvests in the north, while in the south there was no rain at all. There are big contradictions in weather patterns.” 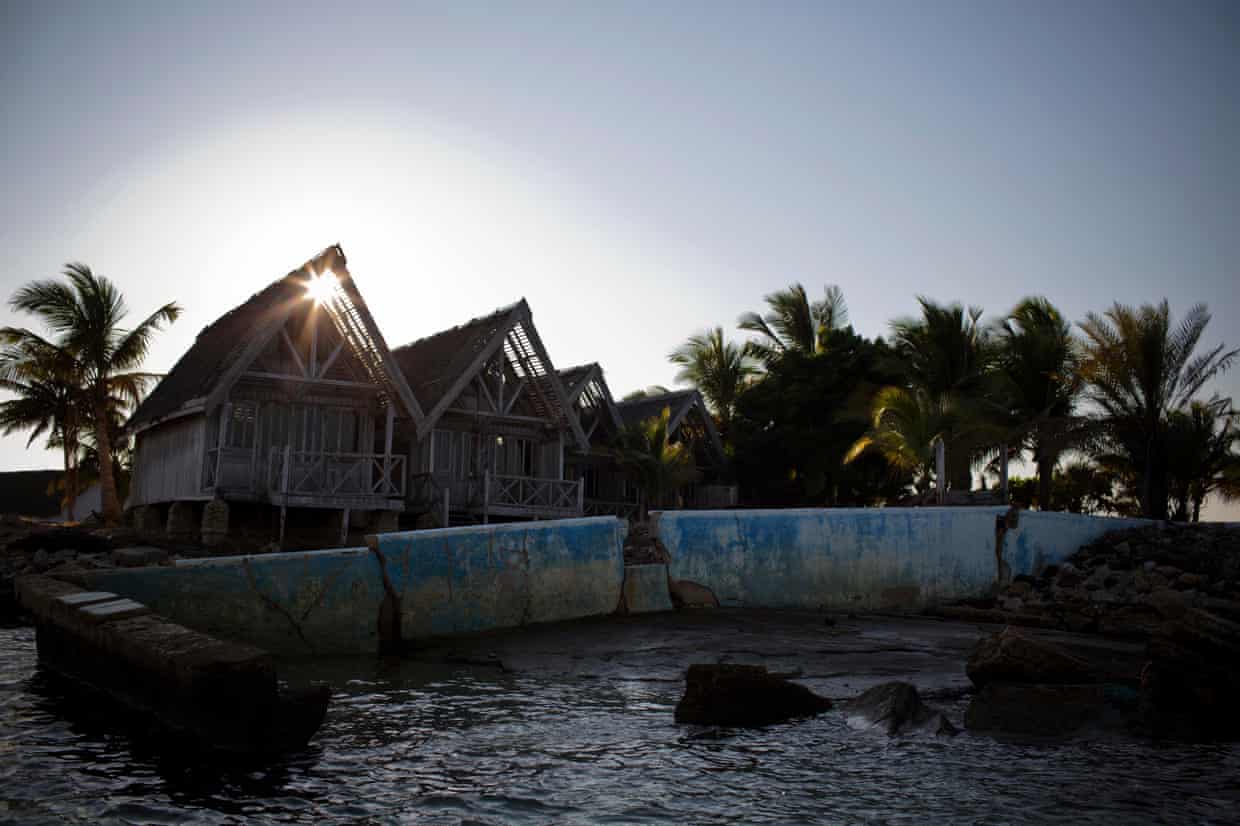 Louise Whiting, senior policy analyst on water security and climate change at WaterAid, says changing weather patterns are making the future of water supplies more uncertain in Madagascar, where, already, 12 million people – just over half the population – don’t have access to clean water. WaterAid is working to install flood-proof water points and improved sanitation points across the most at-risk areas.

Whiting believes the Paris climate deal reached last year falls far short of what is needed to help cities like Morondava. “In Paris only 16% of climate change funding was earmarked for adaptation,” she says. “The rest is marked for mitigation or to help countries stop emitting gases. This is not nearly enough.”

Angenie feels cornered: “I can’t go back to the south and I now have nothing here. I am frightened. I live only for today. I don’t know about tomorrow.”

by: Nadene Ghouri in Tanambao