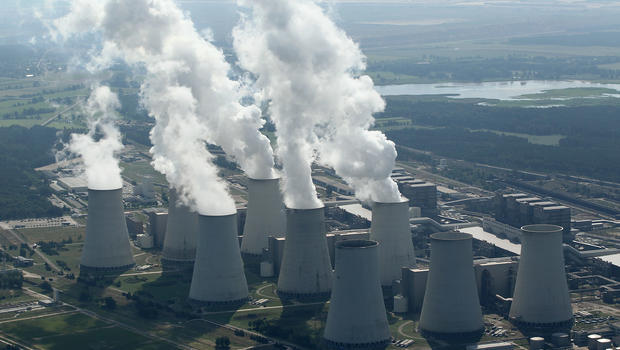 The European Environment Agency says the continent is facing rising sea levels and more extreme weather, such as more frequent and more intense heat waves, flooding, droughts and storms because of climate change...

The Copenhagen-based agency says that its assessment is based on the latest trends and projections on climate change and its impacts across Europe.

President Trump's promised roll back on environmental protection, combined with his belief that climate change is a hoax, has environmentalists and scientists worried. Jim Axelrod reports.

The European Union body says that observed changes in climate “are already having wide-ranging impacts” on ecosystems, the economy and on human health and well-being in Europe.

Its head, Hans Bruyninckx, said Wednesday that climate change “will continue for many decades to come,” adding the scale and impacts will, among other things, “depend on the effectiveness of implementing our global agreements to cut greenhouse gas emissions.”

The landmark Paris climate agreement, which went into effect in November, provides targets set by each country to reduce its emissions, with the aim of slowing the pace of global warming. But President Donald Trump has said in the past he believes climate change is a “hoax” and that he intends to “cancel” U.S. involvement in the Paris deal.

Meanwhile, the Earth set its third straight record for the hottest year in  2016, and scientists have grown increasingly alarmed by the accelerating rate of polar ice melt and the threat of rising sea levels that could inundate coastlines around the world.

CBS/AP January 25, 2017, 11:43 AM
source: http://www.cbsnews.com
original story HERE
New Climageddon book: Click here for Information on the new Climageddon book about the global warming emergency and what you can do.
Share Blog Post: If you would like to share this blog post on Facebook or in other ways go back to the original short version of this blog posting and look to lower right for the large green Share button.
Get Global Warming Blog RSS Feed: Sign up for free Global Warming Blog RSS feed by clicking here.
Sign Petition: Sign petition to declare an international global warming State of Emergency, click  here!
To see our: most current positions, opinions, comments, agreement or disagreement with this article, and/or possible criticisms related to the subjects or facts in the above article, click here.