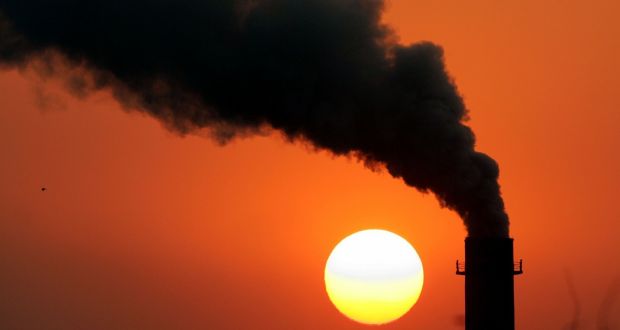 There has been much talk but little action by successive governments as they dithered over Ireland’s international undertakings to address global warming. Photograph: Kamal Kishore/ Reuters

Ireland is forecast to miss its 2020 carbon emission targets and to go on to breach limits that have been agreed for 2050...

The Climate Change Advisory Council has delivered a sharply critical response to the Government’s National Mitigation Plan for carbon emissions and concluded that Ireland will not meet its 2050 targets without additional policy interventions. Noting that many of the Council’s recommendations had not been implemented, chairman John FitzGerald called for further actions that would place the economy on an environmentally sustainable pathway.

The thrust of the Council’s intervention lies in its calculation that Ireland will not only miss its 2020 targets – something the Government now accepts – but will go on to breach carbon emission limits that have been agreed for 2050. To guard against that, and the heavy EU fines that failure will bring, the Council has recommended that intermediate carbon targets be set for 2030. The longer action is deferred, the more difficult it will be to meet our EU commitments.

During the last two decades there has been much talk but little action by successive governments as they dithered over Ireland’s international undertakings to address global warming. That ducking and diving continues. The latest Government offering – a National Mitigation Plan – published by Minister for Climate Action Denis Naughten is replete with woolly aspirations and unspecified timelines. Binding undertakings to cut carbon emissions by 2020 will not be met, at considerable financial cost to the State.

While the Government’s plan to reduce emissions in transport, electricity generation, the built environment and agriculture speaks of a need for studies, assessments and unspecified consideration of various options before they are implemented, the Advisory Council cuts to the chase. It favours ending peat subsidies for electricity generation and the phasing out of fossil fuels in transport. It recommends higher carbon taxes along with grants for retrofitting building stock to near-zero emission levels. It proposes the adoption of a comprehensive land use strategy for agriculture, where one-third of all greenhouse gases are generated. And it urges that the benefits to public health and quality of life of citizens from a decarbonised economy should become key components in a national dialogue on climate change.

It has been long-standing government policy to make the transition from fossil fuel dependency to a “low carbon, climate resilient and environmentally sustainable economy”. Few would quibble with that goal because of the misery caused by extreme flooding events and winter storms in Ireland, quite apart from EU commitments and global considerations. The problem, as always, involves hard political choices, and how to get from here to there without antagonising too many voters. The Government’s approach to climate change has been extremely tentative. As a course of action, that is neither wise nor sustainable.