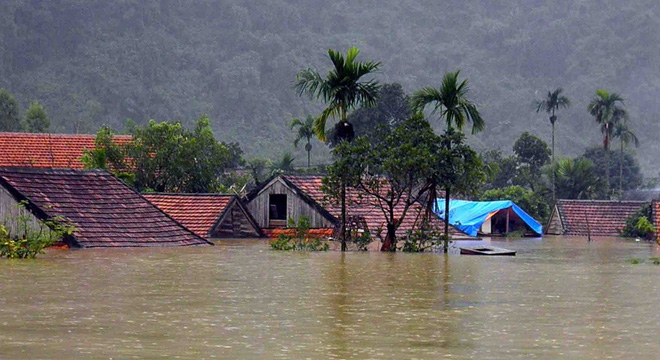 Vietnam is among five countries in the world to suffer the most from climate change...

According to the Central Steering Committee on Fighting and Preventing Calamities, the spell of cold weather which lasted from January 22 to January 28, 2016 in the north killed nearly 9,500 cattle and damaged 9,453 hectares of rice fields.

During the cold spell, snow not only appeared in mountainous areas near the border line, but also in Hanoi and Nghe An province, the thing which never happened in the past.

Scientists pointed out that the changes in weather and climate will have serious impact on the vector population and therefore lead to an outbreak of vector-borne diseases.

Vector-borne diseases are infections transmitted by the bites of infected arthropod species, such as mosquitoes, ticks, triatomine bugs, sandflies, and blackflies.

In Vietnam, rising seawater levels, temperature increases and changes in rainfall all are favorable conditions for mosquitoes to reproduce and transmit disease.

Dengue is a seasonal disease which is seen mostly in the Mekong Delta in the south of Vietnam. However, recent surveys found that dengue fever tends to appear year round and in northern provinces as well.

According to WHO, climate change has a close relation with the development of infectious diseases. As a rule, after natural calamities, the environment suffers major disturbances. Heavily contaminated water sources are one of the main causes of the outbreaks of gastrointestinal illness and other diseases spread by water sources.

Heat waves which appear more and more frequently and with higher intensity will increase the risk of thermal shock, stroke and myocardial infarction, and increase morbidity and mortality, especially among the poor, elderly and children.

In addition, climate change is related to changes in air quality, which, together with changes in temperature in the cold season, also contribute to an increase in chronic respiratory diseases and bronchial asthma.

The impact on human health caused by heat waves are a major concern of Vietnam’s health care sector. In Vietnam, ‘heat waves’ are understood as a ‘hot spell’.

Research on heat waves conducted in 2013 in Nghe An showed connections with the percentage of children aged below five hospitalized because of respiratory and diarrheal diseases.