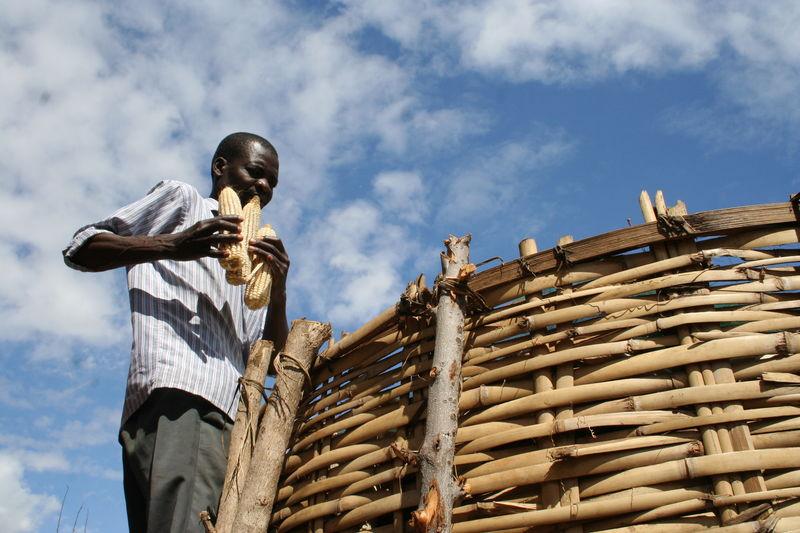 LILONGWE, Malawi (Thomson Reuters Foundation) - Elias Kanyangale is ecstatic about his maize harvest. Balancing on a homemade ladder, the farmer retrieves cobs from a full granary, the bounty of this year’s good rains, which broke three years of drought in Malawi...

Kanyangale, 44, from Kalumbu village, part of the capital city Lilongwe, says his 5-tonne harvest of maize is double the previous year’s crop, and he has some soya beans too.

But he is still worried about his income.

“I am not sure I will get good prices for my crop. I planted more maize for home consumption and more soya beans for sale because the rains were good after the drought of last year, but if I do not get good prices, I will not have enough income to help my family,” he said.

Many of Malawi’s smallholder farmers who grow maize as a cash crop have diversified into legumes like soya and groundnuts, hoping for better market prices should one crop fail due to drought.

But faced with climate change, uncertain markets and government policies they see as unhelpful, many farmers feel ill-equipped to decide how much of which crop to plant and when.

Last year’s extreme weather, bringing both floods and drought, left many in a food fix.

Acting on specialist advice to diversify away from maize, some farmers grew more tobacco and soya in 2016, based on expectations of favorable prices in 2017.

But a glut has frustrated them, depriving them of a ready market for their surplus soya beans.

Yet those who ignored the advice and stuck with maize are also in trouble because of a government ban on the export of maize grown for domestic consumption.

“I am not happy about the ban,” said Kanyangale, a member of the 1,500-member Nyanja Farmers' Association. “If this is not lifted soon, I could (be forced to) sell my maize at giveaway prices to middlemen.”

"Growing maize is a must for me and low prices affect me greatly," he added.

Changing farming ways does not happen overnight, explained Peter Kaupa, a field officer with the National Smallholder Farmers' Association of Malawi (NASFAM) who works with the Nyanja group.

“This year farmers will grow more tobacco because the price is right, and might grow less maize and soya because of what they have seen this season,” Kaupa said.

Farmers used to mono-cropping are reluctant to change their practices, he added, and struggle to make prompt decisions in the face of climate extremes and the implications of government policy for crop marketing and exports.

Kaupa’s organization offers training on farm business practices, including cost-benefit analysis of which crops to grow and climate-smart agriculture to adapt to erratic weather.

NASFAM’s initiative is part of a project promoted by the Technical Centre for Agricultural and Rural Cooperation (CTA), an international institution based in the Netherlands, which aims to reach over 200,000 farmers in Malawi, Zambia and Zimbabwe.

More than 50,000 smallholder farmers across five districts in Malawi will be shown how to access real-time climate information, obtain weather-based insurance, and use drought-tolerant crop varieties.

Olu Ajayi, project leader at the CTA, said it hopes to help smallholder farmers increase their yields during droughts.

“Our partner in Malawi, NASFAM, also addresses the marketing aspect of the value chain by facilitating opportunities for farmers to get the best price for their produce,” said Ajayi.

Alice Kachere, who also farms in Lilongwe, grew more maize than soya this year, fearing lower prices for the legume. Kachere hopes to sell her bumper harvest of 12.5 tonnes of maize and buy seed and equipment for next season.

Last year she planted tobacco but made a big loss and had to borrow money to prepare for this season. She too is anxious for the export ban to end so she can take advantage of trade with Kenya.

“I hear there is drought (in Kenya) and the prices we get will be high,” Kachere said. “I will be in trouble if the ban is not lifted.”

In May, Joseph Mwanamvekha, Malawi’s trade minister, said the government was ready to issue export licenses to traders who can prove they bought the maize for export and to farmers who have grown maize specifically to sell outside the country.

The government has not yet indicated when it will lift the ban on maize grown for home consumption, but the wait is affecting farmers who are anticipating better income from crop sales.

Malawi is projecting a bumper harvest of 3.2 million tonnes of maize this year, an increase of one-third over production in the 2015/16 season.

With an El Niño weather system forecast for this year, farmers would do well to brace for another drought by diversifying their crops, said Lluis Navarro, head of cooperation for the European Union in Malawi, which has invested in developing the southern African nation's agriculture.

“Maize is a crop that is very sensitive to climate change,” said Navarro.

Malawi’s maize prices are the most volatile in the region, he said, making farmers reluctant to invest and produce a surplus they cannot be sure of selling.