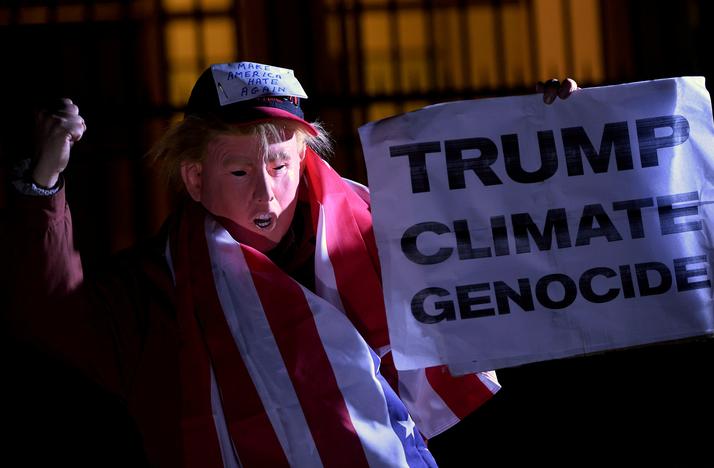 A man wearing a mask depicting U.S. President-Elect Donald Trump protests during a demonstration against climate change outside of the U.S. Embassy in London, Britain on November 18, 2016. REUTERS/Hannah McKay/File Photo

Climate scientists worried that President-elect Donald Trump will slash their budgets and sideline their research are entering survival mode, trimming the words "climate change" from study proposals, emphasizing business applications of their work, and safeguarding data that shows global warming is real...

The early reactions, gathered by Reuters in more than a dozen interviews, may foretell a broader shift in the U.S. climate science community, which had enjoyed solid political and financial support under President Barack Obama but could be isolated under a new administration skeptical of climate change and committed to expanding oil drilling and coal mining.

"I think it is maybe really necessary to refocus what you are doing and how you are labeling it," said Andreas Prein, a scientist at the federally funded National Center for Atmospheric Research, who previously had changed the term "climate change" in a project for the oil industry and expects such linguistic twists to proliferate.

Trump has questioned whether climate change exists and has raised the possibility of withdrawing U.S. support for a global accord to reduce carbon dioxide emissions, which an overwhelming majority of scientists believe is driving sea level rise, droughts and more frequent violent storms.

A member of the transition team further raised concerns among scientists this month by sending a questionnaire to the Department of Energy seeking the names of researchers there who worked on climate change issues, a move Trump’s team later disavowed.

Federal funding for climate change research, technology and international assistance hit $11.6 billion in 2014, from $2.4 billion in 1993, according to the U.S. Government Accountability Office. While Trump has not explicitly said he would cut such funding, one of his advisers told The Guardian newspaper last month that climate research at NASA would be eliminated.

A Trump transition team official did not respond to repeated requests for comment.

Prein at National Center for Atmospheric Research said he had replaced the politically charged term "climate change" with "global change" in a project he submitted for the oil industry.

He said that regardless of how it is labeled, interest in climate research would likely endure given the importance of extreme weather forecasting to a broad array of industries, like insurance and energy. However, he was concerned the longer-term work crucial to understanding the scope of global warming could lose critical support.

Climate scientist Ben Sanderson, also at NCAR, told Reuters he is applying to renew funding for assessing uncertainty in climate change. "Now the proposal would have to be defensible without referring to climate change explicitly, so to talk about weather risks in general," he said.

Tracey Holloway, an air quality scientist at the University of Wisconsin, said she believed simple word changes sometimes could help scientists avoid trouble. Using the term "weather" instead of "climate change," for example, could work for studies that deal with a short-term time scale, she said.

But Eric Holthaus, a meteorologist who writes for online magazine Slate, has taken efforts to protect scientists and their work a step further.

He spearhead an effort, with the support of the University of Pennsylvania and the University of Toronto, to let scientists move their data onto publicly available non-government servers. The project, called "DataRefuge," is intended to eliminate the chances of political interference with the data, he said.

The signals from the Trump transition team on climate change have also put members of Obama's outgoing administration on edge. Current Interior Secretary Sally Jewell told scientists at a conference in San Francisco this week they must confront climate change deniers and speak up if Trump tries to sideline them.

White House spokesman Josh Earnest later said in a press briefing he believed the concerns of the scientific community about Trump were "legitimate."

"If the incoming administration determines that they want to base their policy on something other than science, it looks like they’re going to get at least four years to try that out and we'll have an opportunity to see how it works," he said.

Other scientists were dealing with the stress of a new administration using humor. University of South Florida glaciologist Jason Gulley said his team had a list of joke projects for science under Trump. "How could we weaponize glaciers?” he asked, and what is the best real estate currently hidden under Greenland ice sheets.

(Additional reporting by Valerie Volcovici in Washington and Irene Klotz in San Francisco; editing by Richard Valdmanis and Phil Berlowitz)