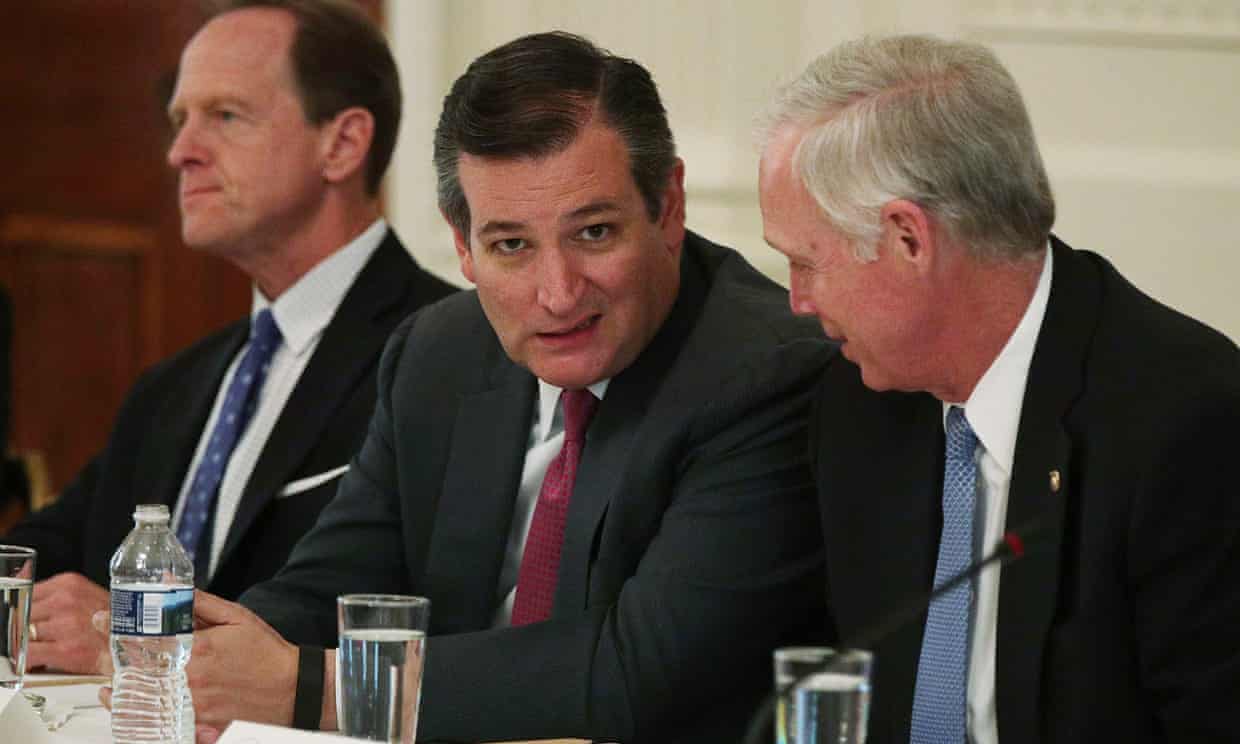 And in the process, illustrated the difference between skepticism and denial...

Whenever they hold one of their frequent hearings to reject and deny established climate science, congressional Republicans invariably trot out contrarian scientist John Christy, who disputes the accuracy of climate models. In doing so, Christy uses a cherry-picked, error riddled chart, but there’s a nugget of truth in his argument. Although the discrepancy isn’t nearly as large as Christy’s misleading chart suggests, atmospheric temperatures seem not to have warmed quite as fast since the turn of the century as climate model simulations anticipated they would. 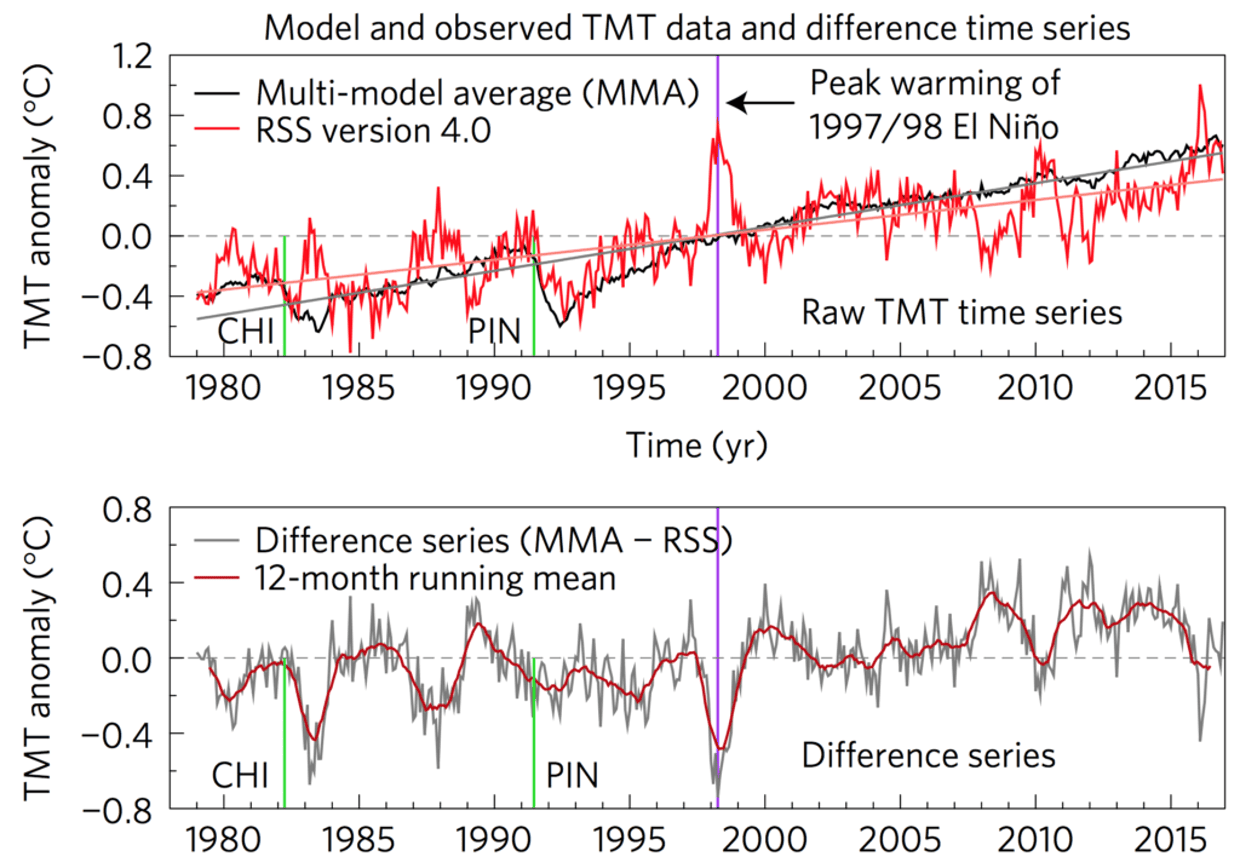 Remote Sensing Systems estimate of the temperature of the middle troposphere compared to the CMIP5 multi-model average (top frame), and the difference between the two over time (bottom frame). Illustration: Santer et al. (2017), Nature Geoscience

How you react to this information is a good test of whether you’re a skeptic or a denier. A denier will declare “aha, the models are wrong, therefore we don’t need any climate policies!” A skeptic will ask what’s causing the difference between the observational estimates and model simulations.

There are many possible explanations. Maybe the tricky and often-adjusted estimates of the atmospheric temperature made by instruments on orbiting satellites are biased. Maybe there’s something wrong with the models, or our understanding of Earth’s atmosphere. Maybe the inputs used in the model simulations are flawed. The answer is likely a combination of these possibilities, but in congressional testimony earlier this year, Christy tried to place the blame entirely on the models, with a denier-style framing:

the average of the models is considered to be untruthful in representing the recent decades of climate variation and change, and thus would be inappropriate for use in predicting future changes in the climate or for related policy decisions.

And in testimony to Congress in December 2015, Christy offered his unsupported speculation that the discrepancy was a result of climate models being too sensitive to rising greenhouse gases:

In a new study, a team climate scientists led by Ben Santer sought to answer this question. They effectively disproved Christy’s assertion that the discrepancy was due to models being too sensitive to the increased greenhouse effect. Instead, the main culprit seems to be incorrect inputs used in the climate model simulations.

The issue is that climate model simulations are run using specific scenarios. These scenarios assume specific changes in factors that influence global temperature and climate changes (known as “forcings”), like rising levels of atmospheric greenhouse gases and changes in solar and volcanic activity. Climate models don’t make “predictions;” rather, they make “projections” of how temperatures and other climatological factors will change in response to those forcing input scenarios. There’s also a random component known as “internal variability” due to factors like unpredictable ocean cycles.

An infamous example of deniers exploiting this wonky technical point to mislead policymakers happened in 1998. Congressional Republicans invited fossil fuel-funded Pat Michaels to testify ahead of the Kyoto international climate negotiations. In a shameless distortion of reality, Michaels evaluated a 1988 global temperature projection by James Hansen at NASA, but deleted all except the scenario that was the least like the actual forcing changes that had occurred over the prior decade. By only looking at Hansen’s model projection under a scenario where greenhouse gases rose much faster than they had in reality, Michaels deceptively made it appear as though Hansen’s climate model had vastly over-predicted global warming.

Santer’s team found a similar issue in comparing simulated and observed changes in atmospheric temperatures over the past few decades:

There are known systematic errors in these forcings in model simulations performed in support of the IPCC Fifth Assessment Report. These errors arise in part because the simulations were performed before more reliable estimates of early 21st century forcing became available. The net effect of the forcing errors is that the simulations underestimate some of the cooling influences contributing to the observed “slowdown”.

For example, were Christy right that models are too sensitive to rising greenhouse gases, they should be systematically wrong during the entire period for which we have observational data. On the contrary, aside from a small discrepancy in the late 20th century that can be explained by natural internal variability, Santer’s team showed that the difference between model simulations and observations only begins around 1998. A problem with model sensitivity would also show up in studies looking at global temperature changes in response to large volcanic eruptions, which create a big change in forcing and temperature. But those studies rule out the low climate sensitivities that Christy favors, and as Santer’s team notes:

there are no large systematic model errors in tropospheric cooling following the eruptions of El Chichon in 1982 and Pinatubo in 1991.

On the other hand, research has identified a number of real-world cooling influences in the early 21st century that weren’t accurately represented in the climate model simulation scenarios. The sun went into an unusually quiet cycle, there was a series of moderate volcanic eruptions, and the boom in Chinese coal power plants added sunlight-blocking pollution to the atmosphere. Using statistical tests, Santer’s team showed that those unexpected cooling effects combined with shifts in ocean cycles best explained the model-data discrepancy in atmospheric temperatures over the past 20 years.

Deniers respond by turning on the spin cycle

Unsurprisingly, in blogs and on Twitter, deniers tried to spin the results of this study in their favor. Some claimed that the paper admitted there was a “pause” or “hiatus” in global warming. In reality, the paper used neither term, but did use the phrase “slowdown” 15 times, including explicitly clarifying that it was a “temporary” slowdown. In other words, the study clearly rejected the myth that global warming “paused;” instead, the rise in atmospheric temperatures temporarily slowed due to the aforementioned decline in solar activity, increase in pollution from coal plants and volcanic eruptions, and shifts on ocean cycles.

The answer in this case is that those forcings (solar activity, coal pollution, volcanic eruptions) and ocean cycles acted to temporarily slow the warming of atmospheric temperatures in a way that wasn’t included in the climate model simulation inputs. But that shouldn’t assuage our concerns about climate change – solar activity won’t offset long-term global warming; nor will volcanic eruptions, coal pollution, or ocean cycles. These are all short-term effects that all had a cooling effect over the past 20 years, during which time the planet nevertheless kept on warming due to the overpowering force of human carbon pollution.

The climate models themselves are still quite accurate, and paint a frightening picture of where we’re headed if we follow the status quo scenario of burning lots of fossil fuels. But if we can reduce human carbon pollution, we’ll shift to a scenario with a long-term global warming slowdown.