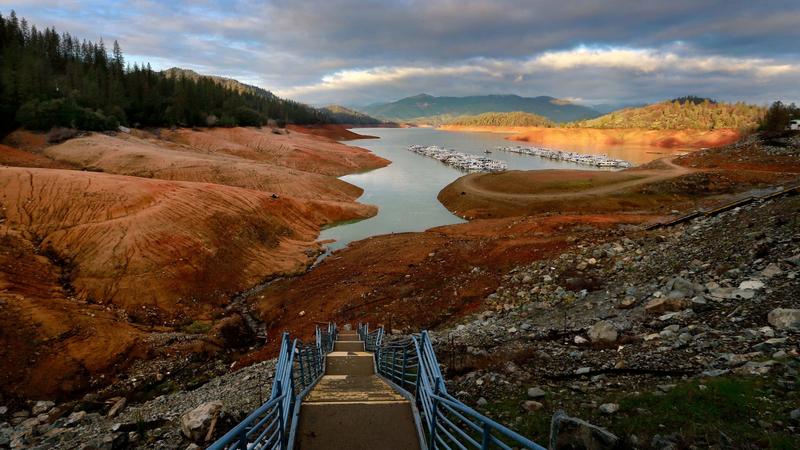 In June 2014, Lake Shasta was at 37% of capacity due to the long California drought. (Allen J. Schaben / Los Angeles Times)

California could be hit with significantly more dangerous and more frequent droughts in the near future as changes in weather patterns triggered by global warming block rainfall from reaching the state, according to new research led by scientists at Lawrence Livermore National Laboratory...

Using complex new modeling, the scientists have found that rapidly melting Arctic sea ice now threatens to diminish precipitation over California by as much as 15% within 20 to 30 years. Such a change would have profound economic impacts in a state where the most recent drought drained several billion dollars out of the economy, severely stressed infrastructure and highlighted how even the state most proactively confronting global warming is not prepared for its fallout.

The latest study adds a worrying dimension to the challenge California is already facing in adapting to climate change, and shifts focus to melting polar ice that only recently has been discovered to have such a direct, potentially dramatic impact on the West Coast. While climate scientists generally agree that the increased temperatures already resulting from climate change have seriously exacerbated drought in California, there has been debate over whether global warming would affect the amount of precipitation that comes to California.

The study, published Tuesday in the journal Nature Communications, provides compelling evidence that it would. The model the scientists used homed in on the link between the disappearance of sea ice in the Arctic and the buildup of high ridges of atmospheric pressure over the Pacific Ocean. Those ridges push winter storms away from the state, causing drought.

The scientists found that as the sea ice goes away, there is an increase in the formation of ridges. 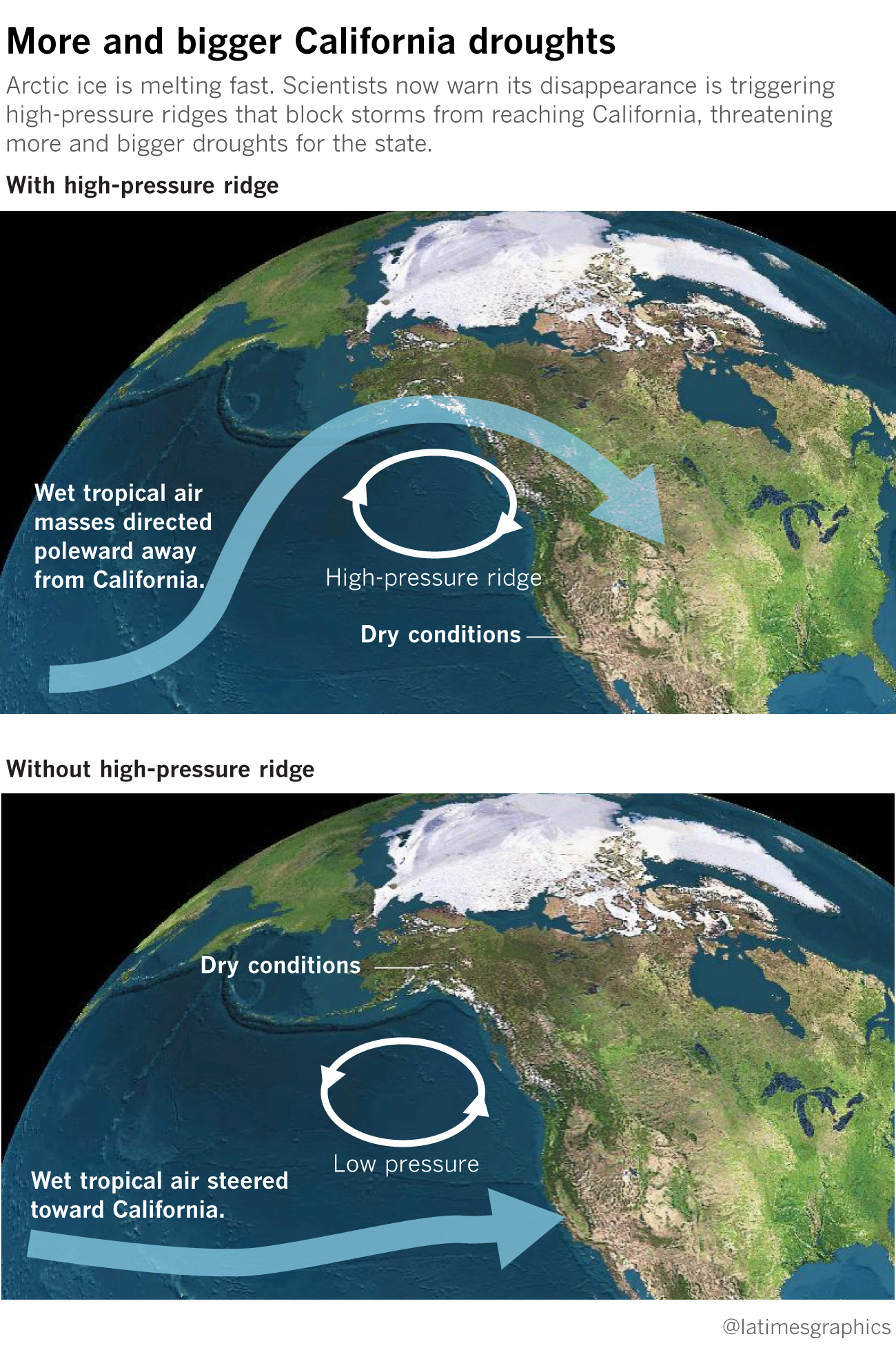 “Our design was aimed at looking at what will happen in 20 to 30 years, when the Arctic becomes ice-free in the summer,” said Ivana Cvijanovic, the lead climate scientist on the study. “It is coming soon. We want to understand what the impact would be. … The similarities between what will happen and [how weather patterns caused] the most recent drought are really striking.”

Rainfall in California would drop, on average, 10% to 15% in the coming decades under Cvijanovic’s model, but the decline would present itself sporadically, exacerbating the potential for drought. Some years the decline in rainfall because of diminished Arctic ice would be much steeper than 15%. Other years would be wetter than they otherwise would be.

The study is yet another by federally funded researchers that finds the failure to more rapidly diminish greenhouse gas emissions could have a serious impact on California and other parts of the country. The findings contrast starkly with Trump administration policy on warming, which ignores the mainstream scientific consensus that human activity is driving it. The administration has been working aggressively to unravel Obama-era action on climate change, withdrawing from the Paris agreement that seeks to limit its impact, dismantling restrictions on power plant emissions, and signaling that it will relax vehicle mileage rules that are a critical component to addressing global warming.

The warnings about the impact of melting sea ice on California are being embraced by some prominent climate scientists. They say that while the study is just one of multiple models being used to project global warming impacts, it is bolstered by other studies that have signaled a connection between the ice melt in the Arctic and the buildup of atmospheric ridges affecting California. Michael Mann, director of the Earth System Science Center at Pennsylvania State University, said in an email that it paints a sobering picture for the state.

“As we learn more about the subtleties in the dynamics of climate change, we are learning that certain climate change impacts, like California drought, may be far worse than we had previously thought,” Mann wrote. “It also means that, when it comes to water resource issues in California, the impacts of climate change may exceed our adaptive capacity. That leaves only mitigation — doing something about climate change — as a viable strategy moving forward.”

Gov. Jerry Brown has been taking a lead globally in confronting climate change, warning the Trump administration’s approach is reckless and defies science. He traveled last month to a United Nations climate conference in Bonn, Germany, to meet with world leaders and send the signal that much of the nation is moving to act on climate change, even if President Trump is not. Brown is helping lead a coalition of state and local governments that is vowing to reduce emissions enough to meet the entire country’s obligation under the Paris agreement, which President Obama signed last year.

But the Trump administration’s retreat threatens to substantially slow the rate at which U.S. climate emissions decline. And even if all commitments made in the Paris agreement are kept, climate scientists say the Arctic ice situation would still be dire.

“This is happening very quickly,” said Noah Diffenbaugh, a climate scientist at Stanford University. “The change is dramatic, and it is taking place faster than had been projected by climate models.”

The change is dramatic, and it is taking place faster than had been projected by climate models.

Diffenbaugh said the study is a breakthrough for climate researchers who have been struggling to pinpoint the impacts of melting Arctic ice. “Being able to isolate the effect of melting sea ice on the atmosphere and the ocean’s response — and how it impacts precipitation in California — that is a big step forward,” he said.

Because the model only projects future impacts, the study does not focus on the role melting Arctic ice may have played in the massive drought from which California recently emerged — the most severe in 1,200 years, according to one scientific study. But the atmospheric patterns leading to that drought had all the characteristics of those that can be triggered by Arctic sea ice melt, Cvijanovic said, raising the prospect that California might have dodged the latest drought — or at least not have been hit as hard — if not for the large amount of ice that has already vanished.

“There is lots of research to be done,” she said. “Hopefully we do it in time to allow people to plan for whatever may be coming.”