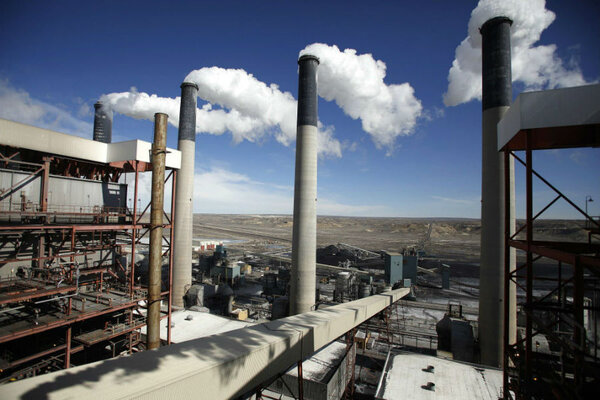 A plant in Wyoming burns coal for power. This week, scientists announced that our atmospheric levels of carbon dioxide have surpassed the milestone mark of 400ppm. Jim Urquhart/Reuters/File

Carbon dioxide concentrations in our atmosphere have reached 400 parts per million, and there's no going back in our lifetimes, say scientists...

A group of scientists who monitor Earth’s atmosphere using data from Hawaii’s Mauna Loa Observatory announced yesterday that our climate has reached a milestone.

The Earth's atmosphere now contains 400 parts per million (ppm) of carbon dioxide, a level of greenhouse gases considered a symbolic limit, the team of researchers wrote in a study published in the journal Nature Climate Change. And that level's not going to change anytime soon, they say.

"Our forecast supports the suggestion that the Mauna Loa record will never again show CO2 concentrations below the symbolic 400 ppm within our lifetimes," the researchers wrote.

The burning of fossil fuels and human land use are long-term contributors to the presence of greenhouse gases in the atmosphere. However, the scientists consider El Niño to be an important factor for the sharp rise this year. The weather system can dry out tropical land areas, inhibiting the growth of CO2-absorbing trees and bringing more wildfires, which produce CO2.

The team, which is led by first author Richard Betts of the U.K. Met Office's Hadley Center, says that this year will also bring the largest jump in average yearly atmospheric concentrations on record, with a rise of 3.15 parts per million (ppm). During the last major El Niño, however, in 1997-8, the concentrations rose only 2.9 ppm from the previous year's average.

And while the El Niño year may have pushed the values up, the team does not believe that on average we will stay below 400 ppm again in our lifetimes. Carbon dioxide stays in the atmosphere for hundreds of thousands of years, so even reduced or flatlined carbon emissions couldn't create a quick fix. The 400 ppm levels are part of a steady increase in carbon dioxide levels since the industrial era, compared to the planet's pre-industrial CO2 concentration of 280 ppm.

However, the current 400 ppm level is not unprecedented in the Earth's history. Scientists believe that the Earth's atmosphere was regularly 360 to 400 ppm three million years ago during the mid-Pliocene era. At that time, water levels were 50 to 80 feet higher than they currently are. Current sea levels have been at a sharp rate of increase, rising an an unprecedented rate of 0.12 inches per year, compared to a sea level that was basically flatlined between 0 AD and 1900.

Scientists do not believe that crossing into the 400 ppm zone will mark any significant changes in the climate change that we have already been seeing. Rather, they look at it as a moment for humanity to take stock of the current situation.

"I don't think anything sort of special will happen just because we're going past 400," Dr. Betts told The Washington Post. "But I do think that these numbers are important for awareness, really.… It's a reminder of the long-term effects we're having on the system."