CONSERVATIVES CHEER EPA CUTS THAT ACTIVISTS FEAR 'WILL BE BORNE BY LUNGS'... 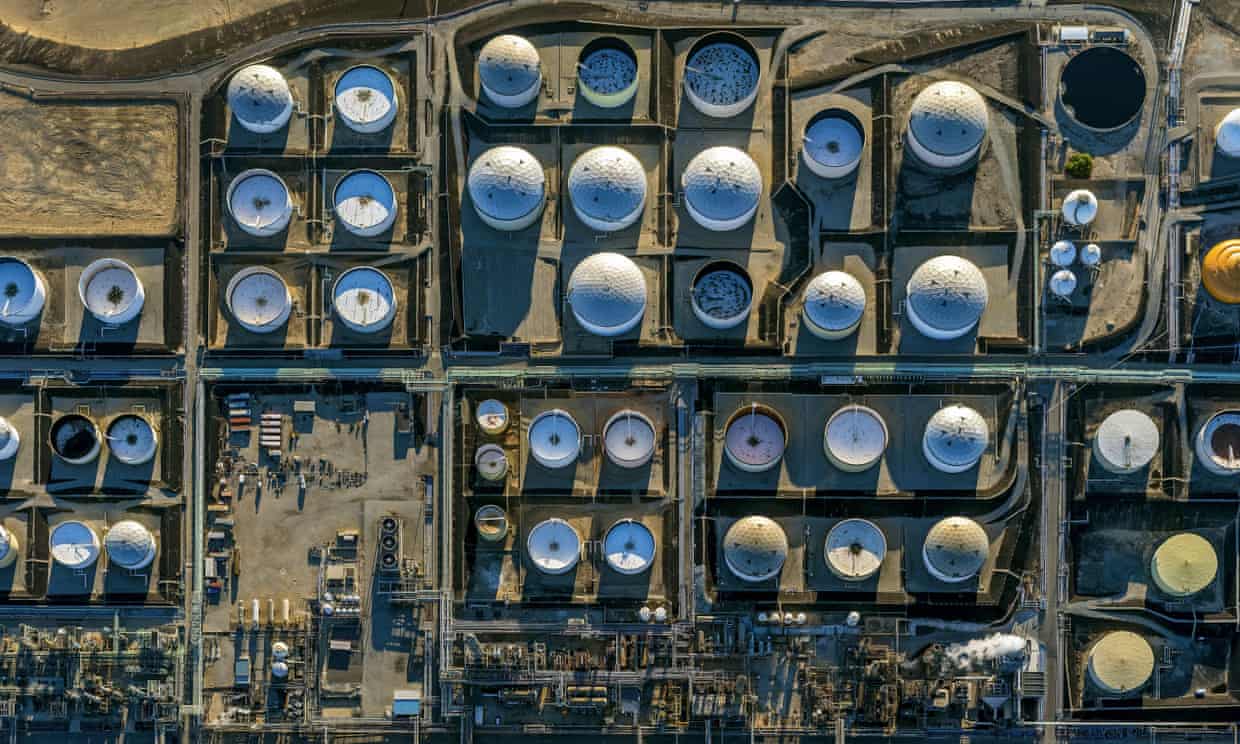 Oil refineries in California. Rules around climate change, water pollution and vehicle fuel standards are all in the process of being redrawn by the EPA. Photograph: REX/Shutterstock

Scott Pruitt, administrator of the Environmental Protection Agency, caused conniptions among scientists this week by claiming that carbon dioxide isn’t the primary catalyst of global warming. Conservative groups and industry, on the other hand, heard hints that a cherished goal may be within reach.

In 2009 the EPA determined that greenhouse gas emissions “endanger both the public health and the public welfare of current and future generations”, opening the door to regulation. Donald Trump’s crusade against government strictures could target this finding, effectively making it official US policy that burning fossil fuels poses no threat to Americans, despite a mountain of scientific literature to the contrary.

“I suspect the president and his team are doing due diligence in this area and I’m hopeful they will request that the administrator reviews the endangerment finding,” said Tom Pyle, who served on Trump’s EPA transition team.

The conservative American Energy Alliance questioned Trump on the finding before the election and elicited a promise that he would revisit the CO2 finding once in office. Pyle, who is president of the group, expects the administration to follow through. The EPA declined to comment.

“The president has worked diligently to fulfill his promises and I am confident he will do so,” Pyle said. “The Clean Air Act was abused by the previous administration to fit their agenda. It’s up to Congress to make a decision on CO2.”

But even if the Trump administration shies away from a lengthy and bitterly opposed bid to repeal the finding, it’s clear that America’s environmental laws are undergoing the most radical shakeup since the 1970s. Rules around climate change, water pollution and vehicle fuel standards are all in the process of being redrawn. Coal, oil and gas companies are being ushered onto public land and waters. Areas of scientific research are set to be sidelined.

“I think Scott Pruitt would have a hard time getting EPA staff to work on reversing the endangerment finding, he understands it would be a huge lift,” said Jeff Holmstead, a former EPA assistant administrator. “But you don’t need to do that to do away with the Clean Power Plan or revisit the car and truck standards.

Holmstead, who served under George W Bush, said that the Obama administration went “beyond what Congress intended”.

“We will see a return to the EPA’s core mission, we’ll see reforms of the approvals process so that it is faster and more predictable,” he said.

Trump has already signed measures that allow miners to dump waste into streams, and that facilitate the controversial Keystone XL and Dakota Access oil pipelines. The Clean Water Act, which Obama used to expand protections for the drinking water of 117 million Americans, is also being reviewed to “evaluate whether it is stifling economic growth or job creation”.

The administration is now expected to turn its attention to unravelling the Clean Power Plan, reportedly without a replacement. The plan, a centerpiece Obama-era climate policy, sets emissions limits on coal-fired power plants and is currently being challenged in court by over a dozen Republican-controlled states. The Trump administration may drop the legal defense of the plan.

New fuel standards, which require cars built from 2017 are able to run 54.5 miles per gallon, are also set to be reviewed. Pruitt, who has previously railed against the EPA’s “activist agenda” meddling in state’s rights, could even move to prevent states such as California exceeding minimum federal standards for fuel efficiency. 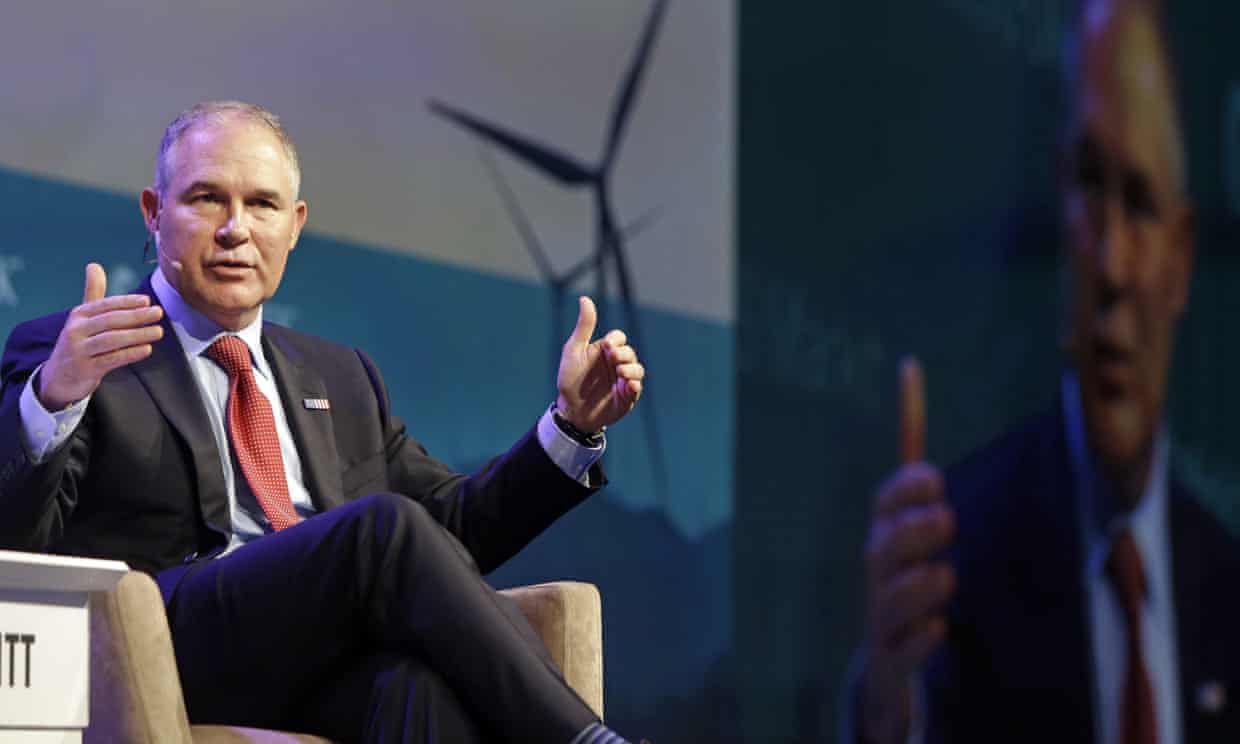 EPA administrator Scott Pruitt was found to have close ties with fossil fuel interests while he was attorney general of Oklahoma. Photograph: Melissa Phillip/AP

The White House, following Trump’s lead that the EPA should be reduced to “tidbits”, wants to slash the regulator’s budget by 25%, laying off one in five staff. While the final budget is likely to be less severe, critics have noted that the proposed cuts land heaviest on minority and low-income communities. The cuts would effectively dismantle the office of environmental justice, help for Alaskan villages, and programs for support for minority-owned small businesses and climate adaptation.

“These cuts would have a devastating impact upon the health of tens of millions of people across the country,” said Bill Becker, executive director of the National Association of Clean Air Agencies.

“The brunt of these cuts will be borne by people’s hearts and lungs and disproportionately effect those in the major metropolitan areas and those who are poor and can’t fend for themselves. I hope I’m wrong but I don’t see this budget changing that much.”

Mustafa Ali, who worked on environmental justice issues for the EPA since 1992, resigned from the regulator last week.

“Doing this work for almost 25 years, I’ve seen a lot of people get sick and die,” Ali said. “I hope the new administration will step up and prioritize environmental justice concerns but to date I’ve not seen that commitment.”

“They are sending the signal that they don’t value the lives of communities of color, low income communities and tribal people,” he added. “There are astronomical rates of asthma among people of color, in some places it’s devastating communities.”

Other environmental agencies face similar futures. The National Oceanic and Atmospheric Administration (Noaa) has been lined up for a 17% budget cut, mostly in climate data and the elimination of several smaller programs, such as Sea Grant, which prepares coastal communities for storms, sea level rise and altered fishing conditions.

Jane Lubchenco, a former Noaa administrator for Obama, said the cuts would be “devastating to the economy, jobs and to the safety and livelihoods of Americans in every state”.

But after years of skepticism and investigations into supposed malpractice by Noaa, Congressional Republicans have started agitating for Nasa’s Earth science budget to be redeployed for deep space exploration, threatening the nation’s other home for climate research. The proposed cuts fall in line with an ethos that treats climate change, at best, as a boutique environmental issue that drains public funds and stifles business.

Trump has promised to “unleash” a new wave of oil and gas drilling, and to revitalize the ailing coal industry, largely with its plan to cut environmental regulations.

A three-year moratorium on coal mining on federal land is expected to be lifted by Ryan Zinke, the new interior secretary, who after riding a horse into work on his first day promptly signed an order to expand access to public lands.

The zeal for deregulation across the new administration has been decried by environmentalists as a recipe for fossil fuel cronyism, runaway climate change and toxic water crises like the one seen in Flint, Michigan. But proponents claim that the environment can still thrive without regulations.

“All these doomsday scenarios won’t come to fruition,” Pyle said, calling it a “silly straw man” to accuse Obama critics of apathy toward the environment.

“I have kids, I take them camping. I don’t want them to get asthma,” he said. “You can be for the environment and not be for the way the previous administration abused the regulatory process.”