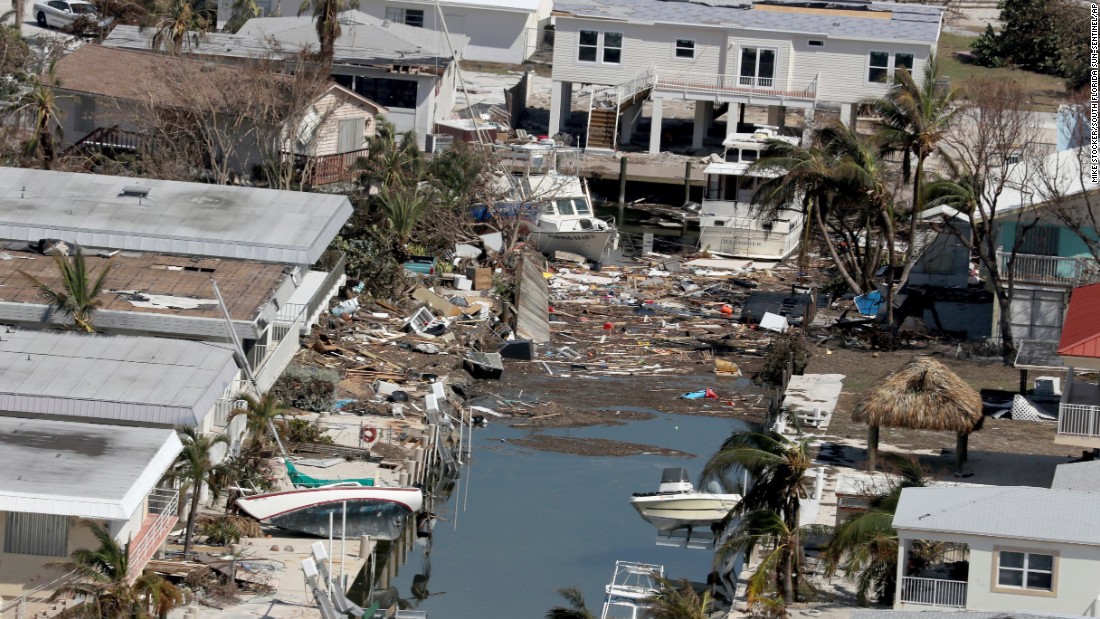 Property owners in some Florida counties were in a lather over restrictions on new coastal construction after Hurricane Eloise took dead aim at the Panhandle in 1975, leaving rubble where older structures had stood...

Once again, Floridians — and the nation — are getting a message. Whether one thinks it's divine or natural doesn't matter.

Climate change is a reality. That human activity is fueling it is reality. The consequences, like hurricanes Harvey and Irma, are reality.

It's also a reality that the warmer the water that births and feeds hurricanes, the more violent they will be.

Ocean temperatures have been rising steadily to their present extremes. Never before had two Category 4 hurricanes targeted the United States in a single season, let alone within weeks of each other. Never before had one spent three days as a Category 5 in the open Atlantic.

Who delivered — and who didn’t — on Hurricane Irma’s test | Editorial...

Had Irma's eye moved up the Gulf of Mexico rather than straying onto the peninsula, Florida's damages, severe as they are, would have been much worse.

It's true that no single Texas hurricane, Kansas tornado, California wildfire, tropical disease or crop failure abroad can be attributed solely to climate change, but it's beside the point. What matters is that global warming increases the risks.

"The basic physics of the climate are well understood. Burning fossil fuels emits carbon dioxide. And carbon dioxide is a greenhouse gas that traps heat in the atmosphere. There is no debate about that. The link is as certain as the link between smoking and cancer.

"A broad consensus of scientists also warn of the influence of the warming climate on extreme weather events. Hurricanes Harvey and Irma, the enormous wildfires in the Western United States and widespread flooding from monsoons in Southeast Asia are potent reminders of the cost of ignoring climate science."

Whitman, a former New Jersey governor who was President George W. Bush's first EPA administrator, is a Republican. That she believes in the causes of climate change puts her in a minority in her party. Public opinion polls consistently show that what people believe about climate change depends greatly on their party affiliation. You see the difference reflected in the deaf ears and sightless eyes of Republican politicians, including Florida Gov. Rick Scott and President Donald Trump, who turn away from overwhelming evidence.

In Florida, the state most susceptible to sea level rise as well as to hurricanes, the Florida Center for Investigative Reporting found state employees are discouraged from using the terms "climate change" and "global warming." In a public meeting, one official refused to acknowledge the words when they were put directly to him.

The governor denies such orders exist, yet he consistently refuses to address global warming. Instead, he says he wants to focus on beach renourishment and flood mitigation. Yes, flooding and erosion must be addressed, but let’s also address the problem at its source.

Scott’s commanding presence in the Irma crisis does not excuse him from dismissing the worst threat to Florida's future. If he runs for the U.S. Senate next year as expected, it will be a clear and significant difference between he and Sen. Bill Nelson.

The Trump administration's stance is abominable. From withdrawing the United States from the Paris Accord, to killing rules on mountaintop coal mining, to populating scientific advisory boards with energy industry hacks, to censoring such terms as "climate change" and "clean energy" from federal websites, the president has been waging war on science with a ferocity not seen since Galileo was forced on pain of death to deny that the earth orbits the sun.

Over the weekend, the administration sent mixed signals to Europe about possibly remaining in the Paris Accord. The White House swiftly denied that, but with wiggle room. Sarah Huckabee Sanders, the press secretary, wrote on Twitter that Trump is firm on withdrawing "unless we get pro-America terms."

That is unreal. A heroic agreement reached among virtually all the world's nations cannot — and should not — be renegotiated to suit the late-blooming domestic political agenda of any one of them. It is a practical impossibility as well as a moral outrage.

Trump, who has called global warming a Chinese hoax, chose a notorious climate change denier, Scott Pruitt, to run the EPA. It would be hard to find a more banal remark than Pruitt's statement that Irma was no time to talk about climate change.

"To use time and effort to address it at this point is very, very insensitive to the people of Florida," Pruitt said.

No, what's insensitive to the people of Florida is his denial of climate science.

Whitman responded to the news that Pruitt has appointed a "red team" of dissenting scientists to challenge the vast climate change consensus of thousands of others. She called it a "slow-rolling catastrophe in the making."

People today increasingly feel free to believe whatever suits them and there are still some who believe the world is flat, the moon landings were faked and smoking doesn't cause cancer. But there is no excuse for so-called leaders to exploit such gullibility.

Rank-and-file Republican voters take their cues from above. It's hard to believe that Scott, Pruitt or even Trump are uninformed as all that. More likely, it reflects Trump's false promises to coal miners that he would restore jobs lost to natural gas, not environmentalism, and to the Republican Party's financial alliance with the Koch brothers and other extractive energy industry profiteers.

Many Americans wonder how so many of the nation's founders and other otherwise decent people were able to rationalize slavery. By the light of their times, though, there wasn't anything wrong with it and they could not envision prosperity without it.

Today, the same profit motive underlies the great immorality of climate science denial. Two centuries from now, in a world made more inhospitable to life as we know it, surviving people will again wonder, "How could they?"

By: Sun Sentinel Editorial Board

Editorials are the opinion of the Sun Sentinel Editorial Board and written by one of its members or a designee. The Editorial Board consists of Editorial Page Editor Rosemary O’Hara, Elana Simms, Andy Reid, Deborah Ramirez and Editor-in-Chief Howard Saltz.