COULD A £400BN PLAN TO REFREEZE THE ARCTIC BEFORE THE ICE MELTS REALLY WORK? 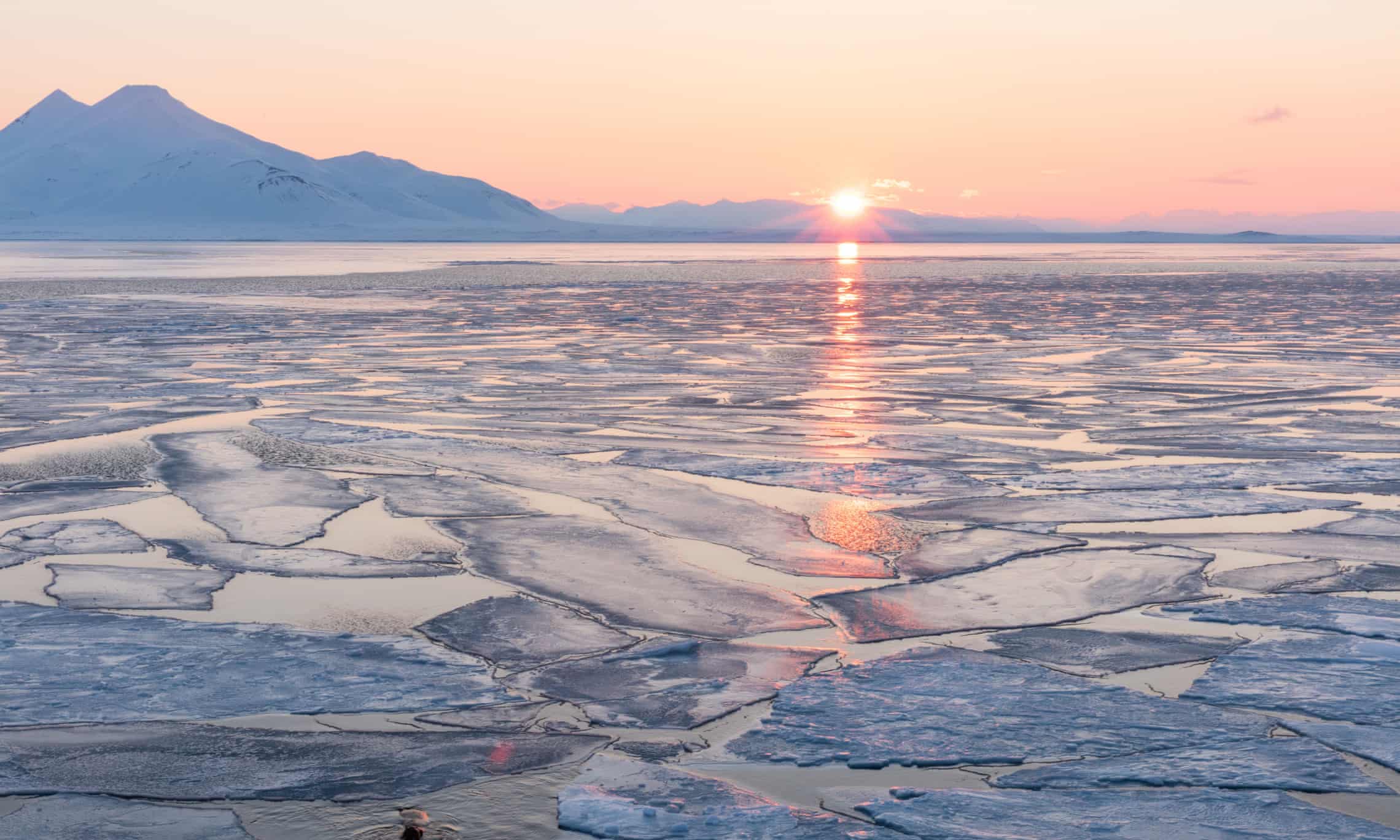 Temperatures are now so high at the north pole that scientists are contemplating radical schemes to avoid catastrophe...

hysicist Steven Desch has come up with a novel solution to the problems that now beset the Arctic. He and a team of colleagues from Arizona State University want to replenish the region’s shrinking sea ice – by building 10 million wind-powered pumps over the Arctic ice cap. In winter, these would be used to pump water to the surface of the ice where it would freeze, thickening the cap.

The pumps could add an extra metre of sea ice to the Arctic’s current layer, Desch argues. The current cap rarely exceeds 2-3 metres in thickness and is being eroded constantly as the planet succumbs to climate change.

“Thicker ice would mean longer-lasting ice. In turn, that would mean the danger of all sea ice disappearing from the Arctic in summer would be reduced significantly,” Desch told the Observer. 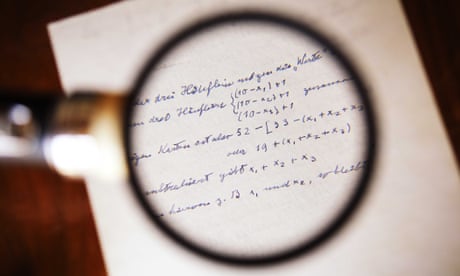 Does strange quantum behaviour emerge from run-of-the-mill classical physics? If so, what does this tell us about the fundamental nature of reality? LISTEN...

Desch and his team have put forward the scheme in a paper that has just been published in Earth’s Future, the journal of the American Geophysical Union, and have worked out a price tag for the project: $500bn (£400bn).

It is an astonishing sum. However, it is the kind of outlay that may become necessary if we want to halt the calamity that faces the Arctic, says Desch, who, like many other scientists, has become alarmed at temperature change in the region. They say that it is now warming twice as fast as their climate models predicted only a few years ago and argue that the 2015 Paris agreement to limit global warming will be insufficient to prevent the region’s sea ice disappearing completely in summer, possibly by 2030.

“Our only strategy at present seems to be to tell people to stop burning fossil fuels,” says Desch. “It’s a good idea but it is going to need a lot more than that to stop the Arctic’s sea ice from disappearing.”

The loss of the Arctic’s summer sea ice cover would disrupt life in the region, endanger many of its species, from Arctic cod to polar bears, and destroy a pristine habitat. It would also trigger further warming of the planet by removing ice that reflects solar radiation back into space, disrupt weather patterns across the northern hemisphere and melt permafrost, releasing more carbon gases into the atmosphere.

Hence Desch’s scheme to use wind pumps to bring water that is insulated from the bitter Arctic cold to its icy surface, where it will freeze and thicken the ice cap. Nor is the physicist alone in his Arctic scheming: other projects to halt sea-ice loss include one to artificially whiten the Arctic by scattering light-coloured aerosol particles over it to reflect solar radiation back into space, and another to spray sea water into the atmosphere above the region to create clouds that would also reflect sunlight away from the surface.

All the projects are highly imaginative – and extremely costly. The fact that they are even being considered reveals just how desperately worried researchers have become about the Arctic. “The situation is causing grave concern,” says Professor Julienne Stroeve, of University College London. “It is now much more dire than even our worst case scenarios originally suggested.’

Last November, when sea ice should have begun thickening and spreading over the Arctic as winter set in, the region warmed up. Temperatures should have plummeted to -25C but reached several degrees above freezing instead. “It’s been about 20C warmer than normal over most of the Arctic Ocean. This is unprecedented,” research professor Jennifer Francis of Rutgers University told the Guardian in November. “These temperatures are literally off the charts for where they should be at this time of year. It is pretty shocking. The Arctic has been breaking records all year. It is exciting but also scary.”

Nor have things got better in the intervening months. Figures issued by the US National Snow and Ice Data Center (NSIDC), in Boulder, Colorado, last week revealed that in January the Arctic’s sea ice covered 13.38 million sq km, the lowest January extent in the 38 years since satellites began surveying the region. That figure is 260,000 sq km below the level for January last year, which was the previous lowest extent for that month, and a worrying 1.26 million sq km below the long-term average for January.

In fact, sea ice growth stalled during the second week of January – in the heart of the Arctic winter – while the ice cap actually retreated within the Kara and Barents seas, and within the Sea of Okhotsk. Similarly, the Svalbard archipelago, normally shrouded in ice, has remained relatively free because of the inflow of warm Atlantic water along the western part of the island chain. Although there has been some recovery, sea ice remains well below all previous record lows. 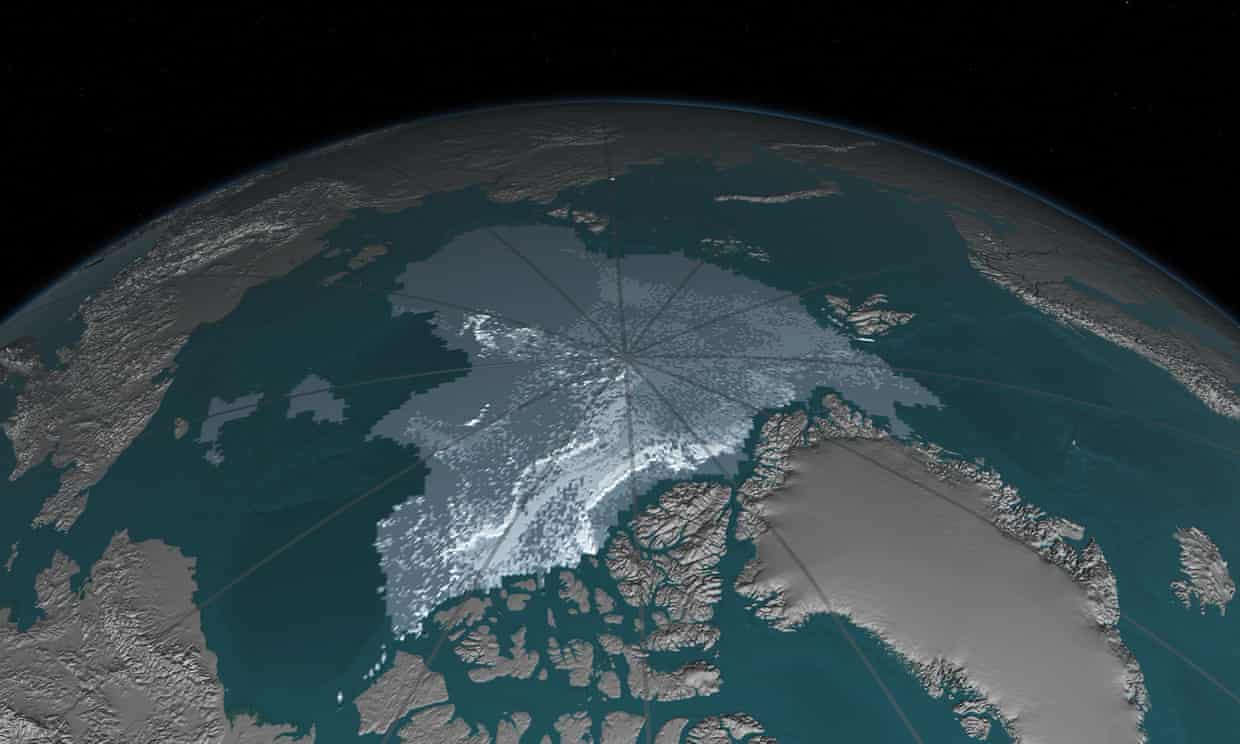 The area covered by Arctic sea ice at least four years old has decreased from 1,860,000 sq km in September 1984 to 110,000 sq km in September 2016. In this visualisation, the age of the ice is indicated by shades ranging from blue-gray for the youngest ice to white for the oldest. Photograph: Scientific Visualization Studio/Nasa

This paucity of sea ice bodes ill for the Arctic’s summer months when cover traditionally drops to its lower annual level, and could plunge to a record minimum this year. Most scientists expect that, at current emission rates, the Arctic will be reliably free of sea ice in summer by 2030.

By “free” they mean there will be less than 1m sq km of sea ice left in the Arctic, most of it packed into remote bays and channels, while the central Arctic Ocean over the north pole will be completely open. And by “reliably”, scientists mean there will have been five consecutive years with less than 1m sq km of ice by the year 2050. The first single ice-free year will come much earlier than this, however.

And when that happens, the consequences are likely to be severe for the human and animal inhabitants of the region. An ice-free Arctic will be wide open to commercial exploitation, for example. Already, mining, oil and tourism companies have revealed plans to begin operations – schemes that could put severe strain on indigenous communities’ way of life in the region.

Equally worrying is the likely impact on wildlife, says Stroeve. “Juvenile Arctic cod like to hang out under the sea ice. Polar bears hunt on sea ice, and seals give birth on it. We have no idea what will happen when that lot disappears. In addition, there is the problem of increasing numbers of warm spells during which rain falls instead of snow. That rain then freezes on the ground and forms a hard coating that prevents reindeer and caribou from finding food under the snow.”

Nor would the rest of the world be isolated. With less ice to reflect solar radiation back into space, the dark ocean waters of the high latitudes will warm and the Arctic will heat up even further.

“If you warm the Arctic you decrease the temperature difference between the poles and the mid-latitudes, and that affects the polar vortex, the winds that blow between the mid latitudes and the high latitudes,” says Henry Burgess, head of the Arctic office of the UK Natural Environment Research Council.

“Normally this process tends to keep the cold in the high north and milder air in mid-latitudes but there is an increasing risk this will be disrupted as the temperature differential gets weaker. We may get more and more long, cold spells spilling down from the Arctic, longer and slower periods of Atlantic storms and equally warmer periods in the Arctic. What happens up there touches us all. It is hard to believe you can take away several million sq km of ice a few thousand kilometres to the north and not expect there will be an impact on weather patterns here in the UK.”

For her part, Stroeve puts it more bleakly: “We are carrying out a blind experiment on our planet whose outcome is almost impossible to guess.”

This point is backed by Desch. “Sea ice is disappearing from the Arctic – rapidly. The sorts of options we are proposing need to be researched and discussed now. If we are provocative and get people to think about this, that is good.

“The question is: do I think our project would work? Yes. I am confident it would. But we do need to put a realistic cost on these things. We cannot keep on just telling people, ‘Stop driving your car or it’s the end of the world’. We have to give them alternative options, though equally we need to price them.”

The Arctic ice cap reaches its maximum extent every March and then, over the next six months, dwindles. The trough is reached around mid-September at the end of the melting season. The ice growth cycle then restarts. However, the extent of regrowth began slackening towards the end of the last century. According to meteorologists, the Arctic’s ice cover at its minimum is now decreasing by 13% every decade – a direct consequence of heating triggered by increased levels of carbon dioxide in the atmosphere.

Climate change deniers claim this loss is matched by gains in sea ice around the Antarctic. It is not. Antarctic ice fluctuations are slight compared with the Arctic’s plummeting coverage and if you combine the changes at both poles, you find more than a million sq km of ice has been lost globally in 30 years.